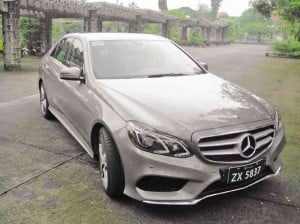 THE E300 Avantgarde has a sporty, more aggressive look.

While the S-Class is globally recognized as the flagship of Mercedes-Benz, the E-Class is the Stuttgart-based manufacturer’s core product and most important car in terms of profits generated and derivatives spanned. E originally stood for einspritzmotor or fuel-injected engine. In the last 60 years, more than 13 million E-Class models have been sold worldwide with the current version, introduced in 2009, attracting 700,000 buyers for the sedan and 100,000 for the estate wagon.

For the 2013 model year, Mercedes-Benz comprehensively revised the 2009 E-Class series (sedan, estate, cabriolet and coupe) with a more aggressive, more intense yet still elegant style idiom,  new, more efficient engine choices, and 11 new or optimized safety and driver-assistance systems presaging the autonomous S-Class that stole the show at the 2013 Frankfurt Motor Show last week. An analysis of 30 published reviews and test drive reports in the United States has rated the 2013 E-Class as the best out of 13 full-size luxury cars.

In the Philippines, CATS Motors, the importer and distributor of Mercedes cars, trucks and parts, offers the 2013 E300 Avantgarde variant with the AMG Sport package.  The Avantgarde design and equipment line is distinguished from the base model and Elegance line by a new two-louver radiator grille with the large Mercedes star in the center, a sport-tuned suspension positioned 15 millimeters lower than the other variants, five-twin spoke light alloy wheels, rear bumper with chrome trim strip and chromed rectangular twin tailpipes. Overall, the 2013 E300 looks more elongated and elegant, yet dynamic and composed at the same time. 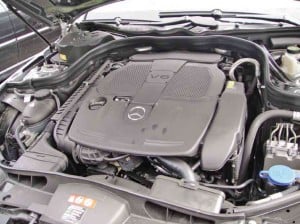 POWERTRAIN. The E300 has a 3.5-liter V6 petrol engine producing 252 HP and 340 Nm max torque through a seven-speed automatic transmission with direct select lever and direct select shift paddles mounted on the steering column. However, the V6 powertrain cannot make the E300, which weighs over 1.74 tons and is more than 16 feet long and 6 feet 1 inch wide, as quick or as agile as competing BMW and Audi models.  Not that Mercedes-Benz ever made that claim for the E300, which is noted more for its composed handling, riding comfort and smooth, balanced performance rather than sport sedan athleticism.

Despite its size and heft, Mercedes-Benz claims that the E300 can accelerate from zero to 100 kph in 7.1 seconds and reach a top speed of 250 kph. The V6 engine, brakes and chassis are strong, inspiring confidence and an almost serene stability at highway speeds. It is exceptionally pleasant, pleasurable and reassuring to drive the E300, whether on the expressway or in urban stop-and-go traffic. The electro mechanical Steering Assist is well-weighted and accurate, although wide understeer and a bit of body lean can be noticed when charging into corners.

INTERIOR. The cabin, retaining the commodious five-passenger (including driver) dimensions of its predecessor, has been luxuriously reworked with high-quality materials such as nappa leather, aluminum trim and burr walnut wood that stretches across the entire dashboard. The comfortable, supportive front and rear seats offer ample head and legroom while the new multifunction steering wheel retains buttons and paddles for cruise control, indicators, wipers, gear change and steering wheel adjustment. There are two cupholders in the center 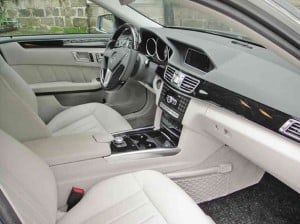 console, but the door pockets are small and narrow. A 7-inch TFT color display, an art deco-reminiscent analogue clock between the two central air vents and the three-tube instrument cluster complete the refined, meticulously crafted interior to harmonize with the elegant E300 exterior.

Mercedes-Benz provides the following as standard equipment in the E-Class: a sliding/tilting glass sunroof, Infotainment consisting of an Audio 20 CD radio with a twin tuner, MP3-capable CD player, a USB connection in the center armrest, Bluetooth connectivity and SMS text messages shown on the 7-inch central display. CATS Motors tosses in the following options as standard in the E300: Harman Kardon Logic 7 surround sound system, power rear sunshades, manual sunshades for rear side windows and power trunk lid. The E300’s trunk, by the way, is one of the roomiest in this segment.

SAFETY. Behind the scenes, a raft of sophisticated technologies is at work to keep the E300’s occupants safe from harm.  Aside from nine airbags and ABS, the list of active and passive safety features is too long for this column, so here are a few of the more significant ones:  Adaptive Brake with hold function and hill start assist; Attention Assist warns the driver about inattentiveness and drowsiness across a wider speed range, also about his level of fatigue and the amount of driving time that has elapsed since the last break; Pre-Safe Plus can recognize an imminent rear-end collision, so the driver of the vehicle following behind is warned by the activation of rear warning lights with increasing frequency, after which occupant protection measures are triggered; Active Parking Assist enables automated parking with active steering and brake control in both parallel and end-on spaces.

The E300 Avantgarde has five three-point seatbelts, front height-adjustable, rear with automatic belt height adjustment, while those for the driver and front-seat passenger have belt 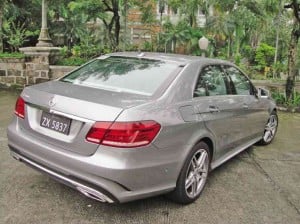 tensioners with two-stage belt-force limiters.  These limiters literally hug the driver and front passenger into their seats, reassuring and reminding you of the E300’s outstanding array of innovative, cutting-edge safety equipment that underscores Mercedes-Benz’s pole position as a safety pioneer.

Summing up, the 2013 E300, with its new style idiom and host of clever safety and driver assistance systems, exemplifies excellence, elegance and refinement to the umpteenth degree in the large luxury sedan segment. At P5.68 million, the E300 Avantgarde AMG Sport is pricey but hey, this is a big, awesome, 2013 Mercedes.