‘No better car on earth’ 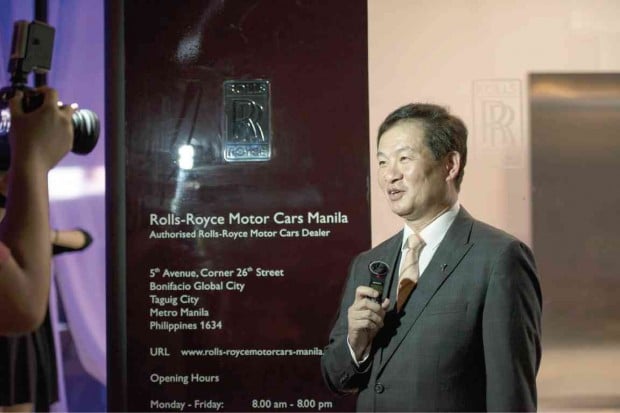 The head of British luxury carmaker Rolls-Royce Motor Cars believes that the Philippines is not about to run out of its fair share of “ultra high net worth individuals,” who are all set to take on the utmost in automotive affluence.

For Torsten Müller-Ötvös, chief executive officer of Rolls-Royce Motor Cars, these are the country’s industry captains, the pillars of economic growth, who are highly discerning and could never accept a “no” or a comprise.

“Rightfully so, because when you’re in the league to buy a Rolls-Royce, you can’t expect any comprises,” noted Müller-Ötvös, who was in the country recently to grace the opening of the Rolls-Royce interim show at the Bonifacio Global City.

“We are a truly British brand and Rolls-Royce is the pinnacle of automotive luxury—there is no better car on Earth. And if you are used to the best in your life, then there is no other way but to select Rolls-Royce. What unites us with our customer group is the fact that we’ve always strived for perfection,” he further said in a recent media roundtable. 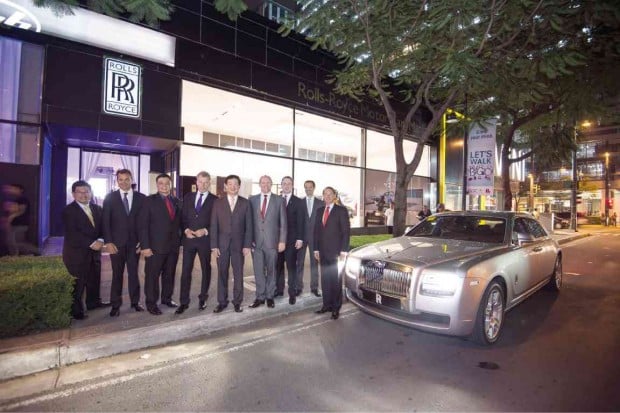 According to Müller-Ötvös, setting up a dealership operation in Manila was an “excellent” decision on their part, as he pointed out the local economy’s robust growth over the past year, which has translated to the increased and stronger purchasing power of many Filipinos. Projections made by neutral offices, in fact, point to the Philippines seeing a rising number of high net worth individuals over the years.

“There are very few countries in the world that can claim a 7.5-percent growth rate and that’s extraordinary… We are watching closely the segment of ultra high net worth individuals. I’ve met with 15 captains of industry in Manila [last week] and I was really impressed listening to them and their expectations,” Müller-Ötvös said.

The dinner on Wednesday last week was held in line with the inauguration of an “interim” or a temporary showroom at the Bonifacio Global City.

Müller-Ötvös explained that they had to open an interim or a temporary facility to cater to the demand from local customers. The showroom is expected to be completed by next year. 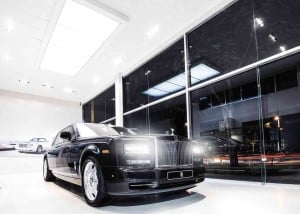 THE PHANTOM on display at the Rolls-Royce showroom

Rolls-Royce’s Phantom, Ghost and Wraith motor cars will be made available in the country by British Bespoke Automobiles, the British firm’s official importer-dealer for Manila. Starting price for the Ghost alone was earlier pegged at P25.9 million, inclusive of taxes.

“We have opened our first operational space where our customers can design [and] their try own, unique Rolls-Royce motor car. Commissioning a Rolls-Royce takes time and consideration, and we’re pleased to have this space to engage with our customers,” noted Willy Tee Ten, president of British Bespoke Automobiles.

“The arrival of Rolls-Royce in the Philippines signifies our belief in this country’s economy and demonstrates the desire from our discerning customers in this region for the ultimate in super luxury. Rolls-Royce Motor Cars has been well-received since the dealership appointment in June, and we are pleased to display in the new facility the first Phantom Series II Extended Wheelbase in the country,” Müller-Ötvös further explained.

According to Müller-Ötvös, the reception has been “fantastic” and first reactions have been positive. He declined, however, to cite the number of reservations they have received nor their sales targets, noting only that  those who came to the inauguration of the showroom on Wednesday night were “highly interested.”

He disclosed that similar to most markets, most of these ultra high net worth Filipinos he had met have shown preference for the Ghost model. He, however, is optimistic that Filipinos will also be keen on taking the other models as well.

“I’m also convinced that the [new model for] Wraith, which will be launched here in November, will be a very successful car in the Philippines. The Wraith is meant for the self-driving gentleman. The customers I met [last Wednesday night] had big expectations, and they are quite keen on the Wraith and the Ghost,” Müller-Ötvös said.

As early as June this year, British Bespoke already had around 30 inquiries from prospective clients, which include the likes of  businessmen like Manuel V. Pangilinan. Ten had said then that they are hoping for vehicle sales to reach a “double-digit” figure on Rolls-Royce’s first year of operation here.  But the limiting factor, Ten earlier noted, was the capacity of the Rolls-Royce factory to supply the vehicles, especially for the “bespoked” or customized units.