The Paceman: Maximizing the MINI Cooper 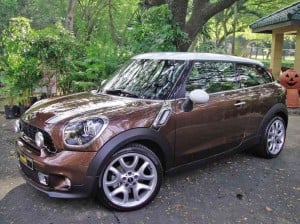 The 2013 MINI Paceman is wider, longer and heavier than the MINI Cooper Coupé.

Just when everyone thought that BMW had completed its MINI lineup with six models (the standard MINI Cooper hatchback, Convertible, Clubman, Coupé, Roadster and Countryman) last year at the Paris Auto Show, the Bavarian luxury car manufacturer unveiled a seventh model, the Paceman, as its first Sports Activity Coupé in the premium compact segment. Built on the same platform as the Countryman with the same styling inside and out except for the rear and powered by the same range of gasoline engines, the Paceman is a four-seater with two doors, a large tailgate and a princely retail price.

Having two doors, the Paceman can be categorized as a coupé yet it is 38 centimeters longer, 10.2 cm wider and 181.4 kilograms heavier than the MINI Coupe. The Paceman also has an AWD variant like the Countryman ALL4 and a high-performance John Cooper Works (JCW) version, but these are not yet offered by MINI Philippines, otherwise known as British United Automobiles  Inc. under the Auto Hub aegis in Bonifacio Global City. 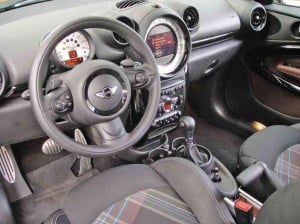 In the cockpit, a huge speedometer, square infotainment display and chromed toggle switches

The front end of the Paceman follows the MINI’s unique design idiom: muscular, pugnacious and wide-stanced, while the rear end deviates from tradition via massive horizontal taillights surrounded by chrome trim and the name Paceman in gigantic letters across the tailgate. The Paceman’s chopped, coupé-style roofline is rakishly lower than the Countryman’s, reducing the ride height by 1 cm. The tailgate opens high for easy access to the luggage area whose capacity increases from 330 liters to 1,080 liters when the rear seat backrests are folded down.

The Paceman’s interior stays true to the MINI’s dashboard architecture since 2007 with aeronautically inspired chromed toggle switches overhead and in the center stack, an enormous  dinner dish-like speedometer containing a digital speed readout in the rev counter, an odometer and a gearshift indicator plus a rectangular infotainment display in a big round disc at the center of the dash. While attention to detail, build quality and cabin insulation are impeccable as befits a BMW vehicle, learning what functions the numerous toggle switches perform requires some time and experimentation. Finally, the power window switches are now conveniently integrated in the door trim, not in the center stack. 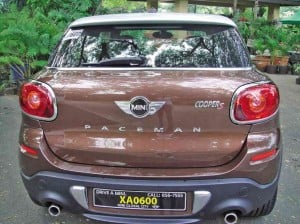 Looks stylish and sassy, but is the Paceman just a three-door MINI Countryman?

In the Paceman S test unit, the front and rear seats are leather bucket seats, supportive and comfy enough although legroom in the back is cramped for rear seat passengers. Because the Paceman is wider and longer than the standard MINI, shoulder room and headroom in front gain an inch or so and access to the back is a bit easier. Parallel aluminum rails on the floor dividing the front and rear seats are handy for stowing small items like sunglass cases and mobile phones. There are two cupholders in front and enough space in the door trim to hold bottled water.

Driving a MINI has always been associated with go-kart agility and handling. The question arises whether the Paceman, because of its larger dimensions and heavier curb weight, can deliver that go-kart feeling. After test-driving a Paceman S, I would answer in the affirmative—provided you constantly stay in the Sport mode.

Forget about the 122-horsepower nonturbo Paceman (P2.588 million) which requires 11.5 seconds to hit 100 kilometers per hour from standstill and whose top speed is 184 kph. Go for the Paceman S (P3.088 million) powered by a direct-injected, variable-valve 1.6-liter DOHC 4-in-line 184-HP engine equipped with a twin-scroll Borg-Warner air-to-air cooled turbocharger feeding off the exhaust. The S engine’s 240-Newton-meter max torque leaps to 260 Nm in brief overboost mode, much of which comes on at a low 1,800 revolutions per minute from the 1,700-4,500 rpm overboost range. The incisive 6-speed manumatic torque-converter gearbox can hold shifts to the 6900 rpm redline to propel the 3,200-pound Paceman S from zero to 100 kph in 7.5 seconds. The Paceman S’ top speed as claimed by the manufacturer is 212 kph, yet average fuel consumption is 10 kilometers per liter of premium unleaded gasoline. 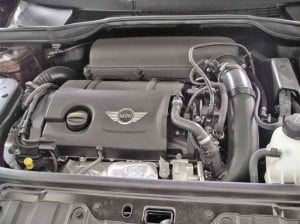 The Paceman S’ electric power steering is sharp and lively, but feels underboosted in crawling traffic. The chassis consists of MacPherson spring strut front axle and forged cross members in tandem with multilink rear axle. In the 2013 Paceman, a lowered sports suspension and Dynamic Stability Control are standard equipment and these, together with the high torsional rigidity of the body, contribute to the car’s safety and nimbleness. But the sport-tuned suspension translates into a stiffer, less cushy ride and poor reaction to bumps on the road.

Although the Paceman S’ performance is linear and the brakes are strong, its heft affects its sporty aspirations while the longer wheelbase cuts its cornering ability compared with the standard MINI Cooper.

You feel burdened by the car’s extra weight whenever you accelerate. Moreover, the Paceman S’ engine note is lackluster with no low, aggressive exhaust burble like a rally car’s.

On the other hand, the Paceman is fitted with an impressive array of safety gear including front and side airbags, side curtain airbags for both rows of seats, three-point inertia-reel seatbelts, belt tensioners and belt force limiters, and Rear Park Distance Control. The Paceman S has Radio MINI Visual Boost, Xenon headlights and adaptive headlights.

Some people theorize that after noting that the basic MINI Cooper and the Countryman are the top-selling MINI models, BMW developed the Paceman to combine the best features of the two. Indeed, the Paceman displays the sassy MINI Cooper personality with the extra space and attitude of a crossover. The not-so-mini Paceman is easy and pleasant to drive and stylish to behold but, inevitably, the fun-to-drive mantra has been diminished by its size and weight. For a full measure of that priceless go-kart feeling, the Paceman’s smaller, less pricey siblings are available.