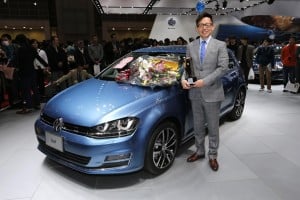 In a contest that was expected to see the Golf trade blows with the Honda Fit/Jazz for honours, the Golf polled strongly from the outset and ended up amassing a commanding 504 votes from the 60 jurors in attendance. The Fit/Jazz came in second with 373 votes and the Volvo V40 placed third with 167 votes.

“This is a very special award for us in so many ways. Firstly, our Golf 7 has become the first ever imported car to win Japan’s COTY award, and we achieved this in our 60th year since Volkswagen imports started into Japan,” commented Shigeru Shoji, president of Volkswagen Japan.

The ‘Special Achievement Award’ went to the Daihatsu Move for its front seat lift design, technology created to assist senior citizens and people with disabilities.