Hydrogen-eration: fuel of the future 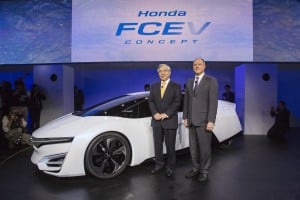 DETROIT—Cars that run on hydrogen and exhaust only water vapor are emerging to challenge electric vehicles as the world’s transportation of the future.

At auto shows on two continents Wednesday, three automakers were unveiling hydrogen fuel-cell vehicles to be delivered to regular people as early as spring of next year.

Korea’s Hyundai Motor Co. will be the first to the mass market in the United States with a hydrogen-powered Tucson small SUV for lease next spring. Details were to come later Wednesday at the Los Angeles Auto Show. Earlier, at the Tokyo Motor Show, Toyota announced plans for a mass-produced fuel-cell car by 2015 in Japan and a year later in the United States. Honda also will reveal plans at the LA show for a car due out in 2015.

Hydrogen cars are appealing because unlike electric vehicles, they have the range of a typical gasoline car and can be refueled quickly. Experts say the industry also has overcome safety and reliability concerns that have hindered distribution in the past.

But hydrogen cars still have a glaring downside—refueling stations are scarce, and they’re costly to build. And critics say they’re still a long way from mass production.

Even as battery-powered and hybrid-electric cars publicly took on conventional gasoline models the past few years, automakers continued to research and develop hydrogen fuel cells, said Paul Mutolo, director of external partnerships for the Cornell University Energy Materials Center. Manufacturers were able to overcome safety and reliability concerns and now are limited only by costs and the lack of filling stations, he said.

Hydrogen cars, Mutolo said, have an advantage over battery-powered electric cars because drivers don’t have to worry about running out of electricity and having to wait hours for recharging.  “It’s very similar to the kind of behavior that drivers have come to expect from their gasoline cars.”

Hydrogen fuel cells use a complex chemical process to separate electrons and protons in hydrogen gas molecules. The electrons move toward a positive pole, and the movement creates electricity. That powers a car’s electric motor, which turns the wheels. “You’re literally ripping the electrons from inside the molecule, generating electricity,” Mutolo said.

Since the hydrogen isn’t burned, there’s no pollution. Instead, oxygen also is pumped into the system, and when it meets the hydrogen ions and electrons, that creates water and heat. Only water vapor comes out of the tailpipe. A fuel cell produces only about one volt of electricity, so many are stacked in a car to create enough juice.

Hydrogen costs as little as $3 for an amount needed to power a car the same distance as a gallon of gasoline, Mutolo said.  AP