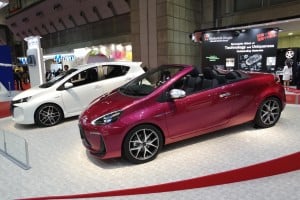 For the first time since it was begun in 1954, the Tokyo Motor Show’s (TMS) symbol this year is a small dark blue car with a red heart beating at its center, ringed by bright orange, yellow, yellow-green and lighter blue colors.  The pulsating heart stands for the passion poured by automobile manufacturers into developing the future vehicles which are showcased in the 43rd TMS. The warm red heart also signifies the carmakers’ hope that experiencing the “new future” of sustainable, eco-friendly mobility would energize and bring a smile to the faces of visitors.

Organized every two years by the Japan Automobile Manufacturers Inc. (Jama), the 43rd TMS 2013 opened to the public on Nov. 23  and runs through Dec. 1 after press preview days Nov. 20 and 21, and a special guest day and opening ceremony on Nov. 22.

HEART PROJECT. Was it a coincidence or just mere luck, then, that the 43rd TMS 2013 was the venue where Toyota Motor Corp. announced to the world the Toyota Heart Project? At first, this announcement may not seem as spectacular as the 76 world premieres and 81 Japan premieres presented by various Japanese and European car manufacturers, but underneath that simple, heartwarming nomenclature, Toyota engineers and scientists are working quietly to lead the global automotive industry in the development of  futuristic technologies.

At the Mobilityscape Tokyo program held by Jama for Japanese and global media on Nov. 19, Jama president and concurrently Toyota Motor Corp. president Akio Toyoda set the tone by reviewing the progress of the Japanese automobile industry from its dawn in 1954, when Japan was still learning how to make cars from more experienced US and European manufacturers, to the development of innovative technologies like Mazda’s rotary engine, Honda’s CVCC  engine, the Fairlady Z, Mitsubishi Lancer Evolution and the Toyota 2000GT which are etched into the annals of automotive history.

SMILES ON CUSTOMERS’ FACES. More recently, hybrid technologies and electric vehicles have taken center stage as Japanese manufacturers provide the world with new technologies that are ahead of their times, Toyoda said.  He pointed out that “these innovative technologies in passenger cars, commercial vehicles and motorcycles have led to prosperity in people’s daily lives and for society as a whole, allowing us to put smiles on customers’ faces.  And these innovations have continuously fostered industries in new fields, thus contributing to sustainable economic growth by creating new investment and jobs.”

The goal to “put smiles on customers’ faces” was echoed the next day, Nov. 20, by Toyota executive vice president Mitsuhisa Kato during the press briefing held at the Toyota booth in the TMS when he introduced the Toyota Heart Project.  Toyota faces a new challenge, Kato said, in the Heart Project. “As times change, cars will evolve more and more.  But no matter how much cars evolve, there should always be something about them that must not change.  We must not turn cars into a simple means of transport—a tool.  As carmakers we are forever committed to cars.  For our customers, we want to continue being that irreplaceable presence, always providing them with their own piece of happiness to own, drive and talk about.”

WE LOVE CARS. Citing the Toyota 86, Crown, Avalon and RAV4 as vehicles pursuing the “Toyota ReBorn” slogan, Kato said: “We don’t want a car that people neither love nor hate.  We want to make cars that people fall madly in love with, cars that convince them they could never drive anything else.  That’s the direction our vehicle development is taking… In the future we see, our customers are all smiling because of our cars.  At Toyota, our slogans are ‘Fun to drive, again’ and ‘We love cars.’  Going forward, we’ll continue making great cars.”

One of these great cars of the future could be the Toyota FV2.  Artificial intelligence technology developed through the Toyota Heart Project makes possible the heart-to-heart communication between driver and vehicle as exemplified in the FV2 Concept Car.  Instead of a steering wheel, the FV2 has a special system that allows the driver to move the vehicle by shifting his or her body back, left and right.  In the FV2, Toyota aims to realize the emotional connection by fostering a driver-to-vehicle relationship similar to the trusting relationship a rider may share with his or her horse.  The FV2 uses voice and image recognition to guess the mood of the driver, employs the compiled driving history to recommend destinations and assists the driver  by supplying information about driving skill.

Indeed, as Toyoda said in the Jama Chairman’s Message of the 43rd TMS 2013  News, Japan set out to establish the TMS “as the top technology motor show in the world” with the 2020 Summer Olympics in focus. Who knows? When Tokyo hosts the Olympic Games in 2020, driverless cars will whiz VIPs on designated lanes through the traffic-choked capital, and city buses powered by fuel cells will be commonplace, thanks to the passion and heart of Japan’s auto manufacturers devoted to evolving future mobility.