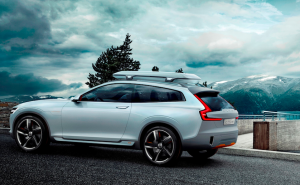 “Enjoying a car with great power and capabilities, at the same time as you are safe and protected, gives a great feeling of joy and freedom,” said Thomas Ingenlath, senior vice president for design at Volvo Cars.

The Concept XC Coupé is also presented alongside a separate interior sculpture.

For more information, go to www.eyesondesign.org/auto-show-awards.