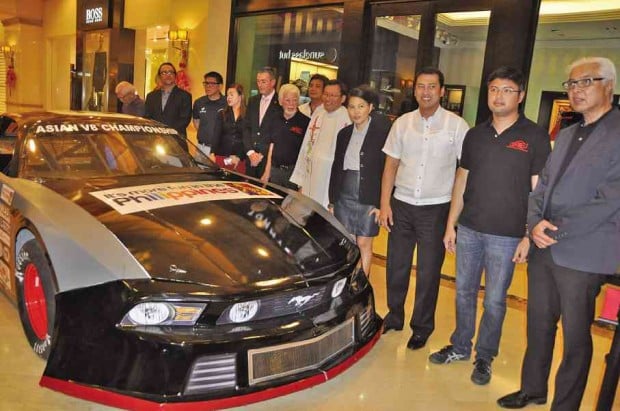 Barely a year after Philippine motorsport got embroiled in a controversial Nascar event in the United States, a group of Filipino racing enthusiasts are hoping to erase that stigma by bringing Nascar here and creating an international race on home turf.

This vision would be formally announced to the public during the grand launch on Feb. 27, 6 p.m., at the Resorts World Manila Atrium.

Eight late-model Nascar race cars with brand-new engines and 16 international drivers would be featured in the AV8C which is slated to start this April. As of press time, the countries that had already signified interest in coming over to test races here are Australia, Japan and Macau.

Each Nascar race unit costs an estimated $80,000 to $100,000, while the operating cost of the AV8C has been pegged at P10 million (to run the show for one championship season). Each car is powered by a 5.7-liter Chevrolet V8 engine producing 450 horsepower and can reach speeds of up to 329.92 kilometers per hour. The top speeds, however, would depend on the length and layout of the track, according to Enzo Pastor, who will be competing in the AV8C. AV8C officials estimate that it would be usual to see cars speeding along between 230 and 240 kph if the Clark International Speedway were to be used, or 205 and 210 kph if it were the Batangas Racing Circuit (BRC).

Enzo is the son of PFAFI founder and AV8C co-organizer Tom Pastor.

The group unveiled one of the eight Nascar units during the Feb. 13 press conference. The elder Pastor also revealed the race dates: April 5 and 6; May 3 and 4; and either June 7 and 8 or July 5 and 6. The venue of the April race is set in Clark International Speedway; May in the BRC.  June or July will be set in either of the two circuits.

The race dates, said Tom, “are a moving target and (we’re) still finalizing some details this week regarding the final schedules to be announced and race drivers’ confirmation on the AV8C launching (on Feb. 27).”

The competitors’ names will be announced during the Feb. 27 launch and March 1 testing.

“Aside from our presentors DOT/Tieza, Petron, Resorts World and Fox Sport, we would like to see telcos, tire companies, energy drinks and car companies, and other related motorsport equipment/apparel (to lend their support),” said Tom.

Tom enumerated five reasons the AV8C is ripe for the Philippines:

1. It would put the Philippines back on the world map of international motorsports. Neighboring countries “all have F1, GT3, WTCC and supercar events.” AV8C would be the next big thing in the Asian region.

2. AV8C would help develop a new motorsports tourism market and a fan base of Nascar in Asia.

3. AV8C would create for Filipino race drivers the opportunity to compete in the world  races of Nascar.

4. The championships would develop the Philippines as the hub of late-model Nascar for testing, training and competition.

5. It would also create job opportunities for mechanics and technicians, and help facilitate their training. “This is like what we have started from 2002 to 2007 with Asian Formula 3 racing in eight Asian countries, and as of today we have thousands of Filipino mechanics working with race teams around Asia and some parts of the world.”

The news release about the AV8C mentioned “internationally acclaimed drivers from all over the Asian region, VIPs and local Philippine celebrities that like to dabble in racing, including the pride of the Philippines in motorsports Enzo Pastor.”

The release went on: “Last year Enzo Pastor secured honor and recognition for the Philippines at the Nascar Whelen Euro Series … in the iconic tracks in Europe including stops in France, England, Italy and the prestigious Le Mans Race track. At the end … Enzo finished the championship in the Magic 6 … the first Filipino/Asian to be awarded in the Nascar Hall of Fame, at the home of Nascar in Charlotte, North Carolina.”

When Inquirer Motoring asked about an issue that could arise due to Enzo’s affiliation with the PFAFI president and founder Tom, and his edge in the Nascar, the elder Pastor said, “The cars are equally done, have the same specifications, and before they race, they exchange keys, there’s no permanent car (for each player).”

Tom added that Enzo may have the advantage in terms of Nascar experience, but prodrivers in Asia have already experienced F1 and F3 races. “It really depends on how they perform on the race track.”

Enzo said: “All the engines are brand-new, the chassis are the same. There would be no advantage for me because all the cars will be set up the same, and all drivers have been competing internationally.”

As of press time, Enzo is still on the lookout for a race teammate.

Official tests begin March 1 at the BRC in Rosario, Batangas. During the three two-day festivals to be held at the BRC and Clark from April to June or July, there would also be car shows, car club eyeballs, DJ performances onsite and support races by Circuit Showdown, a grassroots motorsports event which holds both time trial and wheel-to-wheel racing.

The organizers noted: “In pursuit of Philippine motoring tourism, the prizes and incentives for the champions of the AV8C in the Asian Open and Pro categories will be qualified to race in Europe, in the Nascar Whelen Euro Series and in the United States, in the K&N Pro Nascar Series.”