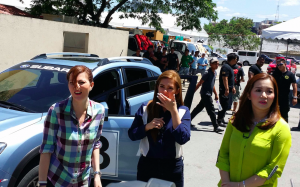 The 2014 Manila International Auto Show (MIAS) opened its doors yesterday with a great start as Senate President Franklin Drilon together with other invited guests graced the opening ceremony festivities that led to several car launches that followed during the day.

While the opening ceremonies were underway, Kris Aquino and her co-hosts from the popular morning show Kris TV Carmina Villaroel and Shaina Magdayao visited the MIAS to check out some of this year’s highlights. Kris, together with her co-hosts rode shotgun with drift racecar drivers Atoy Llave of Atoy Customs and Pilipinas Got Talent finalists Ralph Tan and Gio Rodriguez on the driveway of the World Trade Center. Kris even sent out Instagram and Tweets about her first hand experience riding on a drifting experience. 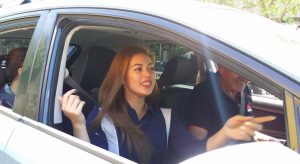 She also visited some of the displays there including some of Atoy Custom’s creations like the Uratex mobile bedroom showroom bus and other food trucks, designed for corporate and mobile marketing events. Being highly mobile herself, she appreciates the features of having a fully functional vehicle that can serve as a retail food or showroom outlet at the same time.

Kris also went to pass by some of the vehicles on display stopping over to talk to the sales and marketing advisors asking about the car features and specifications that took her interest. This writer was surprised to learn that she even appreciates classic cars like a rare 912 Porsche Targa and Datsun 240Z displayed on the main hall of World Trade Center. “Yung Datsun ay dating name for Nissan right? Alam ko yan!” she said with pride.

Lastly, she and her co-hosts rode with UK precision and stunt driver Russ Swift, who was in the MIAS to perform his Guinness Record-breaking stunt shows and kept screaming as they rode in two-wheels, j-turns and donuts with the famous stunt driver.  The Manila International Auto Show runs from April 3 to 6, with show hours from 10am to 10pm at the World Trade Center.