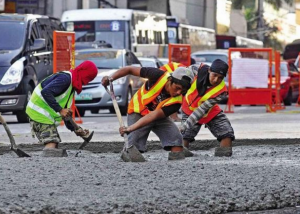 Expect very slow traffic on EDSA on Holy Week, as repair and concrete reblocking of at least 94 sections of the city’s main thoroughfare is set to begin on Holy Tuesday. The Department of Public Works and Highways (DPWH) has advised those going to the provinces to leave Metro Manila early in the week.

Metropolitan Manila Development Authority (MMDA) Chair Francis Tolentino said that due to the repairs, “portions of Shaw Boulevard, Ayala, Buendia and Kalayaan would be almost closed to traffic so the impact on traffic would be huge.”

“Bus companies should inform their passengers early on that their travel time would be longer by roughly three hours,” he added.

Rey Tagudando, DPWH-Metro Manila director, said at least eight private contractors hired by the agency would occupy parts of Edsa from Roxas Boulevard to Monumento. “We hope to complete the reblocking projects on at least 21,000 square meters of Edsa by the end of the Holy Week,” he said in a phone interview with Inquirer.

The DPWH has targeted for rehabilitation 80,000-square meters of Edsa under a P230-million concrete reblocking project. It has finished working on 50,000 sq m. so fa.

The repairs on the southbound lane would start on Holy Tuesday (April 15) and last until Good Friday (April 18). Work on the northbound lane, on the other hand, would begin on Good Friday and end on Monday, April 21.

Although the MMDA has yet to issue alternate routes for motorists, Tolentino asked bus companies to make adjustments. Earlier, he met with bus operators or their representatives to discuss traffic measures the MMDA intended to initiate in the days leading to the Holy Week break.

“We are soliciting their cooperation on this,” Tolentino said, noting that gridlock due to the repair works would be “short-term pain for a long-term gain.” He added: “This is not just a corporate adjustment but a sacrifice.” For commuters with private vehicles, Tolentino advised them to leave the capital ahead of the reblocking projects.

According to data from the Traffic Engineering Center of the MMDA, the majority of Holy Week vacationers start leaving Metro Manila on Holy Tuesday or Wednesday.

With report by Niña P. Calleja