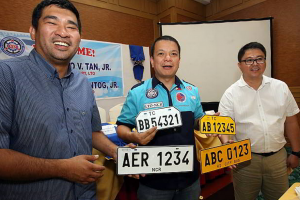 The Land Transportation Office (LTO) has finally presented the new-generation of vehicle license plates, to be rolled out initially in Metro Manila. Transportation Assistant Secretary Alfonso Tan Jr., chief of the LTO, said a simpler and more identifiable design will replace eight million old car plates nationwide. Tan said the new car plates are being introduced in Metro Manila. Vehicles in Central Visayas will begin to sport the new car plates by January.

“We are trying to change 30 years of culture here. They should take time to understand it and if they find any errors they can talk to me and we will discuss it,” said Tan. He said the new set of plate numbers is highly visible from any angle because of its simple minimalist design and its color combination.

The LTO will distribute plate cards with three letters and four number combinations to accommodate the growing number of vehicle registrants. For private vehicles, the plates will be colored black over a white background.  The bottom will state the region where the vehicles are registered.

For public utility vehicles, the plates will be black with a yellow background. The bottom will state the classification of the utility vehicle and the region where it belongs. The upper left side is a bar code that contains information about the vehicle in preparation for a fast inspection on roads with the use of bar code readers.

A special bolt is also provided to prevent people from detaching the car plates. In case the plate cards are removed, Tan said there is a third plate sticker that will be placed on their windshield that will serve to identify the vehicle just like the plate number.

With report by Apple Ta-as