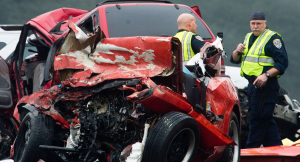 The Anti-Drunk and Drugged Driving Act of 2013 has been a long time coming, and now the Department of Transportation has released the implement rules and regulations (IRR) for the law. That law defines the offense in detail, prescribe the methods for determining levels of intoxication, and set penalties faced by drunken or drug-crazed motorists.

Under the IRR, which take effect next month, a motorist apprehended for a traffic violation and suspected of driving under the influence of alcohol will be subjected to a series of “field sobriety tests”:

The Eye Test (or “horizontal gaze nystagmus”), which requires the driver to look at and follow with his gaze an object that the law enforcer moves horizontally, around one foot away from the driver’s face;

The Walk-and-Turn Test, which requires the driver to walk nine steps forward in a straight line, turn, then walk back the same distance without difficulty;

The One-Leg Stand, which requires the driver to stand on one leg and raise the other leg around six inches from the ground for about 60 seconds.

If the driver passes these tests, he will be apprehended only for the traffic violation committed, and not for violating RA 10586.

If the driver fails any of the three tests, he will then be subjected to a fourth one—using an alcohol breath analyzer.

“(Drivers) cannot have any amount of alcohol in their blood at all, since people’s lives are in their hands,” said Transportation Secretary Joseph Abaya, whose agency released the IRR of Republic Act 10586 on Friday.

A driver who is found to have a blood alcohol concentration (BAC) higher than the prescribed limit— 0.05 percent—will be placed under arrest and his vehicle impounded. If found within the allowed limit, he will be booked only for the traffic violation.

BAC levels vary from person to person and is hinged on several factors, including age, gender, height and weight.   Popular websites drinkers use to help determine their BAC include http://www.rupissed.com.

In cases where a law enforcer has reasonable ground to believe that the driver is under the influence of dangerous drugs or other substances, the driver shall be brought to the nearest police station, where he will be subjected to a drug screening test.

The rules were drafted jointly by the Department of Transportation and Communications, the National Police Commission, Department of Interior and Local Government, and Department of Health.

The IRR are all about reducing road accidents while also building a comprehensive database of accidents with alcohol or drugs as the underlying reason, said DOTC spokesperson Michael Sagcal.

“Drunk driving or driving [ under the influence of drugs] affects not only the driver but also passengers, other motorists, and bystanders. A lot of people are affected,” Sagcal said.

With report by Miguel Camus