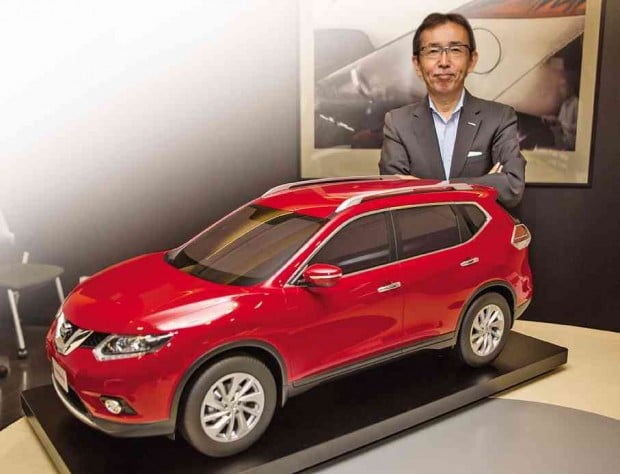 The man who designed fantastic-looking Nissan cars like the 370Z, Murano, GT-R, Juke, Infiniti FX45 and now the Nissan sports car concept (see photo) exudes the energy, dedication and passion of a creative artist.  Interviewed last week by five motoring journalists from Manila at the Nissan Technical Center in Atsugi, Kanagawa, near Yokohama, Nissan Motor Corp. SVP and chief creative officer Shiro Nakamura, 64, answered questions in fluent English, with the confidence and astuteness honed by 40 years of experience in the industry.

Nakamura’s fluency in English can be traced to his studying in Pasadena, California, at the prestigious Art Center of Design, where he earned his Bachelor of Science degree with distinction in transportation design.  (The Art Center of Design considers Nakamura one of their most outstanding alumni, together with Chris Bangle of BMW and J. Mays of Ford Motor.)  Prior to Pasadena, Nakamura got his bachelor of arts in industrial design from the Musashino Art University in Tokyo.  After Pasadena, he worked at General Motors’ Advanced Design Studio in Michigan in 1985.  Before joining Nissan in 1999, he held various senior level positions at Isuzu Motors Ltd.

Nakamura also serves as president of both Nissan Design America and Nissan Design Europe.  As SVP and chief creative officer of Nissan, he manages the global design strategies of both Nissan and Infiniti, leading a team of more than 800 people worldwide.  In 2010, he received Eye on Design’s Lifetime Achievement Award and was ranked No. 4 in Fast Company magazine’s list of the 100 Most Creative People.

IN THE NAME. For Nakamura, design is becoming more of a brand expression.  “It’s not just designing a nice car, we can make any shape. The point is we have to design in the name of the brand, a combination of brand expression of the exterior and the interior.  For example, the X-Trail’s exterior has an exciting design and movement, reflecting the energetic, agile Nissan brand.  Inside, it is welcoming and high-quality.”

Nakamura added that he looks for coherence in the brand.  “Put the X-Trail and the Qashqai together and you wouldn’t say they belong to the same brand.  We want to have a consistent brand expression. So we designed the two cars together, while maintaining the toughness of the X-Trail.” 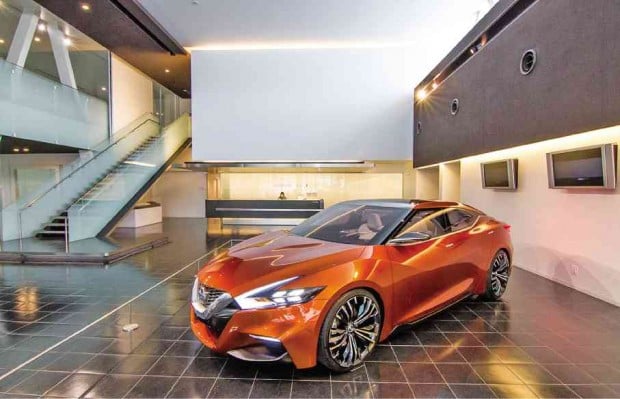 Asked whether there was any external inspiration, such as Nature, in designing the new X-Trail, he answered, “You’re right.  We always are inspired by Nature.  We get more inspiration from the animal, which has a mouth, two eyes and four legs.  Muscles, tough and strong – not a cat or elephant. How do you see this car compared to an animal? All parts of the car are important, but people see the front part as the most important, especially the headlamps as the two eyes express emotions the most.”

LIMITATIONS. The designer has to work with limitations, however.  Nakamura sees these limitations—safety, headlamp performance and cost—as more like challenges. “For safety, you have to design the front for pedestrian impact,” he pointed out.  “The portion that the head hits has to be soft, you have to keep a certain distance between the headlamps and the engine.  So we want to keep the headlamps as small as possible.  Originally, the headlamps were much higher than the daylight running lamps.  Now we incorporate them with the headlamps in a small area.”

Foreseeing the future in terms of selecting the best design that will still be current many years later is the most important part of a designer’s job, Nakamura said. He grasps at myriad inspirations, leading a team outside Tokyo that produced concept cars inspired by shoes, videogames and bumblebees. He admitted that sometimes Nissan made mistakes with too advanced designs that people were not ready for. “Sometimes we push too much or are conservative too much.  A sedan can’t be too radical, it has a history and people expect what a sedan looks like.  The Juke is a crossover and has no history so you can make it look radical.  You have to know which category and in which market you can push further.”

As for Nissan sharing design cues with Infiniti, the company’s luxury brand offshoot, Nakamura said that they keep Nissan design completely separate and there is no sharing as far as design goes.  “We have a front geometric shape for Nissan while for Infiniti it is more rounded and organic.  Infiniti has a more seductive shape, Nissan is more boomerang.  The design language is completely different and separate, although we use a lot of common components.”

BEST TIMES. At the beginning of his career, Nakamura was influenced by Ferrari and General Motors’ Corvette Sting Ray in the 1960s, which he says was one of the best times of car design in history.  The 1930s era was another best time for car design, with flamboyant automobiles such as the Duesenberg and Bugatti. For Nakamura, the best-looking Nissan of all time was the first generation 1965 Datsun Silvia, only 600 units of which were produced from 1965 to 1967.  He said that he recently acquired a 1965 Silvia after many years of looking for one.

Nakamura is a creative artist in more ways than one.  He plays the cello and almost pursued a career in music.  He has been quoted as saying, “Music is very emotional and logical, and the same with design.  Just as composers have to pay attention to details such as tempo and dynamics, car designers have to analyze auto structure.”

He believes that creativity at its best isn’t just doing whatever you want.  Nakamura’s advice to young, aspiring automotive designers: “Designers have to understand the values of society and the people they are creating the vehicles for. Age means experience.  Great designers always sustain their creativity.”