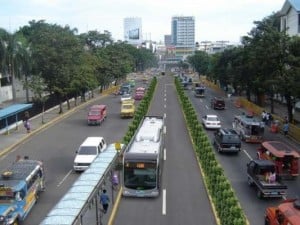 A Bus Rapid Transit (BRT) system is being proposed for Metro Manila and Cebu City by the Department of Transportation and Communications (DOTC). The mass-transport system involves modern buses plying exclusive bus lanes and using specific stations. Crucially, it will not allow buses to veer out of their lane to pick up passengers or jostle with other vehicles. The BRT is sometimes termed a “surface subway” because it aims to combine the efficiency of a subway with a much lower infrastructure cost.

The DOTC said it was planning a Bus Rapid Transit (BRT) system for Metro Manila, which it described as a game-changer in the government’s fight against colorum operators.

A BRT system was earlier approved by the National Economic Development Authority for Cebu City and the department said it has proposed a Manila BRT to serve the Quezon Circle-Manila City Hall route. It said both the Cebu and Manila BRT systems would be made possible with a grant and technical expertise provided by the World Bank.

“The DOTC is now studying other possible BRT locations in Metro Manila, in a bid to provide commuters with a modern, safe, convenient, and efficient mass transit bus system which current transport schemes are unable to offer,” the statement added.

DOTC said the BRT concept began in Curitiba, Brazil in 1974, but the “BRT” name and the system’s popularity did not come until it was introduced in Bogota, Colombia in 2000. Currently, there are over 200 BRT systems either operating or being built worldwide.

“BRTs are game-changers. They are as effective as rail systems in terms of moving people around quickly and efficiently, but are much cheaper to build and are faster to develop,” Transportation and Communications Secretary Joseph Abaya said in the statement.

“Since they will be granted as concessions, their riders will not be at the mercy of ‘colorum’ vehicles or transport strikes.  They will be spared from unnecessary disruptions and unsafe traveling conditions,” he added.

It remained unclear how the Department of Transportation and Communications would proceed with the project given a legal challenge raised by the Filipino consortium Philtrak, which had previously proposed BRT projects in Metro Manila and Cebu.

These were turned down because of the current administration’s preference for “open and transparent” bidding instead of the unsolicited proposal route.

The move prompted the filing  early this year of a petition for mandamus, which called for a halt to the planned P65-billion extension of the Light Rail Transit Line 1 extension to Cavite, and the P62-billion Metro Rail Transit Line 7, which will extend the MRT-3 to Bulacan province.

Philtrak claimed its “subsidy-free” BRT projects, as an alternative to railways, would save billions of pesos in subsidies allotted to existing mass railways in Metro Manila, which require government support to continue operations.

With report by Miguel R. Camus