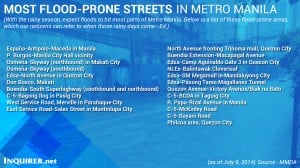 The Metropolitan Manila Development Authority (MMDA) identified 22 flood-prone areas in Metro Manila that the public should avoid, especially during rush hours and heavy downpour. Unfortunately, these include practically all major roads that one would traverse to get from one end of the city to another.

Flood control crews, he added, have been prepositioned in critical areas to respond to emergency calls in the event of a storm warning signal by the state weather bureau.

On a positive note, the MMDA identified 77 ongoing road projects in the metropolis which, when completed, will significantly increase the mobility of motorists and commuters.

MMDA Assistant General for Operations Emerson Carlos said 49 of the 77 projects being undertaken by the Department of Public Works and Highways (DPWH) are road diggings and ongoing drainage works, excluding diggings currently being made by water utility companies which are also vital and needed considering that some of the drainage tunnels are more than 35 years old.

These infrastructure works include the Skyway Stage 3and the NAIA Expressway project that temporarily constrict vehicle occupancy along the road. (Please see attached list).

“While we’ve been experiencing flood-induced traffic delays mainly because of these public works projects, when these are all finished, it is expected that it will bring big relief to the general public,” Carlos said.

He pointed out that the agency decided to announce the list of ongoing road projects to help motorists and commuters plan their travels and schedule.

“We’re advising the public to avoid these areas, especially during heavy downpour in the evenings,” the MMDA official added.

But unlike the past years, localized flooding in Metro Manila has lessened to the point that it no longer necessitates rescue and evacuation during inclement weather, according to Carlos.

“Take the case of San Juan City, which is perennially a flood-prone area but with the completion of three floodwater pumping stations in the city, flooding in the area has almost become non-existent,” Carlos added.