Road rage on EDSA caught on video: Mercedes vs taxi 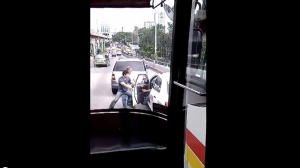 An altercation between the drivers of two vehicles, a Mercedes-Benz SUV and a taxi   along Epifanio delos Santos Avenue (Edsa) was caught on video. The clip immediately went viral on social media.

In the two-minute video shared on Youtube by cisconix, a passenger of a bus that was driving nearby, the driver of the Mercedes Benz and the driver of the taxi were seen arguing when suddenly the Benz’s driver kicked the door of the cab.

A few minutes later, the driver of the Mercedes Benz M-Class pulled out a gun and pointed it at the taxi driver who took a knife from inside his vehicle.

The taxi driver threw the knife back inside his cab while the Mercedes Benz driver kept his gun.

The Mercedes Benz driver then forced his way inside the cab where he got the knife and and continued to threaten its driver.

The bus passenger was heard saying the plate number of the vehicles – KDP 313 (Mercedes Benz) and UVN 607 (taxi).

After the confrontation, the Mercedes Benz drove off but the taxi chased it, cutting off the vehicle, which hit the railing along Edsa.

Both drivers emerged from their transport as another round of arguments ensued. What transpired next is unknown, as the video ends at that point.

The reason behind the altercation remains unclear with INQUIRER.net, as of posting time, trying to contact police for details of the incident.

With report by Nestor Corrales