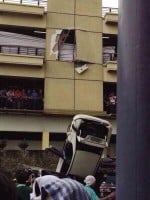 SAN JUAN MALL PLUNGE The driver of the nose-diving car survived—but he may have to pay several others. CHITO DELA VEGA

The driver who smashed his car through a Greenhills parking building to the street below survived with minor injuries. The lesson: always wear your seatbelt, even in the parking lot. The car nose-dived three stories from the multilevel car park and plunged into a couple of parked cars.

A car smashed through the walls of a multilevel car park of a San Juan City mall Friday afternoon and nose-dived three stories down onto the street.

This was after the driver—a TV executive—passed out apparently because of a heart condition and accidentally stepped on the accelerator.

Juanito Nocos, 74, vice president for sales of Basketball TV, survived the fall and was conscious when brought to Cardinal Santos Hospital, according to PO3 Arturo Tale of the San Juan police.

Nocos was declared in stable condition and, thanks to the car’s airbags that deployed upon impact, sustained only bruises on the chest, Tale added. He was reportedly wearing his seatbelt, which also helped reduce his injuries.

Nocos’ Mitsubishi Super Saloon sedan damaged several other vehicles as it went out of control on the third level of the Annapolis Car Park of the Greenhills Shopping Center and on the parking slots on Eisenhower Street where it landed.

Tale said Nocos, who wears a pacemaker, was about to park his car around 3:10 p.m. when he blacked out and inadvertently stepped on the accelerator.

The wayward car caused damage on a Toyota Vios, a Montero Sport, a Honda Jazz and a Ford Ranger, before smashing through a wall made of Hardiflex material and landing in between a Toyota Hi-Ace and a Fortuner that were parked below. The Fortuner was then occupied by a male driver and his three small children.

The children were unharmed but their father suffered foot injuries, Tale said.

Nocos would still be charged with reckless imprudence resulting in multiple damage to property, the officer added.

With report by Vanessa B. Hidalgo