Something to wine about 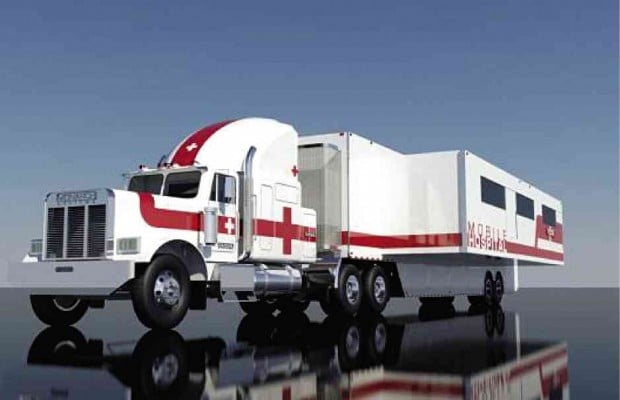 EXTERIOR view of the artist concept of the Hospital on Wheels

Wine aficionado and hotelier Manny Osmeña is cooking up something that deserves a toast.

Through Hope Now Philippines Foundation Inc., Manny O is organizing the Bibulus 2007 vintage Charity Auction next month in his Mövenpick Hotel in Mactan Island in Cebu to kick off an ambitious fund-raising campaign to raise US$10million for a fleet of all-terrain vehicles dubbed “Hospitals on Wheels (HOW)” that will be used for affected areas in the event of a calamity.

Hope Now Foundation Inc. was formed in the aftermath of Supertyphoon “Yolanda.”  After seeing the massive destruction caused by recorded history’s most powerful typhoon and in the events leading up to the World Economic Forum in Metro Manila and its extension summit Ocean 14 in Cebu, where he was a keynote plenary speaker, Osmeña and a number of high profile tycoons, as well as prominent personalities, came up with the foundation to help address the lack of immediate medical care in the wake of a natural disaster.

Among its founding members aside from Osmeña are Lucio Tan of the LT Group, SM’s Tessie Sy-Coson, Tony Meloto of Gawad Kalinga, media personality Karen Davila and Winston Damarillo of World Economic Forum Young Global Leaders. With an initial seed money of US$500,000 (approximately P22 million) contributed by Osmeña, the Hope Now Foundation’s initial mission is to launch an all-terrain mobile first responder vehicles to affected areas in the event of a calamity.

Wine expert and renowned auctioneer John Kapon, a personal friend of Osmeña, has pledged his support for the event. Kapon is the CEO of Acker Merrall & Condit, considered the world’s largest fine wine auction house.

Osmeña vowed to match whatever funds that will be raised from this charity auction, up to the tune of P10 million.

On the auction block that evening will be a Bibulus 2007 vintage, a Bordeaux Cru Bourgeois wine in the Manny O wines signature line that won the Trophée Vin Rouge at the Vinalies Internationales 2013 held in Paris. The Bibulus 2007 vintage came out at the top of the dry red wine category that bested against 1,736 other entries in 2013.

Vinalies Internationales invites over 100 judges from all over the world to assess by blind-tasting some 3,000 entries each year.

HOW will it work

The HOW (Hospital on Wheels) is a mobile clinic that serves as a first responder vehicle that can be rapidly deployed to disaster areas and can also be used in medical missions. The vehicle can be used to provide surgical services, health campaigns like vaccinations, medical research and provide augmented facilities during epidemics.

Its primary goal is to provide the critical medical equipment to respond to emergency situations where proximity to advance medical diagnostics will save countless lives in times of emergencies.

The group has tapped the joint undertaking of top engineering schools like Mapua Institute of Technology and De La Salle University to come up with the designing of these vehicles.  With the proper funding, a total of about 30 units of various configurations can be developed in the event of any calamity.

These can range from units with an operating theater, diagnostics and/or X-ray machines which can be stationed at the disaster site to be surrounded by medical tents for patients’ from partner organizations.