The Chamber of Automotive Manufacturers of the Philippines (CAMPI) will open the 5th Philippine International Motor Show (PIMS) on September 18-21 at the World Trade Center, Pasay City. As part of the exhibition, themed “Progress in Motion,” the member companies: BAIC, BMW, Daewoo, Honda, Isuzu, JMC, Kia, Lexus, Mazda, Mercedes-Benz, Mitsubishi, Nissan, Peugeot, Suzuki, Toyota, and Volkswagen will be showcasing their latest vehicles as well as a slew of vehicles never-before-seen on our shores. Here are some of the vehicles to look forward to during the 5th PIMS:

The new BMW X4 is to the X3, as the bigger X6 is to X5. Simply put, it’s a sportier version of the X3 compact crossover, with a sharply-sloping roof and sculpted body panels. Inside, the cockpit is well laid-out in the BMW tradition, with nifty material choices. The tall ride height gives it more versatility when going on rough roads or while driving in the city, while reportedly still carrying the trademark BMW dynamic driving ability.

Honda enters the booming A-segment with two very competent and well-engineered cars. The Brio and Brio Amaze pack room for four within their compact footprints. The sedan and hatchback use a 1.3-liter iVTEC engine good for 100ps, combined with a five-speed automatic. Power and driving dynamics are at the top of the class, and visitors will enjoy inspecting the decently-trimmed and equipped cabin. 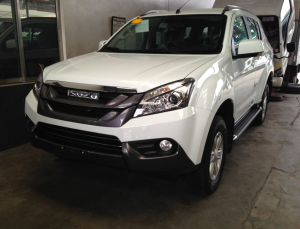 Isuzu’s successor to the venerable Alterra bursts onto the stage, with an all-new body and drivetrain. The body design is shared with the Chevrolet Trailblazer, albeit with some Isuzu-exclusive touches. The seven-seat interior features a folding second and third row, for versatility in carrying more passengers or cargo. MU-X will be powered by a 2.5-liter turbodiesel engine.

Key to the luxury class are compact crossovers, and Lexus obliges with its all-new NX. The NX features more dramatic styling from the Japanese brand, with the spindle grille gracing the nose. The new Lexus will have a new interface with touch pad, multi-information display with G-force sensor, and available sport seats. 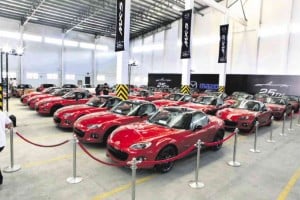 THE NEWEST addition to the family poses for posterity.

Mazda celebrates the 25th anniversary of its signature car, the MX-5 roadster with a special display. Mazda made sure to please its fans in the Philippines by getting an allocation of the MX-5 Miata 25th anniversary car. With only 1000 cars available worldwide, the Philippines was granted 25 units, all sold out quickly. The first 15 units have already been turned over the owners.

The next generation of MX-5 will feature the brand’s new Skyactiv fuel-efficiency technology and the new Kodo Soul of Motion styling. 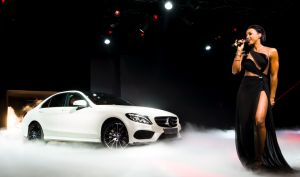 Mercedes will showcase the all-new version of its compact sedan. The new C-Class features new and striking dynamic design, aimed at a young, upwardly mobile market. The new C has a longer wheelbase, as well as wider and longer body to allow for more cabin space. Yet, it is 100kg lighter, thanks to higher aluminum content. The C has new technology including an intuitive information system, and birds-eye view camera system.

Mitsubishi updated its ASX compact crossover. Its main new feature is a panoramic glass roof that allows the cabin to be opened up to a view of the sky. LED lighting is embedded into the ceiling to enhance the ASX’s interior mood.

The Outlander Plug-in Hybrid Electric Vehicle (PHEV) is billed as the world’s first plug-in hybrid SUV. The Outlander PHEV can run on electric power alone for more than 48 km and over 96kph, making it ideal for city use. This also makes it very fuel efficient. Outlander PHEV uses a 2.0-liter gasoline engine with twin electric motors to operate a full-time four-wheel drive system.

Concept CA-MiEV, CA standing for Compact and Advanced, is an electric vehicle that has a reported 300km range using a lithium-ion battery and 80kW electric motor. With that range, Mitsubishi reckons that this is an suburban EV, good for several trips to and from the city.

Toyota’s futuristic Fun-Vii concept vehicle (not inspired by Tony Stark) is designed to connect wirelessly with infrastructure and surrounding roads. Users can project images onto the Fun-vii’s exterior display panels. The “Vii” is an abbreviation for Vehicle, interactive, internet. The concept car represents technology being studied by Toyota for use in a future production car.