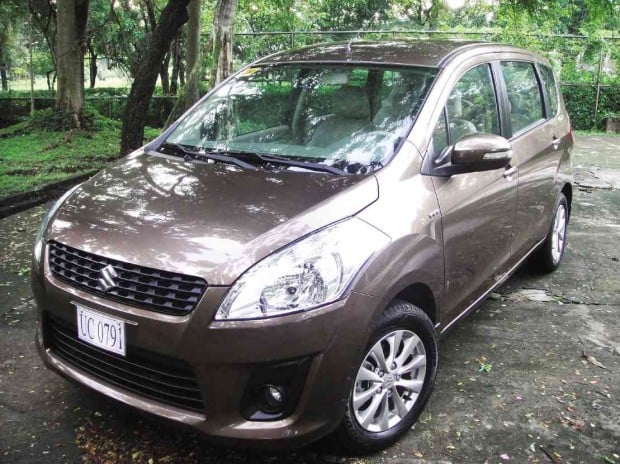 The Swift-based Ertiga will be displayed by Suzuki at PIMS. 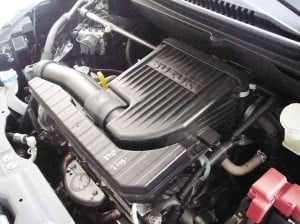 PIMS visitors will get to view up close the newest entry in the affordable compact MPV segment, the Suzuki Ertiga which was launched in Manila last July as a Life Utility Vehicle (LUV). The Ertiga, developed by Suzuki’s Japanese R&D team with inputs from Indian engineers, is manufactured in India by the Maruti-Suzuki joint venture. The seven-seater Ertiga is built on a stretched version of the Suzuki Swift’s platform and powered by the same K14B 1.4 liter, four-cylinder DOHC engine with 16 valves, variable valve timing, multipoint fuel distribution and 95 horsepower and 130 Newton-meters of torque max output. The transmission is either five-speed manual (GA variant) or four-speed automatic (GL and GLX.) A McPherson front suspension mated to a torsion beam rear axle underpins the Ertiga.

THE QUESTION. Since those are the same engine specs as the subcompact Swift five-door hatchback’s, the question naturally arises whether the Ertiga, having a wheelbase that is 310 millimeters longer and a height that is 155 mm taller, while sharing the same 1,480 mm track, retains the fun-to-drive characteristic of the popular Swift.

Surprisingly enough, the answer is yes. Unpretentious as it looks, the Ertiga is still a car designed and made by Suzuki Motor Corp., which has earned street cred for producing extremely driveable, small yet sporty motor cars and circuit race-winning motorcycles. Suzuki has advanced in innovative automotive technology and became a global brand over the years, after rolling out its first lightweight car in 1955. 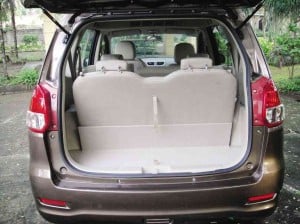 When the third row seatback is folded, carpeted cargo space increases from 113 to 460 liters and to 810 liters when the second row is also folded.

Being a Suzuki, the Ertiga loves to be revved and drives well, with some tweaked gear ratios and its monocoque construction allowing it to perform admirably even with seven on board. Maruti has geared the Ertiga a little short to make the best of the small engine’s torque and while this helps the mid-range performance, it has to rev high up to 4000 revolutions per minute to maintain highway momentum. This affects fuel efficiency (averaging 7.9 liters per 100 kilometers) and the engine becomes noisier than usual. Otherwise, the 95 HP and 130 Nm torque provide good, fairly quiet driveability in the city with decent straight-line stability.

EAGER. Driving the Ertiga GLX, I was surprised by its eager acceleration. Although by no means sports car-quick, it is still unusual for a compact 95-HP people carrier and is accompanied by a pleasing exhaust growl. Moreover, I found ample legroom and headroom inside, even when I tried out the second row seats. The driver’s seat is an inch higher than the front seat, giving the driver good frontal visibility and a commanding view of the road. The seats are thinly padded to free up as much space as possible and the transversely mounted engine also helps carve out more interior room. While the third row seat is wide, legroom is skimpy in the back, making the last seat suitable only for children. 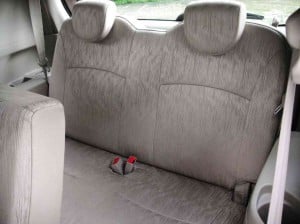 The third row seat is wide but offers little knee and leg room.

The large doors open wide, making ingress and egress easy. Although the Ertiga is an MPV, you don’t have to climb aboard, you can just step in since its ground clearance is not too high. The second row of aircon vents, mounted on the ceiling just ahead of the second row of seats, cools the cabin quickly. These are important features for a family, especially one with relatives who are senior citizens.

The second row seat splits 60/40 and has a fold-down armrest. When all three rows of seats are in place, luggage capacity is only 113 liters. But when the third row seatback is folded, carpeted cargo space increases to 460 liters, then to 810 liters when both the second and third row seatbacks are folded. Thus you can convert the Ertiga from a seven-seater to a panel van in just a few seconds. However, I found it difficult to tumble the second row seat as the lowering lever was either stuck or too hard to push down.

SPACE AND LIGHT. The interior has a beige color scheme that exudes an elegant ambience but would require seat covers to keep things neat and spotless. The large windows all around give a sense of space and light inside. The dark brown dashboard’s layout resembles that of the Swift and contains a tachometer, info display integrated into the meter cluster (digital clock, trip meter, odometer, speedo), fuel consumption gauge, light off and key off reminder alarms and driver’s seatbelt reminder lamp. The audio system has steering wheel-mounted controls, four speakers and AM, FM, CD, MP3 and USB in the GLX variant. Power windows, power door locks and power side mirrors (big enough to help rear visibility) complete the picture. 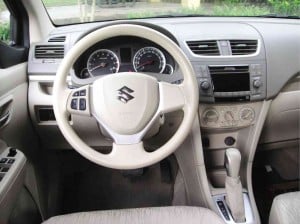 Everything on the dashboard is within easy viewing and reach. PHOTOS BY AIDA SEVILLA-MENDOZA

Outside, the Ertiga’s large headlamps, rhombus-shaped fog light enclosures and front bumper instantly remind you of the Swift, The rear end has a big gate and high-mounted taillights. Creases on the sides enhance the flowing aerodynamic lines of the body. The build quality is quite solid and the Ertiga feels well-assembled enough to be used not only as a family MPV but also as a taxi or shuttle. Safety features include dual front airbags, anti-lock brake system, side impact beams, defogger and remote control entry system in the GLX.

Summing up, the simple, unpretentious Ertiga offers value for money, thanks to its uncomplicated practicality and spaciousness. These are the things to like about the 2014 Suzuki Ertiga: its sporty acceleration, roomy cabin, expandable luggage space, comfy ride, rear air conditioning and sturdy construction. Not to mention the competitive retail price of P812,000 for the top-of-the-line GLX. But if Suzuki really wants to outsell the competition, they should bring over the diesel version of the Ertiga.