Toyota Classics plays the movies on November 6 at the CCP 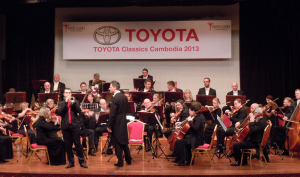 Toyota Classics will be performing November 6 at the Cultural Center of the Philippines. Since 1990, Toyota has promoted classical music to support charities across Asia, hosting 175 concerts through the years. This year Toyota is proud to present the Covent Garden Soloists Orchestra from London’s world renowned Royal Opera House. The beneficiary for the Philippines is Metrobank Foundation.

Toyota Classics marks its grand 25th edition with a feast of music that blends classical orchestra with the glamor of the silver screen, exploring new frontiers of classical music.

A Covent Garden Soloists concert is an ‘event’, where all the artistic senses are stimulated by a feast of music which usually extends beyond the aural. In every program, Drama, Fashion and even Technology are also variously employed to create a sense of adventure, allowing audience and performers to explore new frontiers where tradition mixes with invention.

The Covent Garden Soloists was founded and is directed by the Creative Producer of the Royal Opera House, Vasko Vassilev. The predecessor of the Covent Garden Soloists is the Soloists of the Royal Opera House, which was also founded by Vasko in 1994 as an elitist selection of the ‘crème de la crème’ of the Orchestra. As the Soloists’ first artistic director, he presented several innovative performance projects to much acclaim. His objectives were to inspire the most talented Orchestra principals and the Soloists of the Ballet and Opera to extend themselves beyond the House’ core ‘large group’ repertoire.

Tickets are available at Ticket World. Visit www.toyota.com.ph for details.