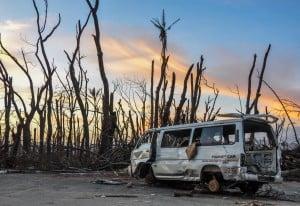 Devastation of Typhoon Yolanda in 2013. Photo by Sam Liuson

TACLOBAN CITY, Philippines—Some 24,000 candles will light up a 24-kilometer stretch of roads on Saturday, not only to recall the devastation and deaths caused by the strongest typhoon to hit landfall but also to show gratitude for the international community’s outpouring of assistance.

“This is a tribute to humanity’s finest hour,” said Jeff Manibay, organizer of the Yolanda Candlelight Memorial ceremony.

He was referring to the swift outpouring of support and assistance from international and national organizations to Tacloban, considered the Ground Zero of Super Typhoon “Yolanda” (international name: Haiyan), rampaged across the Visayas on Nov. 8, 2013.

The first anniversary of Yolanda will be marked in many areas with prayers, flowers and songs. Others will hold protest rallies to call to task the government for alleged delayed and inadequate assistance.

In the city, survivors will light 24,000 candles from Daniel Z. Romualdez Airport in San Jose District, the hardest-hit area, to Nula-Tula District, site of a memorial park where 2,273 of the 6,300 Yolanda killed were buried.

“This candlelight memorial is not only meant to remember our loved ones who were killed during the typhoon but also to use it as an opportunity to say thank you for all those who helped us,” said Maniba, who lost his father Felipe, 70, and mother Venicia, 74, in the tragedy.

The candles were distributed earlier this week. Each will be placed in a small glass and will be set a meter apart. These will be lighted at exactly 6:30 p.m., an hour after the Mass at the Plaza Rizal. The ringing of the church bells will signal the start of the hourlong ceremony.

Manibay said he expected more than 50,000 people including those still living in tents and bunkhouses to line the streets for the event.

About 20,000 typhoon survivors also are expected to march in the streets of Tacloban on Saturday morning to decry the government’s alleged failure in giving assistance, especially housing and livelihood.

The protesters will call for the resignation of President Aquino. “He is callous to our plight. We have done our part to talk with him and inform him of our demands. But he never listened to us. We are supposed to be his bosses and yet what did we get from him? Nothing,” said Efleda Bautista, chair of People Surge. -With report by Joey A. Gabieta, Nestor P. Burgos Jr.