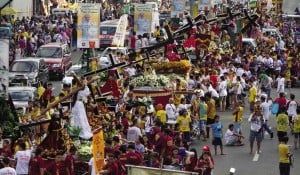 REPLICAS of the Black Nazarene are paraded in the streets of Manila on Wednesday as a prelude to tomorrow’s “traslacion,” a mammoth procession rooted in the 17th century. Alexis Corpuz

Metro Manila Development Authority Chairman Francis Tolentino has asked the public to respect the agency’s traffic constables, yet he plans to subject them to the bizarre measure of wearing diapers while on duty–and announcing the measure, to boot.

MMDA chair Francis Tolentino on Wednesday said the 2,000 traffic constables to be deployed for the procession for the feast of the Black Nazarene in Quiapo, Manila, on Friday would be provided with adult diapers so that they won’t have to leave their posts in case they really need to go. It’s a precautionary measure never before considered in any traffic management operation.

The Black Nazarene procession is one of the country’s biggest religious gatherings seems to get more challenging each year for authorities.

“Because if you leave your spot and join the queue to the portalets, it might take you more than hour to get back,” Tolentino explained to reporters. “That’s why they really have to wear something.”

He said diapers would also be handed out when the MMDA mobilizes personnel for the visit of Pope Francis next week.

But some traffic marshals approached by the Inquirer were embarrassed by the mere mention of Tolentino’s idea. “I don’t mind the tough assignment. But being asked to wear diapers? I don’t know. I would rather wait in line,” said one constable.

Another enforcer said he wouldn’t feel comfortable at all —especially now that Tolentino had announced it and all eyes would be on the MMDA constables on the day of the procession. With a report from Tina Santos, Annelle Tayao-Juego and Jocelyn R. Uy, Kristine Felisse Mangunay