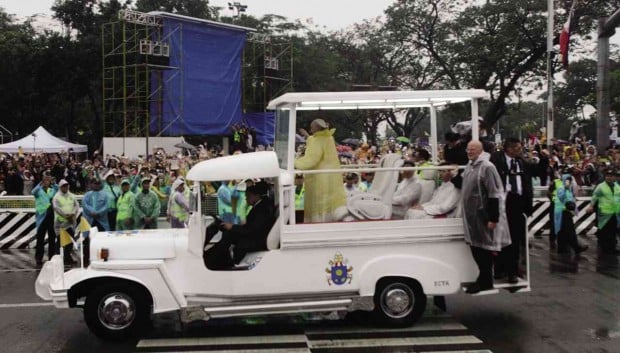 MANILA, Philippines–Pope Francis’ visit to the Philippines was one of firsts and superlatives: the most attendees for a papal Mass, the first papal Mass to be held during a storm, and not one, but four popemobiles.

Motioncars.Inquirer.net was the first to get details on the “official” popemobile, modelled on the Philippines’ popular public transport vehicle, the jeepney.

Built on a brand-new jeepney chassis, the vehicle was specially designed for Pope Francis. His requirements were different from previous popes—no armored bodywork and glass to favor open sides.

The all-white popemobile allowed the Pontiff to be visible to and in touch with his followers. Indeed, standing in the elevated rear cabin in a yellow rain poncho over his vestments, he stopped the convoy from the Quirino Grandstand several times to reach out to the crowd, particularly babies. 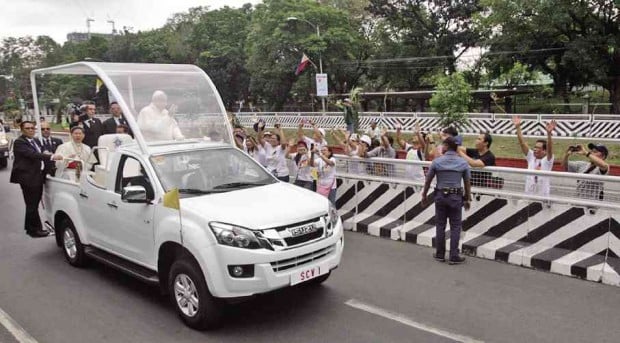 A converted Isuzu D-Max pickup was used by the pope for the first leg of his visit.

The unique design of the popemobile used for the culminating activity of the Pope’s visit was recognized by the world’s press. The jeepney was a symbol of the Filipino’s ingenuity, having originated from surplus US military jeeps left by American forces after World War II. They are robust and meant to last for decades.

However, the jeepney also came to symbolize the nation’s stagnant and inadequate transportation system. They are noisy and uncomfortable, if you’re not using one with a single papal seat. They are heavy polluters, usually trailing a long plume of smoke from their diesel engines.

The builder of the jeepney popemobile, Edison Cham of ECTK Armoring, recounts his experience: “Upon learning that the Holy Father would be coming, I immediately contacted our friends in the Catholic Church and volunteered to design and build the popemobile. Cardinal Tagle wrote me a letter agreeing to our proposal last year.” 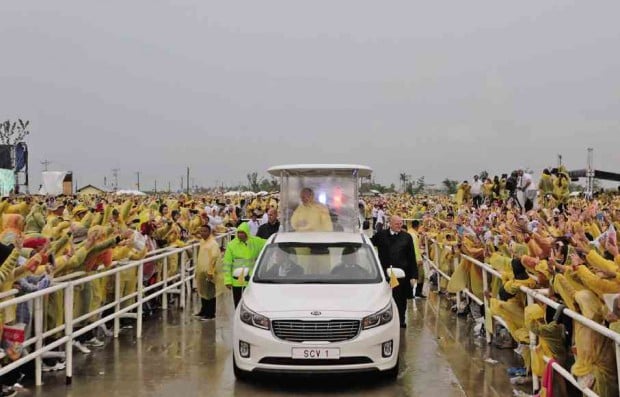 A Kia utility vehicle converted for the pope was used in Tacloban, Leyte.

It certainly helped that Cham had prior experience with papal vehicles. His company also built the armored vehicle that Pope John Paul II used during his 1995 visit.

This time, the conversion was done on a brand-new jeepney, taking four months to build. The jeepney featured the pope’s seal on the hood and sides. Renowned artist Ramon Orlina crafted two glass sculptures to adorn the sides of the jeepney. These were not seen in the motorcade. “The crosses were returned to Mr. Orlina,” Cham explained.

For the first leg of the papal visit, another popemobile was used, a converted Isuzu D-Max pickup. This more modern take on the papal vehicle was built by Gencars, an Isuzu dealer, and body builder Almazora Motors.

Bishop Ruperto Santos, the official in charge of the pope’s transportation for the Philippine visit, had earlier said that three popemobiles will be used. 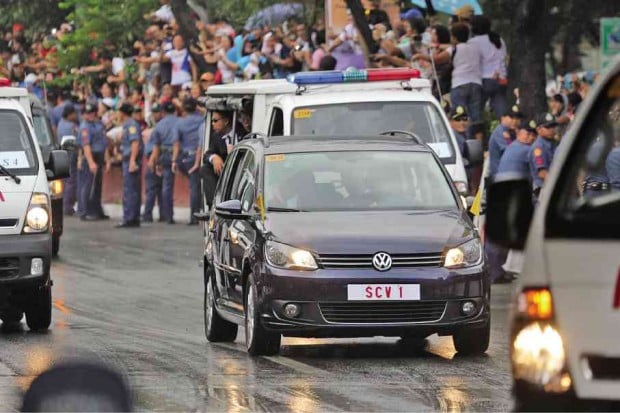 The VW Touran allowed for easier ingress and egress for the pope.

The third vehicle was rolled out in Tacloban, during the Pope’s stormy visit to the coastal city. This one was a Kia utility vehicle converted for papal use. It was originally used during the Asian Youth Day in South Korea in 2014, an event meant to bring together Catholic young people from all over Asia for fellowship and spiritual growth.

If the jeepney is the uniquely Filipino vehicle and the Isuzu the more modern model, the Kia looks like the more stately ride.

Then there’s the “normal” car used by Pope Francis, the Volkswagen Touran. VW Philippines provided a pair of Tourans.

In keeping with Pope Francis’ request for the simplest, cheapest model, VW initially offered the Polo, but later changed it to the Touran to allow for easier ingress and egress of the pope.

VW Philippines’ John Philip Orbeta said that one of the Tourans will be donated to a church beneficiary to be designated by the pope.

The pope used a Volkswagen for his very first outing as pontiff. This was a Phaeton luxury sedan used by the Vatican, albeit the more mundate 3-liter V6 diesel model.

A 12-cylinder Phaeton was given to and used by his predecessor, Benedict XVI. This was before Pope Francis selected a more humble previous-model Ford Focus for his daily ride.

That the Pope has ridden and reportedly enjoyed the Philippine jeepney makes the builders feel proud.

“We would be happy to share the blessing with all Filipinos and even the world. Maybe we can have it displayed in our parishes first. Our Holy Father Pope Francis is the perfect example of humility and simplicity.

“That is why I believed that the jeepney is the best design for the popemobile. We also took this chance as our humble way to share our Filipino culture and national ingenuity to the world,” Cham said.