Papa-mobile brands start 2015 on a high 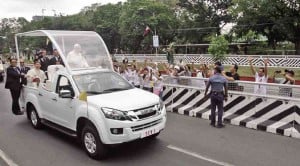 A converted Isuzu D-Max pickup was used by the pope for the first leg of his visit.

MANILA, Philippines–The beginning of 2015 started on a divine high for a trio of car brands. Japanese brand Isuzu first took the limelight when its converted D-Max pickup became his Holiness Pope Francis’ humble carriage as it transported the Pope from his arrival at Villamor Airbase to the Papal Nunciature in Manila. The customized pickup was built by Isuzu dealer Gencars, its body built by Almazora Motors.

On the Pope’s second day, it was the turn of the “People’s Car” to bring the “People’s Pope” from his temporary residence in Manila to his various itineraries in Manila. This time, it was Volkswagen Touran. Volkswagen Philippines provided two Touran MPV units, one of which was intended by VW to be donated to a church that the Pope would identify.

On his third day, on his visit to Typhoon “Yolanda” victims in Tacloban City, the Pope was transported in a Kia utility vehicle.

Except in the unmodified Touran, Pope Francis chose to stand all the time while riding the D-Max and Kia.

The millions of Catholic faithful were still on a high from that papal visit, when controversy hounded one of the country’s most enduring auto brands. Mitsubishi Philippines got dragged into the public furor surrounding President Noynoy Aquino’s nonattendance of a solemn, serious affair—that of the arrival of the remains of the 44 Philippine National Police-Special Action Force troopers slain at Mamasapano, Maguindanao on Jan. 25. Public emotions were already rising shortly after the news broke out about the massacre, but when media reported that the Commander in Chief was nowhere to be found in Villamor Air Base to give arrival honors for the slain troopers on Jan. 30, and instead attended a prescheduled Mitsubishi plant opening in Sta. Rosa, Laguna, social media comments were seething, condemning not only the President but the auto manufacturer, as well.

Though Mitsubishi Motors Corp. (MMC) has remained mum on this, many observers went to the automaker’s defense, saying that Mitsubishi executives would have understood if the President decided to delay, or even forego, his visit to the newly inaugurated plant in order to attend to more urgent matters. Mitsubishi, which has been in the Philippines for more than 50 years, has reinforced its commitments to the country through this new manufacturing plant, located in a 21-hectare facility in Greenfield Automotive Park in Sta. Rosa, Laguna. The acquisition and transfer to Sta. Rosa, Laguna, is part of MMC’s “New Stage 2016” midterm plan of reinforcing business in the Philippines as a core market following Thailand and Indonesia, which is also in preparation for MMC’s further business development in Asean countries.

Schadewald also said that Touareg special model, Polo Hatchback, the Tiguan R Line and several new engines and transmissions will be introduced this year. “The year 2015 will close with the launch of the new Passat B8, which closes the gap to the high-end executive limousines,” he added.

Auto giant Toyota Motor Philippines was not to be outdone, as it introduced the new Prius C, an all-new Alphard and Toyota Insure at the Manila Peninsula in Makati Jan. 30.

Luxury van Alphard showed a noticeably new look, enhanced NVH (noise, vibration and harshness), an extended wheelbase, lowered floor height for easy ingress and egress, new interior seat functionality (rear seat access step is 50 millimeters lower than the previous generation), its rear door opening has been widened by 70 mm, a larger cargo space (147-liter capacity for the area under the luggage room floor). This combines a third-row seat slide mechanism and a recessed storage space which it claims is a world-first.

From luxurious to sustainable driving, Toyota also introduced its low-carbon footprint subcompact hybrid vehicle Prius C, this time with a fresher, younger look. New styling is evident in its front bumper and interior color trims. a new navigation feature is offered in its in-car entertainment system. It now has Vehicle Stability Control and Traction Control features with cut-off switches. These traits ensure that it will prevent the car’s wheels from slipping sideways when cornering and hinder wheel slip when acceleration on slippery surfaces respectively. The new Prius c also now sports an Emergency Brake Signal that will trigger the LED rear brake lamps to rapidly flash if the brakes are suddenly applied in excessive speeds. The Prius C is equipped with the same Hybrid Synergy Drive technology, and powered by a 1.5-liter, four-cylinder 1NZ-FXE VVT-i Atkinson cycle engine that complies with standard regulations of Euro V emissions. The Prius has been named among the 50 cars that changed the world.

After the successful launch of the third-generation Nissan X-Trail during the Philippine International Motor Show September 2014, Nissan Philippines Inc. (NPI) was at it again with the launch of the All-New Nissan NP300 Navara Feb. 2 at Sofitel Philippine Plaza Manila. NPI boasts that it is backed by Nissan’s 80-year legacy in pick-up truck experience and leadership, and that it is excited to provide the Philippine market with the much-anticipated truck. It claimed that the 12th generation Navara is now packaged with a tougher body and smarter features.

Antonio Zara, NPI president and managing director, during his speech at the Sofitel Philippine Plaza Manila, said he was confident that the all-new NP300 Navara will be a key player that will challenge the segment (See separate story on this page).