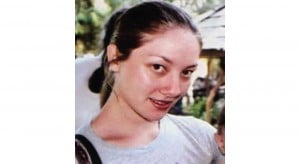 MANILA, Philippines—Her “flight” and refusal to face investigators got her deeper into trouble.

The Department of Justice (DOJ) has found probable cause to indict the wife of slain race car driver Ferdinand “Enzo” Pastor for allegedly masterminding his ambush in Quezon City last year in conspiracy with her reported lover.

Dalia may have already gone abroad, according to a ranking official of the Quezon City Police District (QCPD). Pastor’s mother Remy, meanwhile, urged her to finally surface and “face the court for the sake of my son and their two children.”

The 32-year-old Pastor, then driving a truck carrying his race car on his way to Clark, Pampanga province, was shot dead by a motorcycle-riding gunman on the night of June 12, 2014, at the intersection of Congressional and Visayas Avenues. The attack also wounded his aide, Paolo Salazar.

Villanueva gave weight to the August 2014 extrajudicial confession of the alleged hired killer, Edgar Angel, then a Pasay City policeman, despite his recantation a month after issuing damning statements against Dalia and De Guzman.

No direct evidence but…

“While it may be true that there is no direct evidence pointing to both respondents as direct participants, there is interlocking circumstantial evidence that would point to their complicity in the commission of the crime,” the DOJ official said in her resolution dated Feb. 13. “All the foregoing circumstances, to our mind, lead to reasonable inference of respondents Sandy and Dalia’s probable participation in the crimes of murder and parricide, respectively.”

Angel is detained on murder charges at the Quezon City jail, his case being heard in the QC Regional Trial Court Branch 85.

De Guzman, who was earlier indicted for illegal possession of firearms in connection with the ambush, has been out on bail since Sept. 2, 2014.

“Not once did respondent Dalia appear during the preliminary investigation to controvert the allegations in the complaints, despite the numerous opportunities given to her. Such unexplained absence can be taken against her in the determination of probable cause, since flight is indicative of guilt,’’ Villanueva said.

The prosecutor also maintained that “recantations do not necessarily cancel an earlier declaration,” referring to Angel’s turnaround. The policeman had claimed that he was just tortured by the Quezon City police into implicating Dalia and De Guzman.

Before he recanted, Angel said Dalia supplied him “information on the exact location” of her husband on the day of the ambush while De Guzman “provided the means for the execution of the plan.”

In several meetings that began in November 2013, De Guzman allegedly told Angel that he was looking for a gunman-for-hire because “he wanted somebody killed for beating up a woman.”

Offering a P100,000 fee, De Guzman allegedly ordered Angel to also kill Pastor’s father Tomas if he happened to be with the race car driver.

Villanueva took note that Dalia was with Pastor’s parents and had information on her husband’s whereabouts at the time of the attack. She also considered the affidavit executed by Pastor’s househelp Chona Domen, who spoke of “an illicit relationship between Dalia and Sandy.”

This, along with Angel’s statements, established motive. “For purposes of establishing conspiracy, and absent any evidence, motive plays an important role. This is strengthened by PO2 Angel’s statement that the reason why he was contracted to kill Enzo was because the latter constantly beats his wife and that respondent Sandy wants to relieve her of this burden,” Villanueva said.

De Guzman was arrested on Aug. 26, 2014, in a trap set by the Quezon City police that had him handing Angel his supposed payment for the kill.

Based on disowned affidavit

Reached for comment, Dalia’s lawyer Ruy Rondain said he was “disappointed” that the DOJ still found merit in Angel’s recanted statement and that his client would soon file a motion for reconsideration. Circumstantial evidence is “not enough” to find probable cause, he said.

Saying he had no idea of Dalia’s whereabouts, the lawyer argued that “flight as evidence of guilt applies when a perpetrator flees the scene of the crime.” Dalia, he stressed, had actually “cooperated” with the National Bureau of Investigation.

In the same resolution, Villanueva dismissed for “insufficiency of evidence” the frustrated murder charges against Dalia and De Guzman in connection with the wounded Salazar.

Meanwhile, the head of the QCPD-Criminal Investigation and Detection Unit said that based on its monitoring, Dalia may already be out of the country.

Chief Insp. Rodelio Marcelo cited reports in September last year indicating that Dalia took a chartered plane from Luzon to Tawi-Tawi, then a speedboat from Tawi-Tawi to Kota Kinabalu, Malaysia.

Marcelo clarified that no arrest warrant had been issued against Dalia. De Guzman, on the other hand, had been attending his hearings at the DOJ, with his known address still at BF Homes, Parañaque City, he said. –Tarra Quismundo with a report from Jaymee T. Gamil