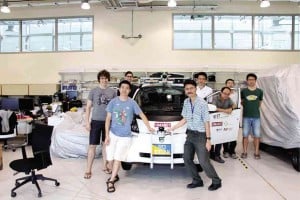 SINGAPORE—A Filipino professor in Singapore has converted an ordinary car and two buggies into driverless vehicles, and is now working on an autonomous car system that may soon be part of the city-state’s public transportation system.

Marcelo Ang Jr., 56, oversees a 12-member group of students and staff members called Autonomous Vehicles Group (AVG). They developed two driverless golf buggies and an autonomous compact car that are “environment-friendly” and “cheaper” than other versions of their kind.

Ang, an associate professor of National University of Singapore’s (NUS) Department of Mechanical Engineering, said the vehicles would enable the old, handicapped and intoxicated people to “drive” safely to their destinations.

“My motivation in starting this project is my wanting to become independent when it comes to driving,” said Ang, also the Director of NUS’ Advanced Robotics Center. “As I grow older, I feel it’s very important to be independent and mobile, to go to the library and shop without having to rely on my kids.”

The vehicles were developed in cooperation between NUS and Massachusetts Institute of Technology (MIT), through the Singapore-MIT Alliance for Research and Technology (SMART).

Ang supervises the group, together with Emilio Frazzoli, his counterpart at MIT.

NUS-SMART’s version may be similar to Google’s Self-Driving Car that has $150,000 worth of equipment. But the former is “cheaper,” with the conversion costing only around $30,000. The Singaporean vehicle can also navigate indoors, underground, and even in areas with no Global Positioning System (GPS) signal, said James Fu Guo Ming, SMART project lead.

This program is “proof that you don’t have to be a $300-billion giant company like Google to work on an autonomous vehicle,” said Fu, who is also a former student of Ang. “The work here is being done mostly by students with the help of research staff.”

Ang’s team is not only focusing on converting vehicles, but is also developing the Mobility-on-Demand (MOD) system.

Users will be able to use their smartphones to book autonomous vehicles, which will take them to the nearest train station where they can ride toward their final destinations.

Ang said MOD was created to “supplement Singapore’s public transportation system” and solve the so-called “first-mile” or “last-mile” problem, where passengers have difficulty traveling from their starting location to transportation networks, such as bus, train and ferry stations, and vice versa.

“In Singapore, this is much needed because trains are very efficient, while buses are not,” Ang said.  “After I arrived to my destination, the car will go to the next person who needs it. If you have this system, would you want to still own a car for everyday commute?”

The project is funded by the Singapore National Research Foundation through SMART at the Campus for Research Excellence and Technological Enterprise (CREATE). It is part of the country’s Smart Nation initiative, launched by Prime Minister Lee Hsien Loong in 2014.

Ang had several other programs on robotics since he started working at NUS in 1989, including the Ship Welding Robotic System. But he said the MOD system is one of his most important projects.

“If implemented, the system will be one of my greatest legacies,” Ang said. “The transportation system affects all sectors of society, including the rich and the poor, and it will have a great impact to everybody.”

The father of three boys has been into robotics since he was young. He remembered tinkering with broken things at home in Manila, including toasters, ovens, fans, door locks and even their car, and finding ways to fix them.

City of the future

Ang was teaching at University of Rochester when he was offered to be a professor at NUS. At that time, Ang said, Singapore was “not as developed as it is today.”

“Ambassador HE Professor Tommy Koh said Singapore aims to be the city of the future, and he asked me to join NUS so I can become part of it,” Ang said.

Ang immediately packed his bags for Singapore and, in three months, brought his family to settle in the country.

NUS and the Singaporean government made true their promise to support Ang’s projects. When the National Research Foundation offered a grant in 2010 for programs on future urban mobility, Ang pitched the concept of the “robot car” and of converting cars into autonomous vehicles to Damien Chong and Qin Baoxing, his students at the time who just recently earned their PhD and are now part of AVG.

The team was able to launch two driverless golf buggies—DJ (Driverless Jockey) and BX (Buggy Xtreme), named after Chong and Baoxing—which ferried passengers at a speed of 10 kilometers per hour around the Chinese and Japanese Gardens in October last year. The AVG also launched Singapore’s first locally developed driverless car called SCOT, which is designed for operations on public roads.

Unlike other driverless cars which are retrofitted with expensive 3D laser sensors, SCOT relies on low-cost off-the-shelf Lidar sensors, which enable the car to drive even in tunnels and places where GPS signals would be hindered, according to a statement from SMART.

Fu said the autonomous vehicles would provide a safer mode of transportation, more productivity, better use of road infrastructure, and transportation access even to those who cannot drive.

“Accidents are due to human error, as some people are texting, calling or even watching movies while they are driving. If the cars are driving by themselves in a very predictable manner, it would be safer,” Fu said. “At the same time, while you are inside the car, you can be doing other things like checking your e-mail and Facebook, and watching YouTube, all in safety as the car drives for you.”

Ang said the Singaporean government is supporting the prototyping stage for the MOD system, including the development of the autonomous vehicles. The group is also planning to take the car to the “One North” area, a place designated for field trials of autonomous vehicles and where many pedestrians and vehicles are present. The trial will probably start next month, he added.

But Ang wants one more thing—to see this technology in his own country, the Philippines.

“Definitely, I want to see these autonomous vehicles in the Philippines, where there is a lot of urban development and traffic, and the population is very huge,” Ang said. “It would be nice if we have autonomous vehicles and a shared-car system-mobility on demand. This may be a solution to our traffic problems and will definitely make people more productive.” -Gervie Kay S. Estella