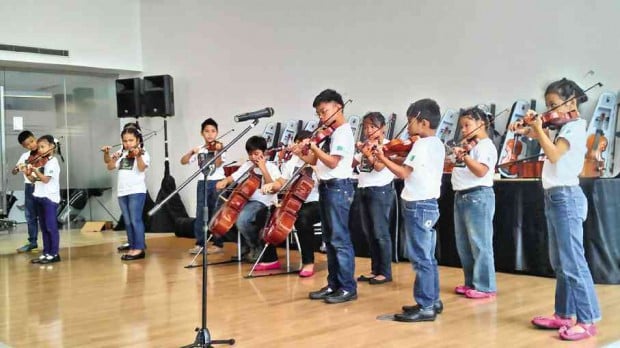 Musically gifted students of Centex-Tondo perform to an appreciative audience of benefactors.

Wolfsburg may be the seat of German automotive engineering, but the heart and soul of the iconic company originating from this city belongs to every place the auto manufacturing company calls home. Volkswagen has, over the decades, achieved legendary status not just for its cars, but for its corporate culture that puts arts and culture alongside its global image.

In 2011, for instance, the Volkswagen Group of America formed a multifaceted, multiyear partnership with the Museum of Modern Art (MoMA) and MoMA PS1, providing the framework for the development of new and inspiring experiences as part of Volkswagen’s international commitment towards the support of arts and cultural institutions.

This partnership led to a series of exhibitions, concerts and educational activities, including the display of works from influential modern artists such as Francis Alÿs, Sigmar Polke and Christoph Schlingensief.

In 2012, it also made possible the installation of the VW Dome, which now provides an additional performance and experiential art space in the courtyard of MoMA PS1 in Long Island City, Queens, annually from September to May. 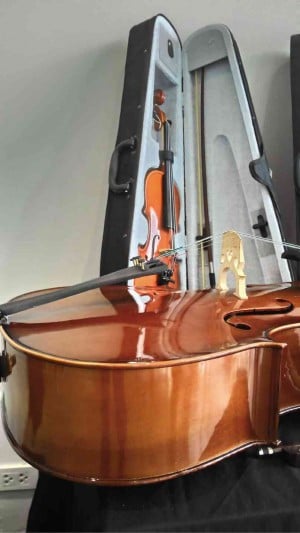 Part of the donation of 21 violins and two cellos for the students of Centex-Tondo photos by Tessa R. Salazar

In 2013, the partnership launched Expo 1: New York, an extensive exhibition project that combined works from international artists focusing on present economic and ecological challenges. In addition to sponsorships for exhibitions and educational activities, the Volkswagen Group of America also donated the VW Dome 2, built in the New York district of Rockaway Beach to serve as a cultural and communal center in the aftermath of the devastation caused by Hurricane Sandy.

In the Philippines, Volkswagen trains its eyes on children with a two-pronged approach to their development: via pedestrian safety, and through the enhancement of musical skills.

In the first approach, Volkswagen Philippines launched its child safety initiative (CSI) campaign during the Manila International Auto Show this April. In the second approach, on May 12 at the Volkswagen dealership in Bonifacio Global City, it donated 21 violins and two cellos to the pupils of the Center of Excellence in Public Elementary Education (Centex)-Tondo, Manila. The donation was made possible through the efforts of Ayala Foundation Inc.

Aside from the musical instruments, spare strings and rosins were handed out to the scholars of Centex-Tondo. After the ceremonial handover, the children performed seven compositions to an appreciative audience composed of Volkswagen Philippines and Ayala Foundation officers, Centex teachers and parents of the students, and members of the motoring media. Volkswagen, consistent with its global drive for automotive and community excellence, once again demonstrated that, on the road to economic progress, the arts and culture must come along for the ride.

Centex is a project of Ayala Foundation Inc. in partnership with the Department of Education. It aims to provide bright but economically disadvantaged children with primary education comparable to that of the best schools in the country. There are two Centex schools: one in Tondo, Manila, and the other in Bauan, Batangas.

The ceremony was also attended by Ayala Foundation president Ruel Maranan and senior director for programs Rowena Lopez. Ayala Foundation, the social development arm of Ayala Corp., has four key program areas: youth leadership, sustainable livelihood, arts and culture, and education. Education is where Centex plays a crucial role. For this reason, Volkswagen Philippines has chosen this special project as its second CSR activity for the year. 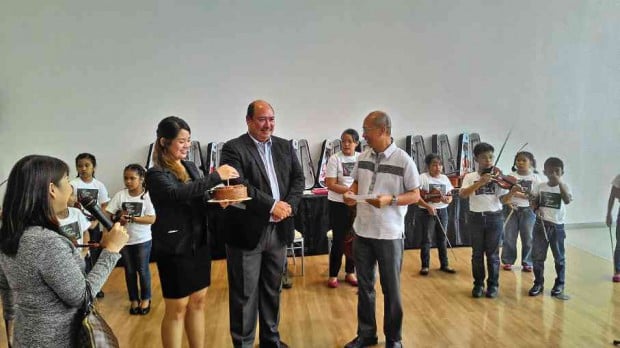 “For us, the job is never done when it comes to the advancement of children’s welfare. As they say, a journey of a thousand miles begins with a single step. With the CSI, our small steps to heighten awareness on road safety could just be the answer to the perennial problem of road accidents and traffic discipline; and with this humble gesture of providing the students of Centex with their own violins and cellos, we just might be listening to the next Niccolò Paganini or Pablo Casals,” said Orbeta.