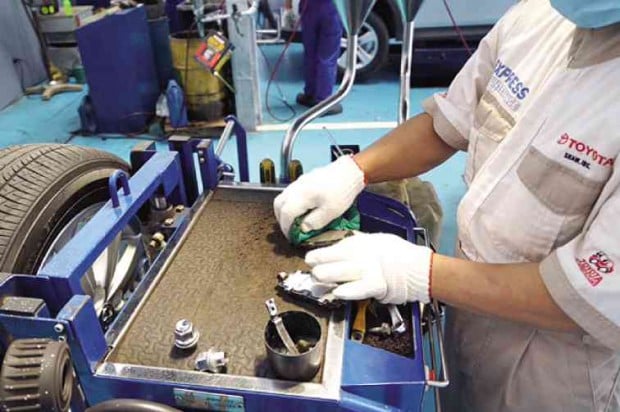 One of the biggest conveniences I now enjoy after moving to Mandaluyong three years ago is living within short distance of Toyota Shaw.

I’d drive the kilometer or so from my modest townhouse to Toyota Shaw, drop off the car, walk home, and then freshen up to head to the office. It also gave me a genuine chance to get some exercise, as typical car guys are a lazy lot.

I’ve been very happy with the service Toyota Shaw has given me. I have never, ever introduced myself as a member of the motoring media for VIP service, freebies or a discount. Even if the daughter of Toyota Shaw chair Severino Lim is a good friend since college, I never bugged her for a discount. I was simply happy to go there, expect top-notch quality and honest service, and pay the requisite fee.

It was somewhat of a home. My Yaris had some of its heavy servicing done there despite being out of the warranty period. My new Toyota FJ Cruiser and my brother’s Toyota Fortuner are also being serviced in Toyota Shaw.

I had formed a good working relationship with my service advisor, Jerry Yape, who always helps me find the cheapest and most cost-effective way to service my vehicles whenever major components are in need of replacement.

He also always tries to finish servicing my cars as quickly as possible, even if I am in no rush.

Indeed, the Toyota way is strong here, with huge emphasis on fast quality service with zero wastage, be it time, materials or movement.

This is perhaps why Toyota Shaw and its sibling Toyota Pasig have always scored very high in overall customer satisfaction.

We also shoot regularly in Toyota Pasig for our Wrong Car/Right Car series in Top Gear, and we have made many friends there as well.

So imagine my pleasant surprise when I received a call from someone from  Toyota Motors Philippines (TMP), who kindly asked me if I wanted to have any of my Toyota vehicles serviced for free, as per the scheduled preventive maintenance service interval. 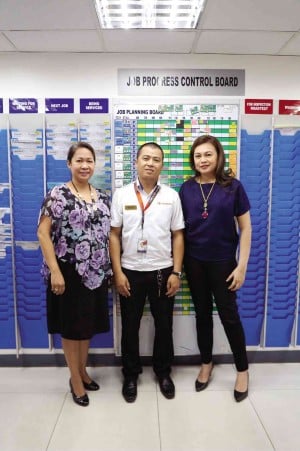 In my Yaris’ case, it was a simple change oil and filter job. I was, of course, happy and said yes.  But had a few other things in mind that I wanted done, which I would later add on.

Walking into the Toyota Shaw service department reception, it honestly felt weird. A cute and cheerful Toyota Shaw partner (which is what Toyota personnel are called) greeted me with a smile and a very welcomed cold towel, just like in posh golf and country clubs.

All those in  Toyota uniforms knew me by name, and they would greet me. Drinks and snacks were offered to everyone in the service area, reception and showroom floors.

Toyota is now promoting its Express Maintenance Service program. It is actually an  internal program Toyota has been offering for almost a decade, but with the ever-growing sales in the automotive industry, Toyota realized that while adding more service space and more dealerships would be the ideal long-term solution, segregating quick, basic service from the more time-consuming major one would be a quick and effective short-to-medium-term solution.

Segregating quick servicing has been beneficial to Toyota’s Express Maintenance program. Including interior and exterior cleaning, a car can be quickly and thoroughly serviced in around 60 minutes.

Teams of three personnel, along with your service advisor, would examine the car thoroughly. After you arrive at the service bay, the car is checked for exterior and interior damage, then all electrical components are reviewed (lighting, air-conditioning system, audio).

Afterward, your car is placed on a lifter, and the team of three mechanics remove all four wheels and check the tire tread depth, condition and wear. 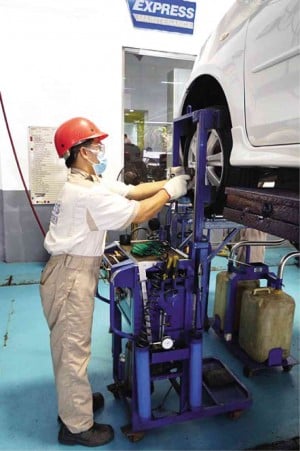 Removing the tires to check on their condition

They then open up the car; inspect and clean the brakes (or request for parts changes, as needed); check for leaks, the condition of the suspension, and all the fluids; and finally drain the old oil and replace the oil filter.

The mechanics also ensure everything is nice and tight underneath. My still serviceable engine air filter is also given a thorough cleaning.

It actually took only about 25 minutes, although the queue at the wash-bay was a bit longer.

All throughout the mechanical servicing and inspection, I was present and checking with interest on how the expertly trained Toyota mechanics serviced my car. To make sure I wouldn’t get overzealous, personnel from the TMP head office led by Tiffany Fernandez and Cher del Norte supervised me like a child in a candy store. 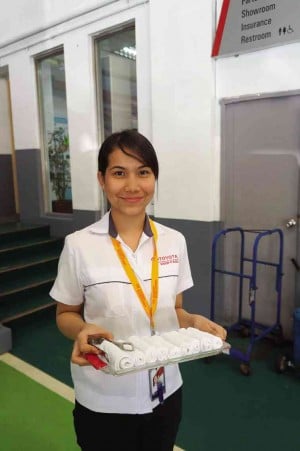 A welcoming cold towel courtesy of a Toyota Shaw partner

With the inclusion of Express Service bays, a typical Toyota dealership can increase customer turnover by as much as five more cars per service bay per day, with most service bays averaging around seven cars per day. That’s an around  70-percent increase in vehicles serviced per bay.

Currently, most Toyota dealerships allocate five express service bays from their 30-50 total work bays, but as the program becomes more popular, dealerships such as Toyota Shaw and Pasig are thinking of adding more work bays to Express Maintenance service.

I had to leave my Yaris overnight, though, because I wanted adjustments in its alignment (it was pulling to one side, and the steering wheel wasn’t centered), and a check on one of the foglamps, as it wasn’t turning on.

I came back the following day; I was glad that the steering wheel was finally centered, there was no pulling to any side anymore, and that the foglamp socket tightened  that it was lighting up again.

Overall, I was very happy with the work done. It wasn’t just me that left Toyota happy. A few other clients who had their cars up on lifters for the Express Maintenance Service program seemed happy to have their cars serviced very quickly and efficiently.

Though the service was free, I asked my service advisor how much it would have cost, and his quick estimate was  roughly P3,500, including the wheel alignment, four liters of original Toyota, fully synthetic engine oil (at around P700 per liter), genuine Toyota oil filter, and some consumables such as brake cleaners, degreasers, clean rags (I learned that they were all new and clean).

Had I opted for regular dino or mineral oil, the servicing cost would have been only half the price.

The next time you need your Toyota serviced but have a somewhat tight schedule, set an appointment with your nearest Toyota dealership. You wait for no more than 90 minutes, and you’ll be on your merry way, confident that Toyota-certified mechanics serviced your car professionally using certified-original Toyota parts.