Does turning off your car AC really save on fuel? 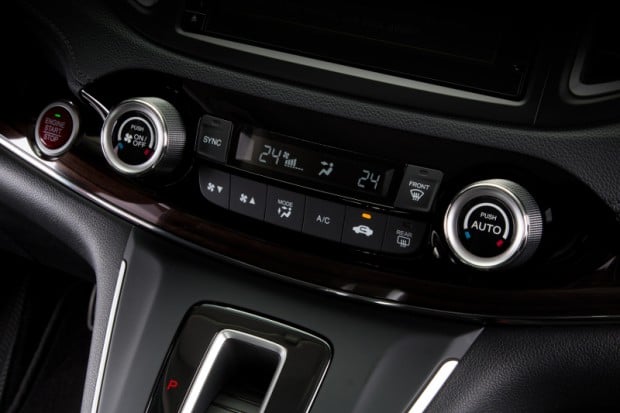 USING THE air-conditioner (AC) versus rolling down car windows is among the most talked about fuel-saving habits uncovered in the Shell FuelSave Fact or Fiction Report, a study that analyzed the behavior of 1,000 Filipino drivers, aged 18 to 40, and conducted by the independent research firm Edelman Berland.

Though the monsoon season has started, it is almost always still hot and humid in the country, forcing motorists to crank up their air-conditioning as they drive through traffic. And now that school season has begun, people are extra budget-conscious so it has become important to get the most out of every gas fill.
Many Filipinos believe that the AC accounts for more fuel consumption, which is why turning it off and rolling down the windows at every chance is considered an ingenious technique to save on gas. An example: some drivers turn off the AC when they are just a few blocks away from their destination.
However, some drivers argue that rolling down windows subjects the car to wind resistance, which creates drag.
According to them, the resistance caused by the drag when windows remain open results in the engine working harder, and therefore uses more fuel.
So how do you settle the question once and for all?
The answer: It depends on a number of factors such as how you drive your car. Turning your AC on or off can help reduce or improve your fuel efficiency depending on driving conditions. With a little bit of science know-how, you can have some control over the fuel efficiency of your car whether using or not using the AC.
Shell put the AC discussion to the test in one of its driving challenges that promoted smart and fuel-efficient behaviors.

Two blogging moms, Sarah Tirona of Fashion Eggplant and Mish Aventajado of Momma ’N Manila, who raise kids and manage their household, beat a team of professional FX and taxi drivers, members of the media and other expert drivers. They opted to drive with their AC off and windows down during slow speeds. The moms, who are used to driving around the neighborhood to accomplish daily tasks, noticed that the motor engine when driving at slower speeds worked harder to run the AC.
So when driving nice and slowly, they turned their AC off and opened the windows—and ended up after combining other fuel-saving tips with a good fuel economy score.

The blogger moms also proved that everyday drivers like them need not be experts. All they needed to do was make some simple changes to their driving habits to manage fuel consumption.

But what about the drag when windows are open?

Depending on car design and seasonal factors, when windows are rolled down, wind resistance can only significantly impact fuel efficiency at speeds of around 85-90 kilometers per hour.

Therefore, it is better to switch on your AC and keep your windows up when traveling at higher speeds, such as driving on a highway, as the amount of energy needed is constant and therefore uses less fuel.

Bottomline, if you’re driving under 85 kph, like the blogger moms, having your windows rolled down is better. If driving faster than 85 kph, using the AC to keep cool is more fuel-efficient.
Obviously, it would be inappropriate to drive with your windows rolled down when it’s raining, or to even turn your AC off while it’s too hot outside. That is why it is important to take advantage of the times when you can turn your AC on and still be fuel-efficient.

Early morning or late evening drives at relaxed speeds can make driving with rolled-down windows a pleasant experience because the temperature is cooler.

Similarly, by choosing to avoid rush-hour traffic or by driving on Sundays when roads are emptier, you can enjoy your AC without feeling guilty of using up more fuel, as you are able to drive at higher and more constant speed.
Setting the thermostat to a level appropriate for the ambient conditions, rather than always putting it on maximum levels, can also help save fuel.

As Jeff Chan, Shell Fuels brand manager of Pilipinas Shell, puts it: “It helps to be smart about fuel efficiency. That is why we advise motorists to take advantage of times when they can be fuel-efficient.

“Shell is committed to educating motorists on smarter ways to drive and on creating innovative products like Shell FuelSave, a regular-priced fuel designed to last longer.

“Not only do you feel confident on the road, you are certain as well that your fuel can help you to get more every time you fill up.”

To discover more tips on how to make your fuel last longer, visit www.shell.com.ph/fuelsave.