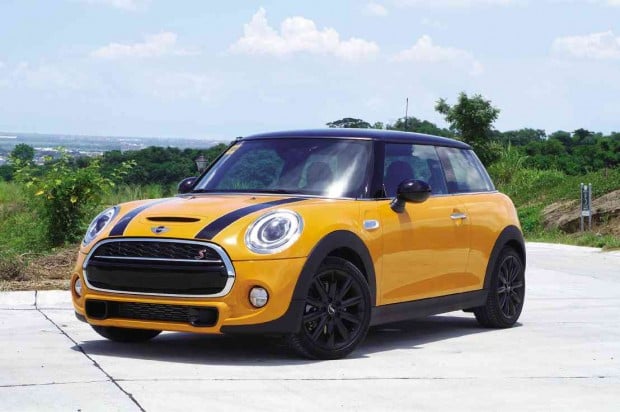 A MINI Cooper S is one of those cars we all need to own at one point in our lives.

The new MINI Cooper S isn’t so MINI anymore. Indeed it still falls within the small car category, but it feels like it went to the gym, became a cross-fit addict and now the skin it wears can barely contain its added size, girth and heft.

It’s 98 mm longer, 44 mm wider and 7 mm taller. This is a good thing though, because it makes the new MINI platform just so much more easier to drive everyday, with more useful space inside and the longer wheelbase means it hops, jumps and shunts so much more less, making it less tiring to drive when you’re not in the mood, and a better, more capable high-speed long-distance tourer. Makes for a perfect getaway car for a romantic weekend for two, and a few small bags at the back.

It’s quite safe too: the Cooper S comes with eight airbags as standard, ABS-EBD brakes with brake assist, traction and stability control. You’ll need it if you plan to probe the limits of the MINI because despite being a cute little car, it’s also got the ferocity of a monster if you don’t respect it.

Tourer. That’s an interesting word, because the new MINI is underpinned with the new modular platform being adopted by its parent BMW. This new modular platform will underpin more BMW variants in the future, with the BMW 2-Series Active Tourer being the first front-wheel drive bearing the BMW roundel.

But has the added size and heft changed the MINI’s go-kart like characteristics? Thankfully no. Power comes from a 2.0 liter BMW TwinPower twin-scroll turbocharged direct-injected petrol engine that delivers a sizeable 189 hp and 280 Newton meters of torque driving the front wheels via a six-speed automatic with paddle shifters behind the steering wheel. The suspension utilizes a front Macpherson-strut design for better packaging, while the rear utilizes a more sophisticated multi-link rear-suspension. The multi-link rear is also the reason why there’s minimal trunk space and the rear seats are tight; tighter than some similarly sized hatchbacks. But up front, the seating position is perfect, and the seats have a great balance of comfort and support even on very long drives and on very aggressive, sporty, manic track-driving. Kudos to MINI for finding such a great driving position.

The suspension is firm, and even without run-flat tires, it’s still firm. This is good for high-speed highway driving, where the MINI feels like it was designed with a lot of Autobahn miles in mind (the A90 through A99 Autobahn routes are some of the smoothest in all of Germany, leading into and out of Bavaria, BMW-MINI’s home).

But on curvy, bumpy, undulating, winding roads, it can give you a bit of a fright: the suspension doesn’t have enough droop at times when you hit a sharp crest, there’s a slight lack of compliance when cornering hard on less than baby-bottom smooth roads, which can get the tail slightly nervous, and large expansion joints unsettle the MINI quite a bit. Or perhaps this is part of its enjoyment? Either way, the large 365 mm steering wheel ensures that you have adequate leverage to snap in a bit of opposite or just corrective lock when needed. Doing so becomes second nature as the steering feels intuitive, accurate and brimming with feel.

The rest goes for the suspension and controls: the suspension, though firm loads up nicely on high-speed sweepers, and once you get used to the somewhat lively rear-end, you know how much allowance you need to give the MINI’s rear end. The brakes were mushy on our test unit, but nothing that a fluid bleed won’t fix. They were strong, fade-free and confident to boot.

We drove the MINI Cooper S down the booming south, through Laguna, parts of Cavite and of course Metro Manila. It’s still quite firm, and using it as a daily driver will be quite tough, and the handling is hair-raising at times, but all in good-natured, cheek-in-tongue fun. It feels alive, invigorating and refreshing to get out of the constant traffic that plagues Metro Manila, and the MINI is just perfect for this occasion without endangering yourself (or your license) too much as opposed to a mega HP car with a far higher top-speed potential. The MINI feels chuckable where other cars feel somewhat lazy, heavy, inert and uncooperative.

Balls-in-throat notwithstanding, the MINI delivers on its promise of a very invigorating drive. Few cars in this price range deliver the smiles per gallon, and while others will argue that a rally-replica like a Mitsubishi Evo or Subaru STI can deliver even greater performance at a cheaper price in a comparable package, none have the excellent build quality, storied past and sense of occasion which the MINI has in spades. The MINI also has far better interior materials used, and the large central LCD instrument cluster displays all the information you’ll ever need to know about: multi-media, vehicle system settings, drive mode and so on. Hopefully we can add SATNAV / GPS soon to future MINI models, making everyday driving even more convenient. It is a truly premium car after all, unlike the Subaru or Mitsubishi rally replicas that are essentially tarted-up variants of mass-market models.

A MINI Cooper S is one of those cars we all need to own at one point in our lives. It’s a true driver’s car, but doesn’t look outlandish and snobby, it has real pedigree, is fuel-efficient and if you’re driving mostly alone, very practical. Fuel consumption was a decent combined 9 km per liter on an engine with only a handful of miles in it, so this should improve vastly. The added size has made it easier to live with as well, and yet the fun-factor is very much intact.

And if you needed even more reason to buy one now, MINI Philippines is offering every MINI buyer until the end of September to go to MINI’s Oxford plant in the UK in November this year to see them in their final production phase prior to rolling out and into a new adventure with their respective owner. Nice package, indeed.