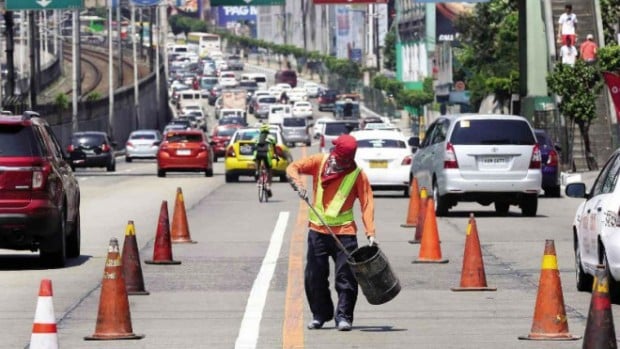 YELLOW LINES A worker repaints the yellow lines on the stretch of Edsa in Guadalupe, Makati City, on Sunday to clearly mark lanes for public vehicles. The Philippine National Police Highway Patrol Group moves in on Monday to help manage traffic at choke points on the perennially congested belt highway. MARIANNE BERMUDEZ

The congestion comes amid tumbling fuel prices, record sales of vehicles and growing populations of Metro Manila and of nearby cities and towns.

Chair Francis Tolentino of the Metropolitan Manila Development Authority (MMDA) said that overseeing traffic on Edsa would not be an easy job for the Philippine National Police-Highway Patrol Group (PNP-HPG), whose officers take over as traffic marshals on Edsa starting Monday.

The move to have the HPG handle the worsening traffic situation on Edsa is the government’s latest attempt in finding a solution to the problem.

In recent months, traffic jams on Edsa and other main roads have worsened, causing massive inconvenience to commuters even past rush hour. Last week, the problem was highlighted by protests staged by members of Iglesia ni Cristo (INC) on Edsa-Shaw Boulevard.

A trip by car from Tandang Sora Avenue in Quezon City to Ayala Avenue in Makati City—a distance of 18 km—now takes two hours in the morning if one leaves between 5:45 a.m. and 6 a.m. The commute is longer by 45 minutes compared to 2010. Taking the same route just after 5 p.m. is another 2.5 hours, up from 1.5 hours five years ago.

The commute was so punishing that an executive of a telecommunications firm in Makati was forced recently to rent a condominium unit in the city where he could stay on weekdays for the sake of his health and sanity. His trip to the office now takes just 20 minutes.

Those without the means to rent a condo have to get up early and endure the productivity-busting traffic congestion by taking the Metro Rail Transit 3 that often conks out.

Traffic congestion is taking a toll on the economy and commuters. Economic losses due to the congestion in Metro Manila was estimated at P2.4 billion a day and could rise to P6 billion a day by 2030 if the government fails to intervene, according to a study by the Japan International Cooperation Agency.

Low-income households have to spend an average of 20 percent of their monthly income for transport, the study said.

The losses do not include the impact of pollution from motor vehicles on the health of residents of the metropolis.

Malacañang urged motorists and street hawkers to observe discipline to help ease the congestion on Edsa.

“We are asking motorists for their full cooperation in observing discipline on the road and to follow traffic laws,” Communications Secretary Herminio Coloma Jr. said on state radio on the eve of the HPG’s new role as the lead traffic law enforcement agency.

Edsa and other major thoroughfares will also be cleared of any obstructions and illegal vending activities, he said.

To further help ease traffic flow, the Department of Public Works and Highways (DPWH) will conduct road engineering to identify the type of vehicles that could pass certain roads.

Speaking on state radio dzRB, Coloma said the HPG’s new role as lead traffic law enforcement agency was a result of a consensus of all government agencies involved in traffic management.

The HPG will also enforce a “no-contact apprehension” of traffic violators by using video documentation, he said.

To further decongest Edsa, Coloma said Monday’s deployment of the HPG would coincide with the rerouting of provincial buses bound for southern Luzon.

Under the scheme, buses bound for southern Luzon will use alternate roads to skip Edsa to get to the expressway. The rerouting scheme will be

Tolentino said the MMDA would still be deploying traffic enforcers in some areas of Edsa like Muñoz and Kamias Road in Quezon City and Ayala and Buendia avenues in Makati.

“Totally, in effect, other areas of Edsa will be indirectly under the HPG but they will utilize some of our men,” he said.

Tolentino said the task of maintaining order on Edsa was not only in the hands of the HPG since this was a “whole government approach.”

The LTO and the LTFRB will be manning bus stops, while the DPWH has started repainting the yellow lanes for public utility vehicles on Edsa.

“Our ultimate policy solution for the traffic was to maximize the transport of people on Edsa. It is the people who need to be transported, not the cars,” Tolentino said.

A ceremonial sendoff with PNP Director General Ricardo Marquez at the PNP national headquarters in Camp Crame will be conducted early Monday before the HPG team is deployed to Edsa.

The HPG spokesman, Supt. Oliver Tanseco, said the unit was accepting the challenge.

“Some of our men have undergone a three-day training on traffic management at the MMDA Traffic Management Institute and we vow to implement zero tolerance on all those who will violate traffic rules,” Tanseco said on MMDA’s radio program.

The HPG earlier said it would field big, burly traffic policemen to the choke points to “scare” even the most hard-headed motorist into following traffic laws.

Originally, the HPG planned to deploy just 96 officers, but Tanseco said the unit increased the deployment to 150 after a recent assessment.

The public can expect to see the policemen in their patrol cars and on motorcycles, doing their job as early as 5 a.m.

Tanseco said the HPG would be on Edsa 24/7, with deployment based on shifts and on the traffic situation.

Antonio Pagulayan, acting head of the Institute of Traffic Management (ITM), said the methods of teaching HPG officers had been improvised.

“Aside from the classroom and focused-group discussion, we also used tabletop discussion using matchbox-sized cars and a map to let them visualize the traffic situation along Edsa,” Pagulayan said.

On the last day of training, the HPG members, working in groups, identified problems and possible solutions to the traffic challenges.

“As a culmination activity, we had a walk-through on Saturday at the six major choke points from 1 p.m. to 5 p.m. to familiarize them on the actual traffic problem,” Pagulayan said.

Tolentino said motorists, who would have complaints on the apprehension process, could file cases in the MMDA adjudication board. Christine O. Avendaño, Maricar B. Brizuela and Julie M. Aurelio