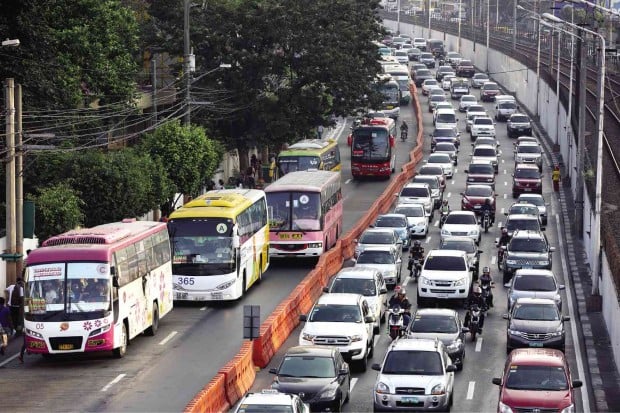 DRIVERS of passenger buses and private vehicles stick to their designated lanes in Guadalupe, Makati City, to avoid being slapped fines ranging from P200 to P500. NIÑO JESUS ORBETA

AT LEAST 61 private vehicles and 70 public utility buses were flagged down for violations a week after the Metropolitan Manila Development Authority (MMDA) started enforcing the yellow-lane restrictions on Edsa’s southbound lane.

MMDA chair Emerson Carlos gave the report as he claimed that travel time for buses had been reduced by as much as 30 minutes on the country’s busiest highway.

But the official said he was surprised that a large number of buses were still caught going outside the yellow lane and encroaching on the area for private vehicles.

“Why would they still want to use the lanes for private cars when the bus lanes are fast-moving? They will not be able to get passengers from the private lanes and they also cannot unload people in the middle of Edsa,” he noted.

An erring bus driver is slapped a P200 fine while a private motorist pays P500 for the lane violation.

The MMDA chair explained that there are exemptions for private cars, taxis or AUVs (Asian utility vehicles) that need to enter the yellow lane. “They can use it if they will turn right on the next intersection or if they will unload passengers,” he explained, noting that only those who “take advantage” of the bus lanes to reach their destinations faster are apprehended.

The strict implementation of the yellow lane rule was one of the solutions pushed by the Edsa technical working group, which is composed of the MMDA, Philippine National Police-Highway Patrol Group, Land Transportation Franchising and Regulatory Board, Department of Transportation and Communications and the Department of Public Works and Highways (DPWH).

Meanwhile, MMDA Traffic Engineering chief Neomie Recio also announced that the plastic barriers currently used to separate lanes would soon be replaced with more permanent, concrete separators to be provided by the DPWH.

Replacing the plastic barriers was deemed necessary since they can be easily damaged or knocked out of place when hit by vehicles, she added.

“Our plastic barriers are only temporary,” Recio said. “They are also hard to manage because they can be easily moved (out of alignment). If one is hit by a vehicle, all barriers move because they are interconnected.” –Maricar B. Brizuela