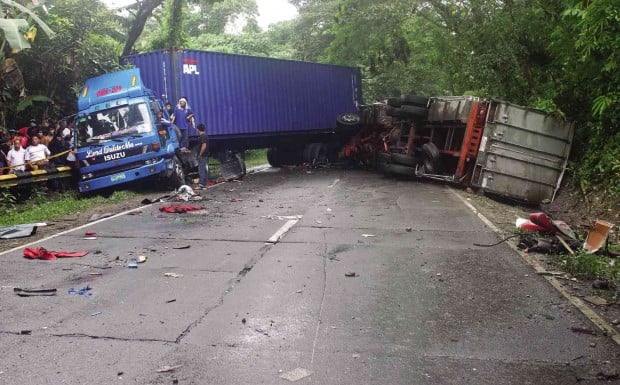 ERRORS caused by truck drivers have been found to be a major reason for road accidents. CONTRIBUTED PHOTO

NOT A day passes, it seems, without a horrific road accident involving trucks making it to the news. And in almost every truck mishap, the driver and/or his pahinante (assistant), if they survive, claim that the truck “lost its brakes, or lost control.”

But any thinking, talking life form will tell you that such an excuse, even if true, didn’t happen out of thin air. A series of unfortunate, and very avoidable, events must have transpired for the brakes, or the steering mechanism, of a truck to fail.

InquirerMotoring recently talked to a global positioning system (GPS) provider for company fleets, and revealed six of the most common mistakes that truck drivers commit.

1. Detouring from the official route

Salvador Buddy Silva III, chair and CEO of SafeSat GPS Tracking and Asset Management System Corp., said, “We notice that some truck drivers do other things, or go somewhere else, delaying their deliveries, thinking they can always catch up with the time.

“What they may not be aware of is that the more they try to catch up, fuel efficiency and, more importantly, safety, are sacrificed.”

Silva revealed that the SafeSat GPS device enables truck operators to monitor the whereabouts of their assets such as vehicles, fleet and personnel in real time via the cloud (web-based).

Silva’s observations of the whereabouts of many truck drivers using the SafeSat device led him to this first conclusion.

The SafeSat device, which also monitors the vehicle’s speed in real time, also reveals that many truck drivers violate speed regulations, most likely borne out of recklessness or overconfidence.

“Many truck drivers believe that they can cover 200 kilometers in two hours on the highway, but only safely so in three or four hours. This brings about increased expenses for owners and operators in terms of increased fuel consumption and wear and tear on moving parts, not to mention the unnecessary risk these drivers subject themselves, and others around them, to.”

This devil-may-care attitude, Silva believes, may be the result of the drivers’ lack of sense of ownership of the vehicle, “hence the device shows many unsafe driving practices of these truckers, which includes numerous cycles of excessive acceleration, then heavy braking. This wears the brake system out faster than expected.”

Silva also noted, from records culled through SafeSat, that truckers tended to drive nonstop. “Truck drivers need rest, ideally 10- to 15-minute breaks every three to four hours, even when they don’t feel sleepy. And the trucks’ tires also need to be cooled down because long-distance driving builds up heat and tire pressure in the radials. Trucking companies should make specific stops for their drivers and trucks mandatory.”

Silva added that too much heat could affect the truck’s brakes as well.

It’s the oldest trucker’s violation in the book. Sadly, many trucking companies still overload their rigs in order to maximize profits for every trip.

“We all know that the heavier the load, the more braking force is needed. Imagine if your truck is loaded with twice the weight it’s designed for. The pressure on the brakes would be too much,” Silva said.

Silva, in his dealings with numerous trucking firms, noticed that the companies neither enforce standard speed limits on their fleet, nor train their drivers to follow speed limits on specific stretches of their itineraries.

“Some companies want their drivers to not go over 70 kilometers per hour, while others set the limit at 60 kph. There’s no standard for safe speeds.” That means truck drivers are left to largely interpret on their own their driving speeds at any given time.

6. Blind faith on the brakes

It’s one of the most dangerous habits a truck driver may possess—that blind faith on his truck’s brakes that it will serve him all the time, without fail.

“In general, you will know a driver’s general mind-set when he applies the brakes. You will know how he will treat the vehicle by how gentle, or harshly, he will use those brake pedals,” Silva analyzed.

He said that SafeSat can roughly show the truck drivers’ accelerating and stopping habits by the use of the built-in accelerometer and sudden-speed-change sensor detection system that records the drivers’ abrupt acceleration and braking.