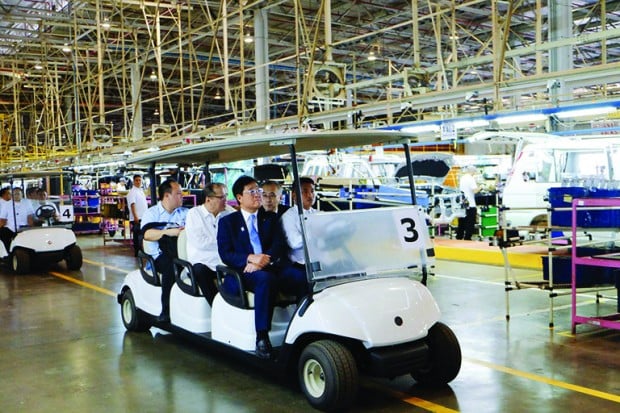 Mitsubishi Motors Philippines Corp. (MMPC) is investing P4.3 billion to beef up its production assembly facilities in Laguna to prepare for its participation in the government’s Comprehensive Automotive Resurgence Strategy (CARS) program.

In a press briefing on February 10, Osamu Masuko, chair and CEO of Mitsubishi Motors Corp. of Japan, announced that the company’s local unit, MMPC, intended to avail itself of the incentives under this program to produce the hatchback and sedan units of its Mirage.

“We will immediately file application to the CARS Program and when accepted, we are planning to start production of the hatchback and sedan of Mirage starting 2017. The production site will be in the Sta. Rosa plant where MMPC has started its operations in January last year. In line with starting the production of the new model, MMPC has a plan to invest P4.3 billion, which will include a stamping facility under the first phase to increase local content,” Masuko announced.

Masuko explained that the planned investments would also help expand the employment opportunities in the local automotive sector.

“Moreover, with the new model production plan of MMPC, we have asked the parts suppliers which have decided to penetrate into the Philippines to accompany us. (This will result in) the expansion of existing production base and provide technology for local corporations,” he added.

Masuko pointed out that the Philippines was one of the most important markets for MMC as they saw a high potential for growth for the local automotive industry.

The government issued last year Executive Order No. 182 on the implementation of the CARS Program, which dangles some P27 billion worth of incentives to local vehicle assemblers. This program is expected to attract more than P27 billion in new parts manufacturing investments; produce at least 600,000 vehicles; generate 200,000 new jobs and a total economic activity estimated to be worth P300 billion. The resulting contribution to gross domestic product was estimated at about 1.7 percent. –