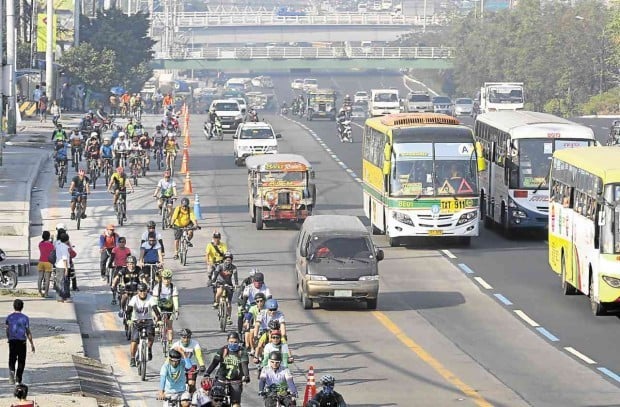 BIKERS participating in a road-sharing experiment ride down Commonwealth Avenue without fear of being mowed down by speeding vehicles. NIÑO JESUS ORBETA

COMMONWEALTH Avenue in Quezon City was turned into a bike and pedestrian-friendly zone on Sunday as part of an ongoing road-sharing exercise but not everyone was in favor of it.

Asian Paralympic Games cycling medalist Godfrey Taberna, said he may be 100 percent behind the bike lane movement in Metro Manila but was opposed to the concept of road-sharing which, in his opinion, will only put cyclists’ lives at risk.

Taberna expressed his views at the sidelines of the road-sharing exercise upon the initiative of the Metropolitan Manila Development Authority (MMDA).

Taberna’s opposition has a very strong basis. His father—a retired military officer—died two years ago in a hit-and-run accident while biking in Nueva Vizcaya. His son has since joined the Families of Road Victims and Survivors (FRVS), a support group for road crash victims and their families.

Formed in 2009, it now has over 3,800 members, some of whom took part in Sunday’s road-sharing exercise. Unlike the other participants, however, they kept to the sidewalks instead of using the outermost lanes of Commonwealth Avenue which the MMDA had set aside for the day for bikers.

“I am a national athlete but I do not want to share the road with buses and other vehicles because I know the dangers this poses,” said Taberna, a paracyclist who has bagged several medals in various competitions, including the 2014 Asian Paralympic Games.

He explained that biking alongside motor vehicles threatens the safety of bikers and even pedestrians. “Not all are equipped with proper bike handling skills and the discipline among motorists is also a problem,” Taberna said.

He reiterated the sentiments of the FRVS on the lack of “integrated, protected, elevated and segregated bike lanes” in the metropolis.

According to the group’s president Erwin Paala, 196 bikers were killed in road crashes in the Philippines from 2005 to 2014. “What is more alarming is that more than 7,000 persons have been disabled in the same period because of road crashes involving bikers,” he said.

During Sunday’s exercise, Paala called on the road-sharing participants not to use Commonwealth Avenue for walking and biking. He urged them to stick to the sidewalks which have been converted into a pedestrian/bike lane.

He pointed out that the P388,000 spent on the pedestrian/bike lane would go to waste should officials insist on allowing bikers on “the dangerous killer highway,” a moniker given to Commonwealth Avenue for its high rate of road accidents resulting in fatalities.

Paala said he knows what he speaks of since he was dragged by a jeepney along the killer highway in 1989. “I was in a coma for 16 hours due to multiple injuries which left my family saddled with a huge debt,” he added.

“The proponents of the activity have no right to experiment [with] human lives. For those who have already lost loved ones, there is absolutely zero room for error. For those in the FRVS, one life is way too valuable. One death is far too many,” Paala said.

For Jeremia Espinar, Sunday’s road-sharing exercise was a welcome respite from constantly having to worry about his safety while biking on Commonwealth Avenue.

According to the security guard of the Philippine Amusement and Gaming Corp. who has been biking for five years, he has always exercised a lot of caution while traveling in the area because of the big volume of vehicles and the lack of bike lanes.

On Sunday, he and his fellow cyclists had the outermost lane of Commonwealth Avenue to themselves while the rest of at least 500 attendees walked for a few kilometers using the sidewalks.

Environmentalist and lawyer Antonio “Tony” Oposa, who pioneered the road-sharing campaign in the country, said that the activity was held to show that “we can have an orderly public transportation system” and that various groups and individuals can get together to “implement the beginnings of a vision.”

That “vision of hope,” Oposa said, was that Filipinos can be counted on to practice discipline.

The activity which started at 8 a.m., however, suffered a slight hiccup as Oposa said that the wooden signs put up by the MMDA hours before the exercise were stolen, making it hard for the participating buses to know where the designated loading and unloading areas were.

He also noted that several portions of the sidewalk were occupied by parked cars and even makeshift stalls. According to Oposa, he would ask the Quezon City local government to relocate the stalls to make way for pedestrians.

Land Transportation Franchising and Regulatory Board Chair Winston Ginez, who showed up at the event to throw his agency’s support behind the activity, said that the core of the exercise was for people to have “self-discipline” in the use of the road.

“This is a way to educate our drivers both in buses and private cars that they should remain in their designated lanes, and that the commuting public should only alight or ride at designated unloading and loading areas,” Ginez said. – Jovic Yee, Maricar B. Brizuela