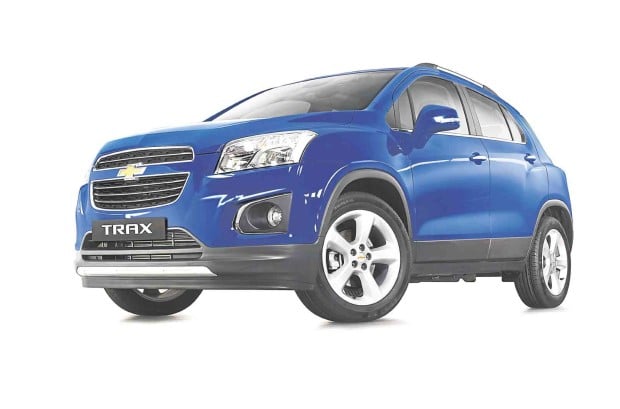 THE TRAX has a compact footprint, making it perfect for urban dwellers who have to contend with tight parking spaces and narrow inner roads.

If there’s one car people should be paying more attention to, it is Chevrolet’s Trax.

The overall packaging is ingenious, the powertrain is impressive, the space is very good and versatile inside, and the price is very competitive.

The Trax is built atop Chevrolet’s Gamma II platform, which also underpins the AVeo and Sonic subcompact cars. This gives the Trax a compact footprint, making it perfect for urban dwellers who have to contend with tight parking spaces and narrow inner roads.

It also makes it less daunting to drive for first-time drivers and females, as the Trax is also a perfect family car for new and small families with kids.

The overall length is a useful 4,248 mm and the long wheelbase (for its size and class) measures 2,550 mm, giving impressive useable cabin space despite its overall short, squat and somewhat square dimensions.

You also get a very useful 157.5 mm of ground clearance, more than enough to climb up some curbs should you need to park in the urban jungle, or do some (very light) off-road work.

I tried searching for its maximum fording/wading depth but alas came up with nothing. Realistically, it looks like the Trax can cope with 400 mm-plus of water but I hope someone verifies this from Chevrolet.

The powertrain is by way of a 1.4-liter turbocharged gasoline engine, serving up a grunty 140 horsepower and 200 Newton-meters of torque powering the front wheels via a six-speed automatic transmission, delivering it class-leading fuel economy, low-rev willingness, and a decent cruising speed versus engine rpm to make it comfortable on a long drive.

So eager is the engine lowdown that I initially thought the Trax was diesel-powered, and had mistakenly mentioned it elsewhere. But there is indeed a diesel-powered Trax, which, fingers crossed, I hope finds its way to the Philippines, making it even more enticing and attractive.

Turbocharging is indeed the way of the future, despite what some purists and enthusiasts might decry. But for average consumers like you and me, this is a godsend, as turbocharging means more powerful and environmentally friendlier engines in a smaller, lighter package.

This also frees up space in the engine bay, increasing crash protection and making our cars safer in the process.

The Trax is also loaded with safety features: six airbags come as standard, along with ABS-EBD brakes plus cornering brake control and emergency panic brake assist, StabiliTrak traction and stability control, rollover mitigation, and as a sign that Chevrolet expects you to go places where you normally wouldn’t go, hill-descent control.

There’s also Isofix child seat mounts, DRLs to increase your visibility during the day, and a rear-facing reverse camera to make parking and backing out of a tight spot offroad much easier.

Driving in the city, the Trax doesn’t disappoint. It’s easy to nose in and out of tight spots.

There’s plenty of power for your typical stoplight grand prix matches, and you instantly feel confident about the Trax’s dimensions which leaves you relaxed. 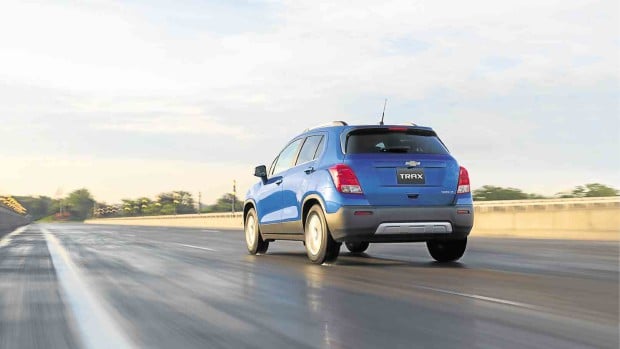 THE TRAX would look perfect for out-of-town trips.

On the highway, the engine is a bit noisy (probably due for service as my test unit looked a bit battered from miles upon miles of demo use) but the car felt tight nonetheless.

Fuel consumption is a decent 7.7 km per liter in the city, and would hit as high as 12-13 kpl on the highway.

Take this, though, with a grain of salt since my driving style is quite aggressive, plus my weekly trips to Tagaytay means I spend a lot of time uphill overtaking trucks on the narrow Tagaytay-Sta. Rosa Highway.

I’m sure the fuel consumption can be better with a more sedate, relaxed driving style both on the highway on long drives and in the city.

It’s also a perfect outdoor lifestyle kinda car: mount a roof rack from a variety of brands such as Rhino-Rack, strap in a small canoe, surf boards, bicycles or what have you, and the Trax looks perfect with your outdoor gear mounted atop it.

As I mentioned earlier, the Trax would make for an ideal family car: measuring 1,670 mm in height, the somewhat tall and boxy profile means getting in and out is easy, handy for the elderly, or for carrying kids.

It also makes successive short drives easy, like when you need to go to the grocery, laundry shop and the bank. It didn’t seem to be bothered by strong crosswinds driving at the legal limit on the Skyway especially between Bicutan and Sucat exits, which is a blessing as some slab-sided, tall-riding cars I’ve tested require good concentration to keep it tracking straight in this area.

Driving position is pretty good: for a subcompact crossover SUV, it feels roomy inside, and the range of adjustment from the seats and steering wheel is good even with my XXL frame.

The rear seats split-fold 60:40, and Chevrolet says there are a total of 18 possible seating arrangement combinations should you need to carry tall, wide, boxy objects inside.

There’s also an unnatural feel to its self-centering action, something a lot of Chevrolets (sans the Colorado and Trailblazer) seem to have. Perhaps a retune to the sensitivity and assist of the electronic power steering should be considered in the future.

About the only real complaint I have with the Trax, as with all Asian Chevrolet models, is that the interior feels somewhat low-rent compared with the current crop of Japanese brands and even Ford, all of which have been trying to really move upmarket in terms of specs and options.

Luckily, the Trax only has two real competitors: the Ford EcoSport, which I find dreadfully underpowered and slightly underwhelming in real-world conditions; and the Hyundai i20 Cross Sport, which comes with a diesel option but unfortunately, no automatic.

Both Hyundai and Ford admittedly have much nicer interiors than the Trax, and if you will be spending a significant amount of your time sitting inside the car in traffic, you will want a nice, upscale cabin especially if you will be keeping your vehicle for five years or longer.

Misgivings about the interior aside, the Chevrolet Trax is a really good alternative.