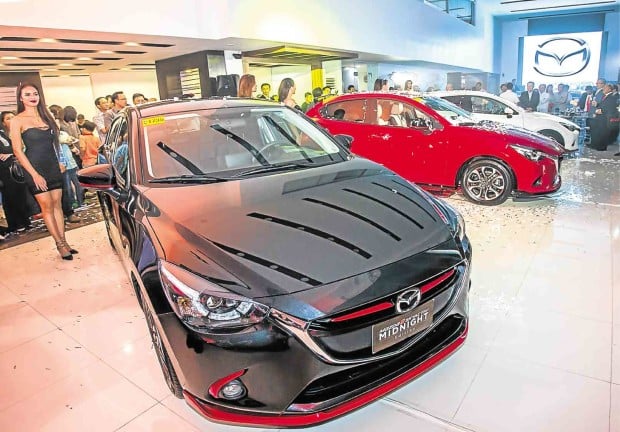 Back in the 1990s, Cebu earned the popular moniker “Ceboom” for its remarkable growth spurt. Nearly 30 years later, the Queen City of the South has sustained that growth, and has accelerated even some more, hence the province—and its proud city—has become synonymous to the country’s own economic boom.

This, combined with the province’s growing population of young professionals and a low ratio of cars to the general population, makes Cebu so sweet as its legendary dried mangoes for the auto industry’s pickings.

Mazda Cebu, it seems, couldn’t wait to get its business engines running, and decided to launch in one day—May 21 —its P70-million Mazda Cebu showroom, its P2.8-million satellite showroom in SM Seaside City, and the Mazda2 SkyActiv Premium Edition.

The nine-year-old Mazda Cebu showroom and service center has been upgraded and expanded into a 3,182-square-meter automotive hub.

The dealership has been upgraded to keep up with the new global Mazda standard. Mazda Philippines and Cebu Southbay Automobiles formally reopened the Mazda Cebu dealership.

On the other hand, the satellite showroom-cum-sales outlet at SM Seaside City Cebu is 163.58 sqm.

The Mazda Cebu dealership along Juan Luna Street, Mabolo, Cebu City, and the mall showroom are the only Mazda facilities in Cebu.

During the reopening ceremonies of the showroom, the three Mazda2 variants outfitted with special body kits comprising the Premium Edition were also unveiled, and were dubbed the Crimson, Kabuki and Midnight editions.

“Mazda Cebu was our first automotive dealership. It was a real challenge because we had to learn the ins and outs of the automotive business,” said businessman and car enthusiast Albert C. Go, Mazda Cebu dealer principal and president, during the May 21 launch.

“In 2014, Steven Tan (Berjaya Auto Philippines’ president and CEO) persuaded us to expand our operations here in Cebu to showcase Mazda’s new designs and technology. Our shareholders embraced the idea wholeheartedly and made a major investment in the facilities. Customers also responded very well to the new products and the marketing campaign,” Go added.

“The Cebu economy has always been vibrant, it will continue to be so. It can also serve as a gateway to other places in the Visayas,” Yu quipped. “But don’t forget Davao,” he quickly added.

She added that after the introduction of the SkyActiv models, there was a big shift toward the A, B and upper C markets.

With the influx of new vehicles in Cebu, there has been a growing public clamor for improved and expanded road networks.

In 2015, transportation engineering expert Primitivo Cal was quoted by Cebu Daily News as saying that traffic congestion in urban Cebu has become almost as bad as that of Metro Manila, but that curtailing car ownership per se would not solve the traffic problem.

“Cebu traffic is way more manageable than (that of) Metro Manila, although if no solutions are implemented in the next few years, we may be well headed toward the same direction,” said Padilla.