Allure of a French hatch 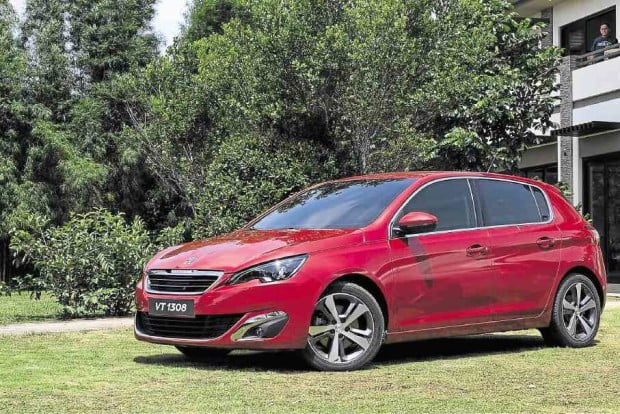 Built on a new platform, the 2016 Peugeot 308 hatchback is lighter, leaner and more fun to drive. –PHOTO COURTESY OF Peugeot ph

Watching the 2016 Peugeot 308 approaching you at night is an experience.  With its slim LED projector headlights bordered above by downward curving LED daytime running lights (DRLs), the 308 approaching in the dark looks like a slant-eyed cat about to pounce.

But the feline look is not the only unique, if peculiar, characteristic that sets the five-door 308 Allure apart from its rivals in the compact hatchback segment.

The leather-wrapped steering wheel is unusually small in diameter and set low while the instrument binnacle is set high (“head-up”) with analog gauges whose needles run counter-clockwise instead of clockwise.

The purpose, obviously, is to look over—not through—the steering wheel to see the speedo and tachometer. Although the driver’s seat is manually height adjustable, some practice is needed to get a comfortable driving position that gives a clear view of the gauges.

Another unusual, albeit welcome, feature in Peugeot’s i-Cockpit is that there is only one central button instead of numerous switches, knobs and buttons on the center stack panel. A 9.7-inch touchscreen centralizes the controls for functions and applications such as the air-con, reverse camera, radio, USB and Bluetooth connectivity. 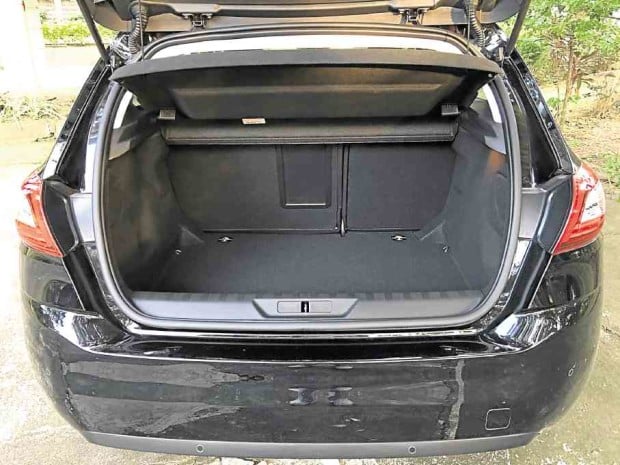 The 308 hatchback’s generous trunk space (385 liters, expandable with the rear seats folded) is one of the best-in-class.

The large touchscreen gives the dashboard a clean, uncluttered appearance while soft-touch materials and metallic highlights give the cockpit a premium, classic look.

The exterior of the 308 also projects a classic, tidy presence via its clean, minimalist lines. Built on the new EMP2 platform that is 70 kilograms lighter than the old structure and that has a 20 mm lower center of gravity, the 2016 308 is more aerodynamic, leaner and more fun to drive.

Although the body is lighter, greater use of ultra high-strength steel and innovative production techniques ensure that the savings in weight do not compromise quality or rigidity. 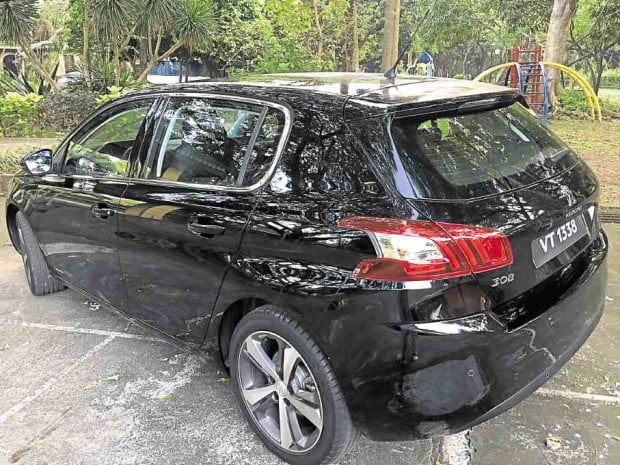 Because of the EMP2 platform and the redesigned cooling system, the front and rear overhangs have been reduced, allowing wheel placement nearer to the four corners which, in turn, enhances driving dynamics.

Two hundred forty Nm of torque available at an early 1400 rpm delivers a lot of punch for such a small, light car.

Fitted with a twin-scroll turbocharger, a high-pressure direct petrol injection system, and variable lifting intake valves, the engine is mated to a new 6-speed Aisin automatic transmission with Quickshift technology that provides linear and fast gearshifts.

On the road, the 308 hatch is delightfully nimble and responsive, feeling planted when tackling corners and cruising quietly at highway speeds, especially on long straights.

The all-new suspension of the 308, with wider tracks, 20 mm lower longitudinal roll axis and changes made to the torsion beam rear end, limit body roll. 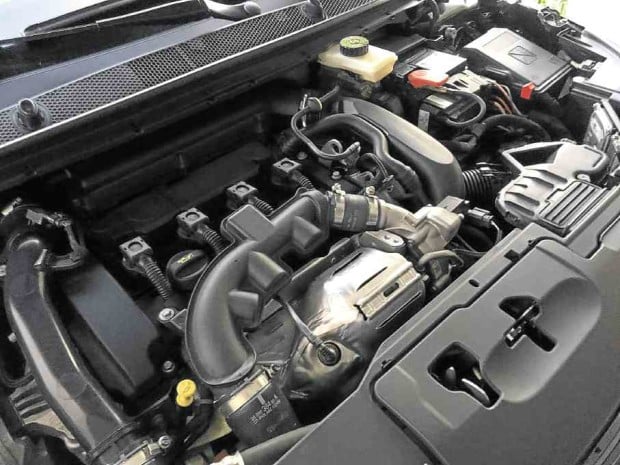 Improved damping results in quiet, comfortable motoring on all kinds of road surfaces.

The brakes, front and rear discs, are strong and sometimes oversensitive.

Driving the 308 in city traffic at urban speeds and maneuvering to park, the small diameter steering wheel makes the car feel light and manageable.

But when you hit highway speeds, the electric power steering imposes controlling weight to stabilize the car, thus affecting its agility a tiny bit.

Moreover, when the engine is cold and you floor the accelerator, it takes a few seconds for the turbo to kick in. Once the turbo is there, it does produce and maintain a good amount of thrust.

The 1.6 THP petrol powerplant performs like a normally aspirated engine with a larger displacement, yet consumes less fuel. It reportedly uses only 5.6 liters per 100 kilometers. 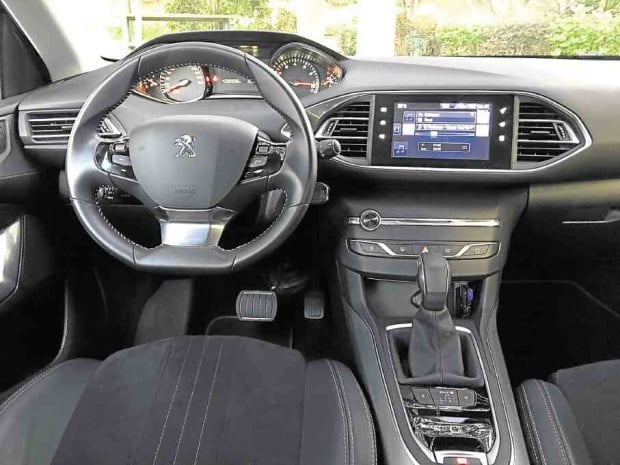 In the cockpit, a small steering wheel and a big (9.7”) touchscreen with the sophisticated graphics as the major controls

In fact, fuel economy is a major reason for the downsized turbo engine. It makes you wonder why Peugeot did not install a stop/start device that automatically turns off the engine when the car is idling at a red light.

The 308 Allure hatchback is by no means a high-performance car like the 308 GTI. It was designed primarily for comfortable motoring and perhaps mainly for young families, as evidenced by the softened suspension springs and legroom in the back seat only adequate enough for two or three small children.

There is plenty of space for adults in the front, and the well-bolstered seats have adjustable height and lumbar support to prevent backache on long journeys.

On the other hand, it lacks storage cubbies for drinks, keys and other small items.

The 308 hatchback’s 385-liter cargo capacity, expandable when the rear seatbacks are folded, is one of the largest in its class. However, rear legroom had to be sacrificed for this.

Summing up, the 2016 Peugeot 308 Allure hatchback is a handsome compact hatchback, a comfortable cruiser that is nimble and fun to drive with a smart, premium and well-kitted interior, and above all, one of the most fuel-efficient petrol engines in its class.

It has a few unusual characteristics, French version, but nonetheless richly deserves its P1.49 million SRP.