Ferrari: 70 years of a legend 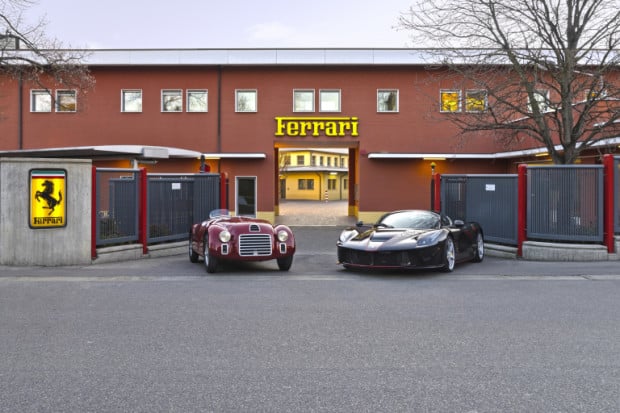 There are 70 years between this Ferrari 125 S and the LaFerrari Aperta. Image: Ferrari via AFP Relaxnews

On March 12, 1947, Italian motor racing team Scuderia Ferrari, which previously raced Alfa Romeo cars, presented its first in-house creation, the 125 S, in the courtyard of its factory in Maranello, Italy. The 125 S was the first in a long line of sports cars, both for the road and for competition, which shaped the carmaker’s legendary status.

The 125 S was directly inspired by the AAC 815, a car that Enzo Ferrari designed and built in 1940 under his brand of the time, Auto Avio Costruzioni. In fact, certain purists consider this to be the first real Ferrari.

The mythical Maranello factory saw the light of day in 1942 and five years later, the first Ferrari-branded cars rolled off the production line. The Ferrari 125 S, with a 118Hp V12 engine, made its competition debut in 1947. Its first wins started a long list of prizes and achievements for the car maker.

In 1947, Ferrari presented its first grand touring (GT) model, the 166, a sporty car with sleek lines. Around a hundred cars were built across the various 116 models (Sport, Inter and MM).

Like all Ferraris, the hoods of these early cars were adorned with a small black horse rearing up on its hind legs against a yellow background. The Italian brand’s famous badge has been used on all the firm’s models, whether road cars or competition cars. It pays homage to the aviator Francesco Baracca, a First World War Italian Air Force ace, killed in 1918, to whom Enzo Ferrari was particularly close, and who used to paint a horse on the side of his planes. Scuderia Ferrari first started using the “prancing horse” logo in 1931 on Alfa Romeo cars that the team was racing at the time.

Ferrari’s glory was evidently built on the race course and is intrinsically linked with the history of Formula 1. Scuderia Ferrari is the only team to have participated in all editions of the Formula One World Championship since its creation in 1950, while also holding the most constructors’ championships and the highest number of winning drivers. Ferrari also competed in the 24 Hours of Le Mans, from 1949 with the Ferrari 166 MM, and all other endurance classics until the 1970s.

Its racing success and the high-quality finish of its GT models soon gained international renown for Ferrari. In 70 years, the Italian carmaker has released some of the most stunning grand touring cars in history, from the Ferrari 250 series and the F40 to the Dino 246 in its various versions, the Testarossa and the more recent LaFerrari hybrid. These models today sell for eye-watering prices at auction.