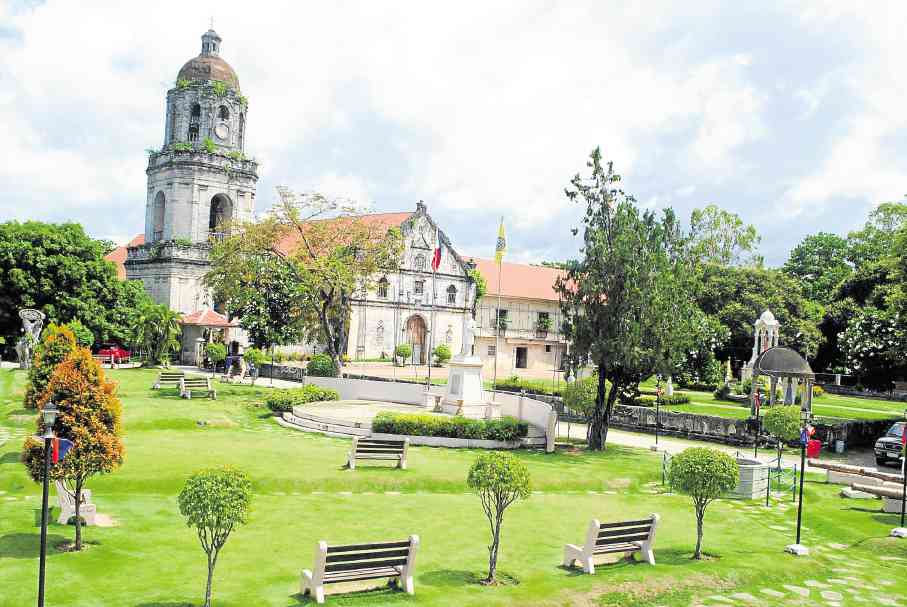 The Augustinian Church of St. Michael Archangel in Argao, Cebu

To devout Roman Catholics, the Visita Iglesia on Maundy Thursday is a ritual one must undergo to fulfill one’s religious obligations.

The traditional visit to seven churches traces its roots from the ancient Jewish pilgrimage to the Temple in Jerusalem for the Passover, the most important feast of the Israelites that happens around the Christian Holy Week.

And just like any religious sojourn, there is a built-in tourism component associated with the movement of people from one place to the next.

To many people, the tradition can also mean an anticipated road trip through the gorgeous countryside, and the horrendous Edsa-like traffic jam is part and parcel of the sacrifice that goes with this Lenten practice.

Below are some suggested Visita Iglesia “praygrounds” which combine religion, motoring, and a rediscovery of the Philippines’ rich ecclesiastical and cultural heritage, and everything in between.

And here’s a bonus—these are among the most Facebook- and Instagram-worthy houses of worship that you can post later.

One of the most popular circuits for Metro Manilans is the so-called “Laguna Lake loop” where one can go around the churches along the shores of the Laguna de Bay, the country’s biggest lake.

Since the South Luzon Expressway (SLEx) can be a virtual parking lot on Maundy Thursday, one can start in Rizal province at the Shrine of the Our Lady of Peace and Good Voyage in Antipolo, St. Joseph Church in Baras, and the San Ildefonso Parish in Tanay.
On the Rizal portion of the lake, make pit stops at the St. James Church the Apostle in Paete (which has an intricate retablo, stained glass windows, and wooden sculptures of local artisans), San Sebastian Church in Lumban, the Our Lady of Guadalupe Church in Pagsanjan (whose chapel bears a stone from Mexico where the Virgin Mary is believed to have appeared), and the San Antonio de Padua in Pila.

Conclude the loop at the St. Joseph Church in Calamba where national hero Dr. Jose Rizal was baptized and grew up as a young parishioner. His house is located a stone’s throw away from the parish.

On the southern stretch of the Maharlika highway are the San Pablo delos Montes Cathedral in San Pablo City, Laguna.

Crossing over to Quezon, there is the Basilica of St. Michael Archangel in Tayabas, (which boasts of one of the longest aisles) and the Kamay ni Jesus (a prayer and healing center in Lucban which is a certified crowd drawer).

At the poblacion is the San Luis de Obispo Church, where the colorful May-time Pahiyas Festival revolves.

Round up your panata in Quezon at the St. Francis of Assisi in the heritage town of Sariaya, the Peñafrancia Church, the St. Ferdinand Cathedral in Lucena, and the St. Anne Parish of Pagbilao (whose massive bells are strung by a tree vine).

Further down south, Albay has a veritable array of Spanish-era churches that have withstood the ravages of time, starting with the St. John the Baptist Church in Camalig, which is regarded as the antiquarian village of the province.

Declared recently by the National Historical Commission as a historical landmark, it takes pride in its convent. 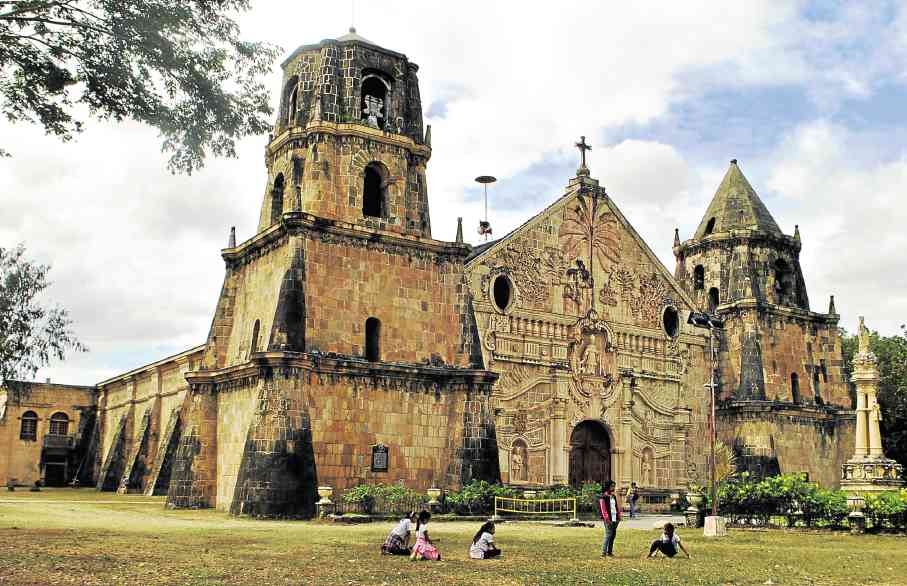 Swing by the Nuestra Senora de Porteria Church in Daraga, which was declared a National Cultural Treasure by the National Museum because of its unique Baroque architecture.

Located at an elevated portion of the town, it provides an unhampered view of the perfect-coned Mayon Volcano.

The St. Gregory the Great Cathedral in Legazpi City, the St. Dominic Church in Sto. Domingo (where foremost Bicolano composer Potenciano Gregorio served as musician), the St. John the Baptist Parish in Tabaco City (another National Cultural Treasure), the stone-washed St. Lawrence the Martyr Church in Tiwi, and the Parish of Saints Joachim and Anne in Malinao.

An alternative site is the Our Lady of Joroan Church in Tiwi, one of Bicol region’s Marian pilgrimage centers, and home of an age-old maritime procession every August.

If you’re headed up north of Luzon, Pangasinan is an exciting prayground with its note-worthy churches and contiguous tollways that wind up at the Tarlac-Pangasinan-La Union Expressway (TPLEx).

Just a few kilometers from the Binalonan exit is the Our Lady of Manaoag Church, a favorite pilgrimage site for people with prayer petitions, especially those with serious illnesses.

Declared a Minor Basilica by the Vatican because of its historicity, it also has an ecclesiastical museum that chronicles the history of the parish and Manaoag town through the centuries.

Complete your circuit with Calasiao Church, a National Cultural Treasure, Dagupan Cathedral, seat of the one of the North’s biggest dioceses, the Nuestra Senora Purificacion Church in Binmaley, the Epiphany of our Lord Church in Lingayen which has a display of big antique bells, the San Isidro Labrador Church in Labrador, San Jose Church in Alaminos City, and St. James the Great Church in Bolinao, which is the site of one of Luzon’s earliest masses.

Going around the Visayas

Cebu Province has an exciting series of churches being the bastion of Catholicism in the south.

An hour down south is the Moorish-inspired St. Catherine Church in Carcar City, the old town of the province which is also home to antique carrozas that are paraded on Good Friday. 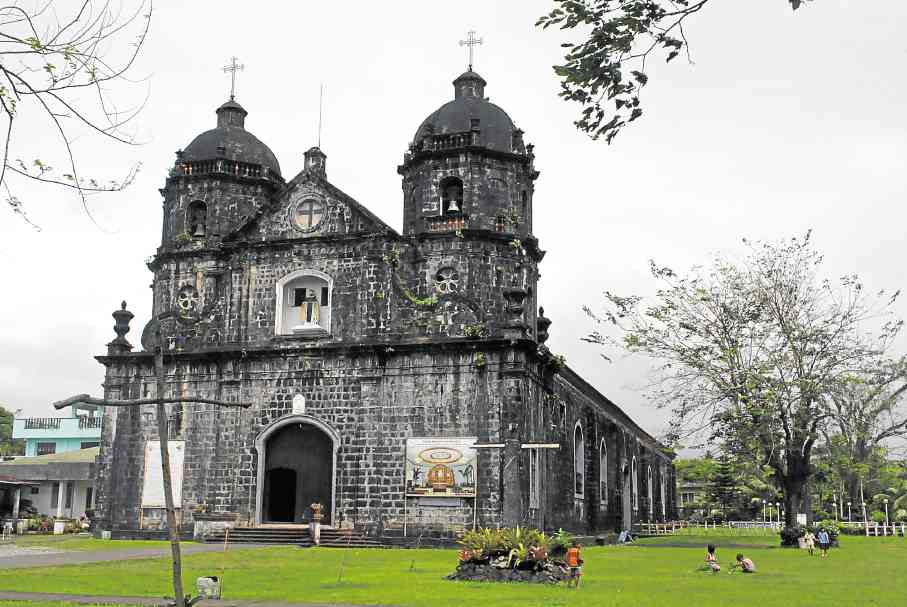 Move on to the Simala Shrine in Sibonga (which looks like a white European castle), and the Augustinian Church of St. Michael Archangel in Argao (whose priceless possession is a massive pipe organ—the only few existing pieces in the country that produces heavenly liturgical music).

The majestic baroque churches of Oslob and the newly-restored Patrocinio de Boljoon are a throwback to the glory days of Cebu as a center of faith and commerce.

Additional sites to Cebu’s southernmost tip are the churches of Santander and the St. Michael Archangel in Samboan which overlooks Tañon Strait separating the province from Negros Oriental.

It is worthy to note that the parishes in Cebu and the Visayas are located along the coastal areas as they also served as observation posts for threats from the sea, specifically Moro raiders and pirates.

Iloilo is an idyllic province that can rival the grandeur of Cebu’s houses of worship.

The Jaro Cathedral in Iloilo City, where Graciano Lopez Jaena was baptized, is a must-see, being the seat of one of the country’s pioneer archdioceses.

Also within the city is the Gothic-themed Molo Church that is known for its prominent use of women saints and situated in a district made famous by the pancit molo and the exquisite sinamay fabric weaving.

West of the city is an infinity of Spanish-built churches: Immaculate Conception Parish in Oton, St. John of Sahagun in Tigbauan, San Nicolas de Tolentino in Guimbal, and San Joaquin Church, which has a Rennaisance architecture mortuary chapel across.

Cap your Ilonggo prayground at the picturesque Sto. Tomas de Villanueva in Miagao, dubbed as a “fortress church” because of its massive wall, and is inscribed in the elite Unesco World Heritage List.

If you open your mind as you go through the drill of the Visita Iglesia, it can also be a reawakening of our soul as a Filipino people bearing a rich spiritual and cultural heritage.

Drive safely and have a meaningful and blessed Holy Week.