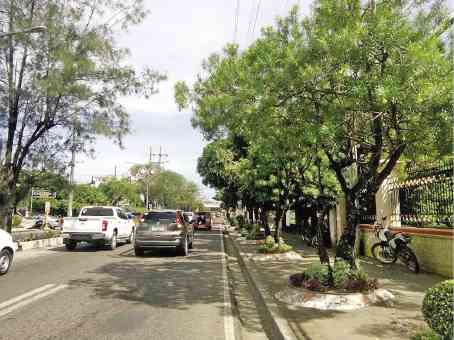 Trees need to be compatible with their environment to maximize their ability to survive and influence urban air quality, a new study has suggested.

Based on the findings, a team of Filipino scientists has come up with a “menu” identifying which species can withstand the air quality in seven of Metro Manila’s busiest thoroughfares: Edsa, Ortigas Avenue, Roxas Boulevard, Taft Avenue, Pasay Road, C3 and C5 Road.

The list was the product of a yearlong study which ended last year and looked at 47 tree species found on major roads. Of this number, 18 species were native or indigenous to the country.

“There is a notion that if you plant a tree, it helps the environment. But you need to plant the right tree that can adopt to the environment that we have. If we plant the wrong tree in a particular environment, if it’s not tolerant, it may die,” said Dr. Glenn Sia Su, the main proponent of the research.

Su was among the latest batch of 12 new Outstanding Young Scientists recognized last year by the National Academy of Science and Technology for his work in the field of Environmental Science.

The study showed that out of the 47 species planted along the capital’s seven main thoroughfares, 16 showed tolerance to the air pollution in a specific site.

More specifically, ipil-ipil, santol and balete trees can withstand the air quality on Edsa as they displayed an “intermediate tolerance” to air pollution in the area.

Trees that would thrive in another bustling road, Ortigas Avenue, were manga, balete and acacia.

On C3 Road, the native trees banaba and narra showed “intermediate tolerance” to air pollution in the area while on C5 Road, abnug and balete were expected to thrive.

Trees that were compatible with the conditions on Pasay Road were bignay and auili; bagilumbang, alagaw and talisay were suitable for Roxas Boulevard; while exotic trees Syzygium malaccense or Malay apple, Cratoxylum formosum or pink mempat and Ficus elastica or rubber fig were expected to survive despite the air pollution on Taft Avenue.

“The planting of tolerant or immediate tolerant tree species on the corresponding major roadsides of Metro Manila is recommended as these plants can withstand the stressors present in our atmosphere,” it said.

According to Su, their findings will be turned over to the Metropolitan Manila Development Authority for guidance in future tree-planting initiatives.

Much of the research work was done in the laboratory where the leaves collected from the mature trees were examined to determine their response to environment stressors using the air pollution tolerance index for plants.