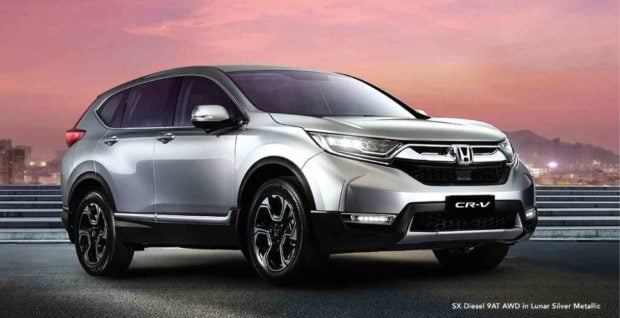 Diesel-powered automobiles are making a comeback.

After having lurked in the background as niche options for many years, they are now becoming wildly popular, especially in European markets where diesel variants have made up more than 50 percent of new vehicle sales.

Other markets, including the Philippines, are following suit considering that automotive manufacturers have been engineering solutions to increase both the fuel economy and horsepower of the diesel engine.

“We are confident that we will create the new benchmark for the future of SUVs,” said Honda Cars Philippines, Inc. president and general manager Noriyuki Takakaura.

Takakura said that in response to the growing SUV market in the Philippines, Honda will continue to introduce exclusive specifications that will cater to the unique requirements and needs of customers.

And the all new CR-V will pursue that direction.

“We’re getting used to automotive manufacturers extracting more from less, and if any type of vehicle stands to gain the most ground when it comes to reducing fuel consumption, it may be those in the increasingly popular SUV/crossover segment,” explains Doroteo “Tey” R. Sornet, Lica Group-Honda Rizal Autozone SVP and COO.

He adds that the updated Honda CR-V powered by an all-new, turbodiesel engine (a 1.6-liter engine equipped by an intelligent diesel technology electronic control or i-DTEC) is a prime example of that development.

“Indeed, the new Honda CR-V is making a very grand move. In fact, even being the leader in the compact SUV segment, Honda is now strengthening their supremacy by introducing a new variant powered by a diesel engine to cater to a wider variety of customers,” says Sornet.

According to ANC Group, the introduction of the diesel powered CR-V is a game changer as Honda Cars Philippines now has a contender that not only boasts of the best qualities of a diesel engine (three variants will be offered for the diesel CR-V aside from the gasoline powered one) but also the advantage of having three rows of seats for seven passengers.

The ANC Group that owns dealerships in San Pablo, Laguna, Lipa, Batangas, Zamboanga, Calamba, Laguna, Sta. Rosa, Laguna, says that one of the most significant advantages of vehicles equipped with a diesel engine (over its gasoline-powered counterparts) is more efficient engine capable of converting around 45 percent to 50 percent of the fuel energy to power.

“The launch of the diesel CR-V is set to go head to head with tough contenders like the Toyota RAV 4 and Mazda CX5.

“However, I can clearly see that Honda has another card up its sleeve—the new CR-V diesel variant.

“This will create a positive new perception that the CR-V is not just a family SUV but also an economical, and at the same time, environmental workhorse,” says Sornet.

Aside from equipping the model with a diesel engine option, the new Honda CR-V has also revived the third row seating feature.

“This new offering of the Honda CR-V, while being more compact in size, will definitely appeal to a huge number of consumers who might be considering buying a medium-size SUV,” believes Sornet.

“Having said that, I believe that the new Honda CR-V will not only make a huge dent in the small/compact SUV market, but will also be a big challenger to competitors offering bigger-sized SUVs,” he adds.