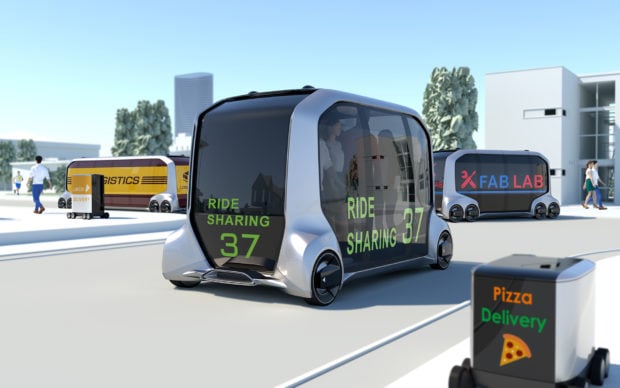 Self-driving buses aren’t new, but Toyota’s concept vehicle unveiled Monday aims to be more than just that: a mobile platform for e-commerce, ridesharing and medical services, for a start.

The Japanese auto giant’s president Akio Toyoda unveiled the new initiative at the Consumer Electronics Show in Las Vegas, seeking to get ahead of rivals offering single-use autonomous transporters.

The “e-Palette” vehicle platform features a boxy electric-powered minibus designed to handle deliveries or even bring retail services to consumers, but can also be used for ridesharing and other purposes.

“It is a flexible platform that can be adapted to a range of services,” Toyoda said, including ridesharing, retail, medical services or entertainment.

The media demonstration showed how the vehicle could deliver packages or even enable consumers to try on shoes or apparel.

The new initiative is part of an effort to transform Toyota from an automaker to a multifaceted “mobility” company, Toyoda said.

Partners in the project, which is set to be deployed “in the early 2020s,” include Amazon, Uber, Pizza Hut and China-based Didi. Rival Japanese automaker Mazda will also participate in development.

The company said it hopes to showcase the technology at the 2020 Olympics in Japan. JB

32 road trips you have to experience in your lifetime