Feeling the electricity in the Pinoy pulse 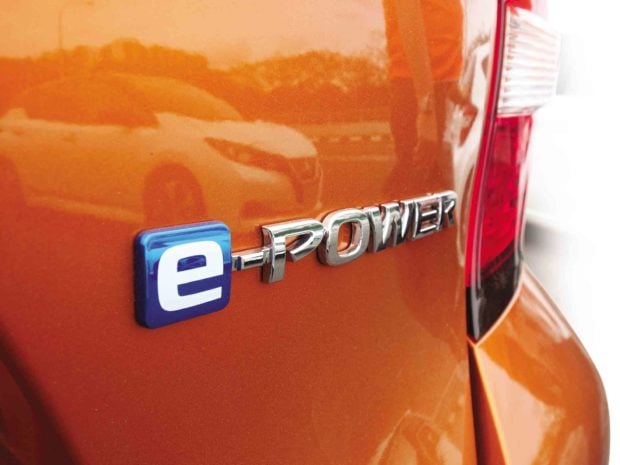 No matter if the Philippines’ power producers and distributors charge among the highest electricity rates in the Asian region, Filipinos are still among the region’s most eager buyers of electric vehicles (EVs). That is, if EVs were already available locally.

This was what local motoring scribes discovered when they traveled to Singapore this Feb. 6 for the Nissan Futures thought leadership platform.

An insight study, titled “Future of Electric Vehicles in Southeast Asia”, showed that Filipinos topped the list of the most eager EV buyers.

The Nissan-commissioned Frost & Sullivan study showed that, of the 1,800 respondents intending to buy a car, 37 percent of them would be open to EVs as their next purchase.

Malaysia, Vietnam, and Singapore rounded up the eagerness list with 37, 33, and 23 percent, respectively.

The study also revealed that for most customers, the source of electricity would be an important purchase criterion.

The study also showed that tax waivers would be the most important incentive for buyers to switch to EVs (75 percent), while 70 percent said the availability and ease of access to charging stations would be the deciding factor.

Priority lanes for EVs (56 percent), free parking (53 percent), and toll discounts (53 percent) were the other factors cited by buyers.

Yutaka Sanada, Nissan Motor Co. Ltd. regional SVP and head of operations committee for Asia and Oceania, remarked that Australia, Hong Kong, Malaysia, New Zealand, Singapore, South Korea and Thailand would be the countries in Asia and Oceania where the electric-powered Nissan Leaf would be initially introduced. 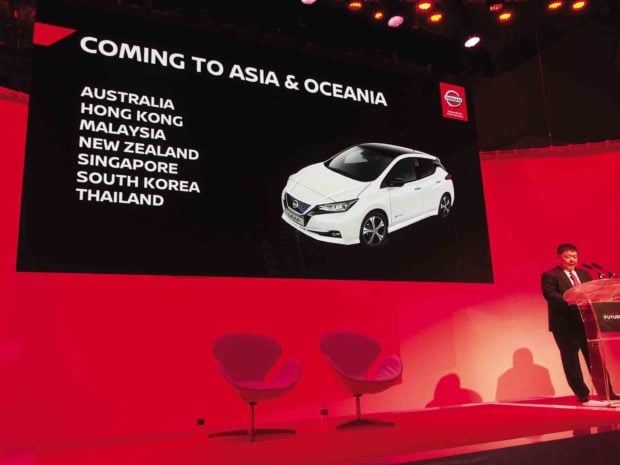 During the Feb. 7 test-drive event of the Leaf, the e-power Note, and the Note at the Nanyang Technological University track, Nissan Philippines president and managing director Ramesh Narasimhan expressed Nissan Philippines’ intention to bring in EVs in the country.

“Nissan’s vision is zero emissions, zero fatality. This event about electrification is all about understanding the zero emission part of it, and how can we enable bringing those type of products to the Philippines and also other markets sooner, and how we can make this more seamless to make sure the customers are able to enjoy what Nissan’s got to offer. Apart from electrification, we are here to showcase the Nissan Intelligent Mobility as well—how the technology of the car can enable us to drive safer, easier in a more comfortable way. It’s all about the future in the present, and how our life can be better from an automotive perspective,” he said.

Despite the millions of EVs already being sold and used in worldwide markets, and local EV advocates’ lobbying for the past 11 years, the Philippines is still in its infancy stage when it comes to motoring electrification.

Rommel T. Juan, Electric Vehicle Association of the Philippines president, told the attendees of the Nissan Futures conference that “now (would be the time) because the Philippines is ready for EVs and hybrids.” 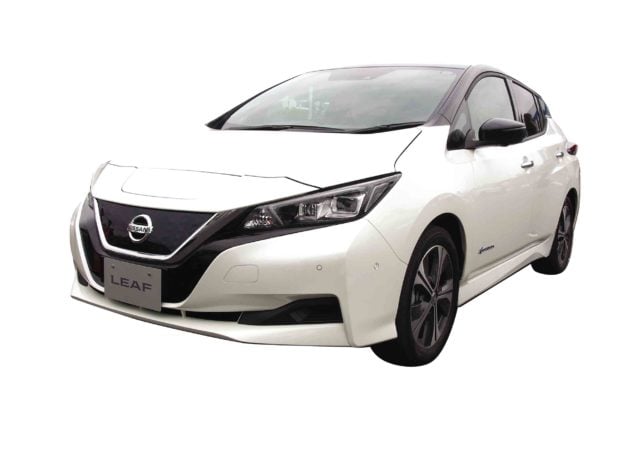 Juan stressed that excise taxes are now lower for hybrids and EVs. He added that “fast-charging stations are being set up,” and that “Filipinos want a better environment.”

He also revealed that QEV Philippines had already signed a memorandum of agreement with energy company Pilipinas Shell Petroleum, and with SM Supermalls for the installation of EV charging stations.

According to a Shell news release, QEV is a joint venture between Filipino businessmen Endika Aboitiz and and Spanish businessman Enrique Banuelos.

The project aims to put up the first EV fast-charging infrastructure in the country.

“Right now, EV charging stations are still included as part of the Board of Investment’s Investment Priorities Plan for 2017,” Penaranda disclosed.

“Many automobile companies are already studying the feasibility of bringing in their full-electric and hybrid cars into the country. Mitsubishi, Nissan and Toyota already displayed their cars they would like to bring in the country during last year’s Asean EV summit, and China’s EV maker BYD already offered EVs, which are readily available in the market,” said Peñaranda.

“Installations are under way. We have a couple (of stations) set for operations before mid-year. In our current agreement, we’ve set out to do 100 with Shell, and 100 with SM.” 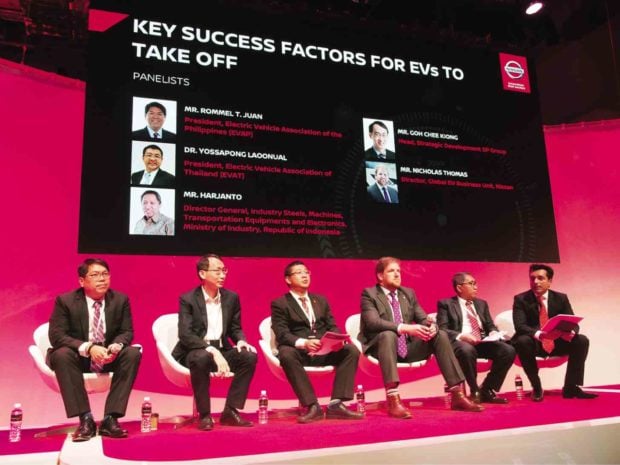 In the race to be the first mainstream EV supplier in the Philippines, Nissan seems to have a head start, if the Nissan Futures conference were to be the basis.

Nissan backs this up with its technology geared towards electric cars and autonomous vehicles blending in with human society, such as integrating EV power sources and supplies with buildings, vehicles communicating with each other, and road infrastructure.

Vehicle electrification for sustainable mobility has emerged as a primary focus for many major automakers, including Nissan.

Since 2010, Nissan said that it has led the way in this area with its best-selling Leaf EV, and has since added other zero emissions models such as the e-NV200 light commercial vehicle, and even developed innovative propulsion systems such as its sold oxide fuel cell technology.