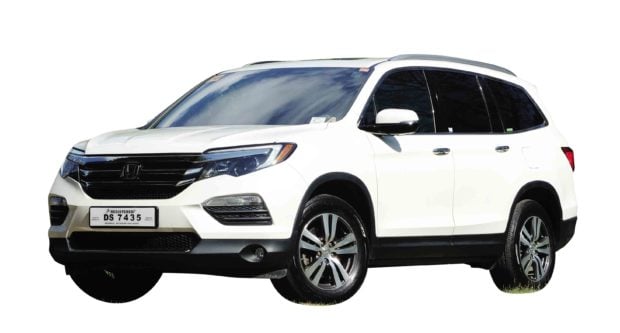 Truth be told, the Honda Pilot isn’t for everyone. It isn’t going to potentially steal sales from the likes of the Montero Sport, Toyota Fortuner, Isuzu MU-X, and Nissan’s upcoming Terra, their SUV based on the Navara.

It’s not going to poach sales from entry-level Lexus SUV variants either, and it doesn’t have the arrogant swagger of, say a Toyota Land Cruiser, or Nissan’s highly underrated Patrol Royale.

What it is, though, is a very relaxing, refreshing and highly comfortable long distance cruiser, built primarily for the wide, long highways and byways of the Americas.

It is, in fact, built in Lincoln, Alabama, and aside from the US, is sold only in a handful of markets such as the Middle East, Russia, Ukraine plus certain LHD countries in Central and South America.

The Pilot shares its platform with the US-spec Honda Oddysey minivan, and the Acura MDX.

The third-generation Pilot weighs 300 lbs less than its predecessor, with improvements in NVH isolation. 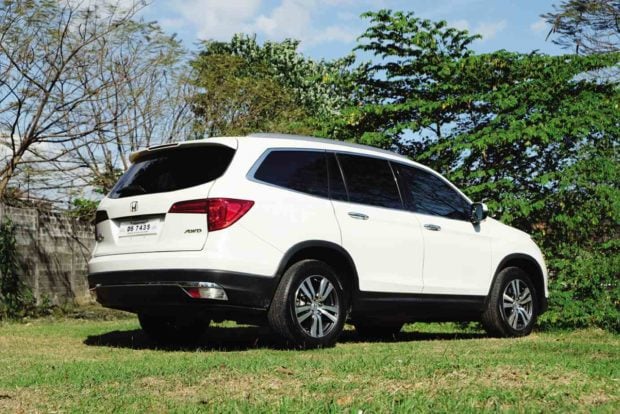 The revised V6 engine now features direct fuel injection to help improve the admittedly ghastly in-city fuel efficiency and reduce emissions levels while helping to deliver 280 hp and 353 Newton meters of torque, primarily to the front wheels, or to all four when added traction is needed via a 6-speed automatic transmission.

Inside, leather and soft plastics cover everything. The multi-zone automatic climate control keeps things cool even on the hottest of Philippine summers, and there’s even a TV/DVD player for the second and third row passengers.

The center console is huge; I almost lost my bag inside it.

The Pilot is best driven on a very long trip with at least five adults on-board. Take a trip to Pagudpud up north, or to Bicol down south; it’s that sort of vehicle. 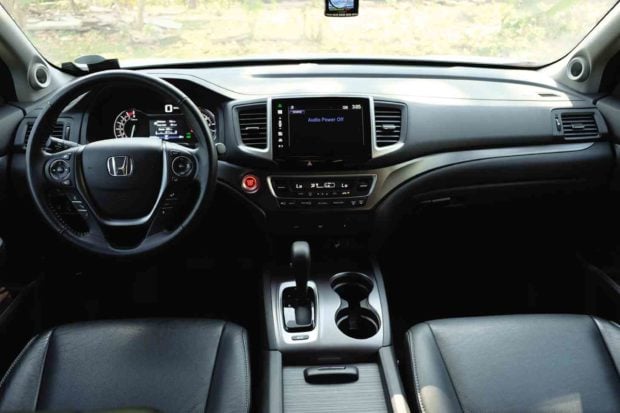 The dashboard has an abundance of active safety features.

And with Honda’s perfectly designed interior ergonomics and driving position, despite the Pilot’s large size, the drive and feeling of the car’s exterior dimensions are intuitive, making you feel comfortable and confident guiding this proverbial minibus.

As mentioned, in-city driving is ghastly: 3.75 kilometers per liter with the most careful of throttle prodding.

When the car was delivered, it actually read a flat 3 kilometers per liter. I’m surprised it hasn’t been banned and deported yet.

But everything must be given a chance to redeem itself, so off the Honda Pilot went, first on a relatively modest trip down south to Tagaytay. 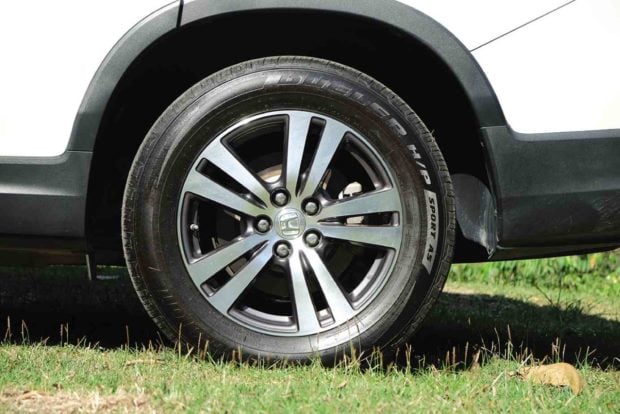 The 18-inch wheels shod with 245/60R18 tires look small on the large Pilot, but are great for comfort and stability.

Going up, the Pilot did about 8.8 kilometers per liter, which is surprisingly decent given its size and a curb weight just shy of 2,000 kg.

Going down Tagaytay, where traffic conditions where better, the Pilot was able to achieve a shade under 10 km/liter, which is impressive as the drive was rather fast-paced going to the Metro.

Because it’s an American SUV (with Japanese origins), the roomy interior is built for long stints: very comfortable, refined, and relaxing.

On bumpier provincial roads, the suspension gets busy as the Pilot throws its weight around. 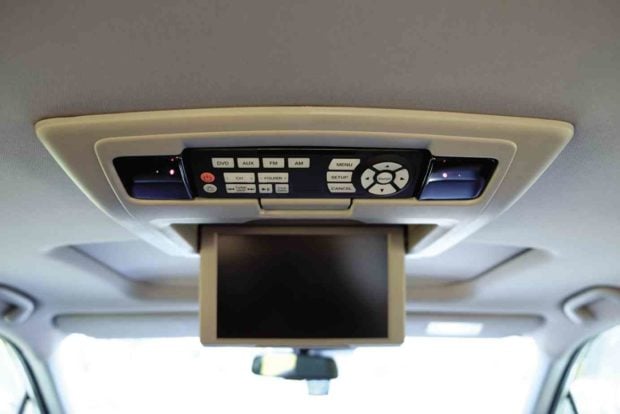 A TV/DVD player for second and third row passengers

Thankfully, despite a lot of body movement, the suspension never feels overwhelmed.

The light steering suits the Pilot’s behavior, yet retains a surprisingly responsive urgency to it.

Truly, the spirit of Honda lives on, even in a large SUV such as this.

Likewise the brakes, which delivered fade-free progressive and well-modulated performance on winding roads down south.

A few weeks later, a friend had taken delivery of a Honda Pilot, and we took it for a drive up north to Subic Bay. That’s approximately a 180-kilometer drive one way, making it roughly 360 kilometers back-to-back.

Throw in the amount of driving in and around Subic looking for scenic spots, plus an impromptu off-road light trail, and we easily covered over 400 kilometers on a single day’s worth of driving.

We felt refreshed even after spending 10-plus hours driving the Pilot.

On the highway, my friend decided to try out all of Honda’s active safety driving aids.

Thankfully, I wasn’t the one driving when we tried these safety systems; my (somewhat crazy) friend was so impressed, feeling happy about the purchase he had made.

Most people underestimate the importance of these active safety features, but on a long drive, when you’re a tad sleepy, the gentle rumbling on the steering wheel to remind you to steer straight and true, the flashing lights from the blind spot monitoring system, and the small corrections the steering wheel makes on its own to keep you within your lane really helps to remind you to stay focused on the task ahead if you’ve been driving for more than 4 hours straight. 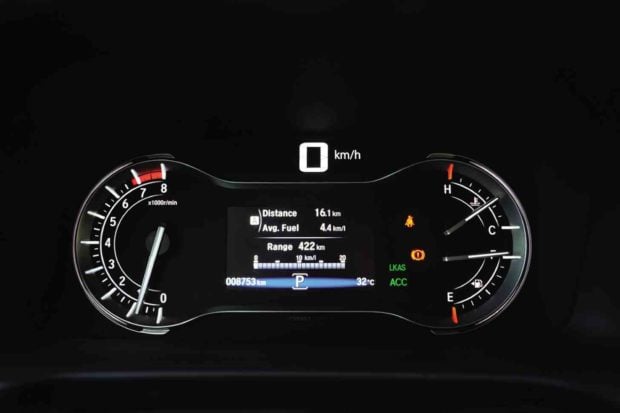 We were crazy enough to try the Pilot on a light off-road trail in Subic Bay.

Called the Pastolan Trail, it’s mostly rough roads, but with some very big rocks thrown in for good measure.

The Pilot has a modest 185-mm ground clearance, so our local guide was skeptical if we could even make it past the first set of rocks.

Careful driving and technique saw us halfway up before we had to turn around and go back home.

Fording depth is also a modest 450 mm, so the Pilot isn’t going to tackle some moderate to extreme off-road trails with tons of water crossings anytime soon.

That, plus the Pilot’s angle of approach and departure of 18 degrees and 19.7 degrees, respectively, means you’ll rip your bumpers apart before you actually get to anything exciting.

But, considering the Pilot is the quintessential SUV for soccer moms, it’s amazing we even got to where we went in the first place.

The drive home yielded the best surprise. The Pilot on a steady fast-paced cruise yielded just shy of 12 km/liter on the highway.

By the time we got home, we still felt relaxed and refreshed inside the big, comfy Honda Pilot.

If you buy a Pilot, make sure you take on the longest drive you can. That’s where the Pilot will really shine.