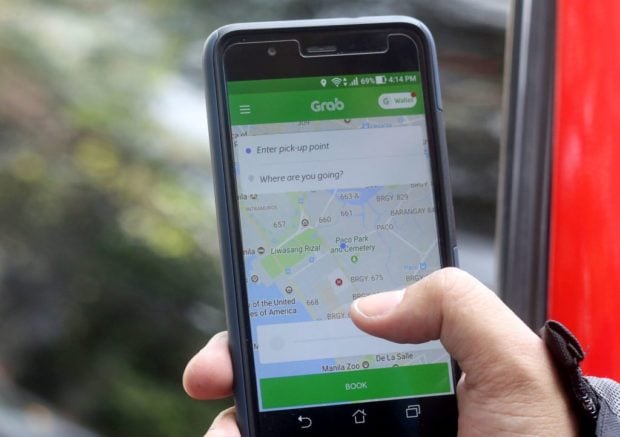 A commuter books a vehicle via ride-hailing app Grab in Metro Manila. (Photo by RICHARD A. REYES / Philippine Daily Inquirer)

Amid mounting complaints by commuters against drivers, and vice versa, ride-hailing giant Grab said on Tuesday it might impose charges on passengers who would cancel their bookings, in the same way that Uber had.

Toh said the company was keen on protecting not just its riders but also its driver-partners.

“Of course when passengers cancel, the driver you book is already en route to your location. They spend money on that; that’s time away from their business,” she said.

Uber used to impose charges based on how far the driver had already traveled before the trip’s cancellation, or when a rider cancels more than one ride within a short period of time.

Despite public impression that drivers are more likely to cancel bookings, figures from Grab show that drivers back off their commitments only 8 percent of the time, compared with 12 percent by passengers, according to Toh.

She said the company had yet to set the amounts to be charged, as it was still studying various schemes, adding that it would only impose fees “within the limits” of the waiting time—the time a passenger’s ride is supposed to show up at the pickup point.

Grab currently does not impose any penalty on passengers who cancel bookings within the standard waiting time of seven minutes for GrabCar and three minutes for GrabShare.

Passengers who cancel three bookings after the waiting period get “deprioritized,” which means they should expect to be served later than others in their succeeding bookings.

Grab currently allows its drivers to cancel 5 percent of their trips.

Those who cancel more than 10 percent may face sanctions such as suspension or blacklisting from the platform, Grab public relations manager Krhizzy Pasigan said.

Some patrons of the ride-hailing service expressed concern that some drivers might exploit the cancellation fees.

Twenty-two-year-old Julian Elona, who uses Grab often to get from Manila to Eastwood, Quezon City, said the ride-hailing company needed to first protect passengers from abusive drivers before implementing such a scheme.

“It might get to a point that if the driver and passenger disagree [on their arrangement], the driver might hold out on the rider who would then be forced to cancel and pay the fee,” Elona said.

“What if you’re faced with picky drivers who force you to cancel, or if you’re rushing and have no choice but to cancel your booking? It might be unfair for the passengers,” said Jazzmin Carilla, a 21-year-old public relations writer and frequent Grab user.

The commuter welfare group, National Center for Commuter Safety and Protection (NCCSP), said it recognized that drivers, too, had rights against passengers who frequently canceled their trips.

“However, [Grab] should first set guidelines on when it is acceptable to cancel a ride. Why should you be penalized if the driver cannot immediately fulfill your riding requirements?” said NCCSP head Maricor Akol.

“There must be a standard time allotment wherein passengers are allowed to cancel … [but] at the same time, [Grab] has to come out with a comprehensive plan to issue penalties so the riding public cannot renege on their bookings,” Akol added.

Grab, Hype, GoLag, Owto and Micab were recently allowed to operate in Metro Manila and other large urban areas, while Hirna is available in Pampanga province and the cities of Bacolod, Baguio, Cagayan de Oro, Cebu, Iligan, Davao and Iligan.

An Indonesian TNC, Go Jek, has also expressed interest in challenging Grab’s domination in the Philippines.

Aileen Lizada, board member of the Land Transportation Franchising and Regulatory Board, noted that Go Jek had been used to charging unregulated surge rates of up to five times in Indonesia.

“I told them that here, up to times two only. I asked them if they could survive. They said they need to study [Philippine regulations],” Lizada said.

“Go Jek is big, so we need to study [their application] well as we need to protect the local players,” she added. – By: Krixia Subingsubing