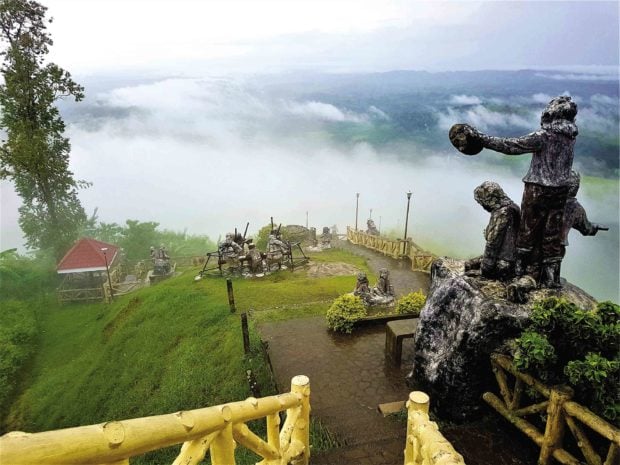 Up to the late 1990s, the upland province of Bukidnon lived up to the title of John Denver’s popular song, with emphasis on the word “rocky.”

Commuting then on an ordinary bus, the shortcut between the cities of Cagayan de Oro in the north and Davao in the south was like running through the gauntlet, what with the infinity of unpaved and dusty roads.

When the national highway was completely paved in the early 2000s, traveling the Davao-CDO corridor become a pleasurable experience—with the panoramic long and winding roads.

Most of the roads are undergoing expansion into four lanes to make it compliant with the standards by the public works department due to increased vehicular traffic in the once frontier area.

Still, even by public transport, travel is a breeze with the comfy aircon buses which are, believe it or not, far more advanced than the “rolling coffins” plying the main thoroughfares of Metro Manila.

A landlocked plateau, Bukidnon has no airport, and for this odyssey, we fly to Davao and take the northward journey.

After more than two hours of travel via the picturesque BuDa or Bukidnon-Davao Road, your first toilet break is the Overview Nature and Culture Park in Quezon town, a landscaped area that has a soothing vista of rolling hills and meandering roads.

At 915 meters above sea level, the viewdeck is often windswept and kissed by fog because of its altitude.

For a quick bite, pull over at the roadside Coffee Highway, a fast casual dining outlet known for its sugarcane juice and special coffee blend.

A few kilometers away is the Kiokong Eco-Tourism Area, an extreme adventure where one gets to camp at the vertical bivouac, a two-meter wide, 400-ft cliff ledge.

The reserve is dotted with limestone cliffs that make it a haven for rock climbers.

For a less buwis-buhay activity, you can trek down to what locals dub as “Bluewater,” a bluish subterranean icy natural cave pool where you can dip for a rejuvenating bath.

An unique spot in Maramag town is the Philippine Carabao Center which claim to fame is the dairy product outlet at the Central Mindanao University where guests can partake of their favorite products or bring home as pasalubong.

For those interested in farm tourism, this one should not be missed.

This once bucolic ranch town is now the province’s boomtown, commercial hub, and “bedroom” with its array of lodging facilities and small shopping malls.

Those who want a blend of country charm and modern comfort can hit the sack at Double M Hotel, arguably the most stylish in the city and the home of Bukidnon Roadhouse Cafe, Totsy’s Cakes and Pastries, and Tirso’s Deli and Roasters, all of which have been part of Valencia’s culinary history.

A must see is the placid Lake Apo, a 24-hectare rift framed by mountains ideal for rafting and fishing with its floating cottages.

Once hailed as the cleanest lake in Region 10, this upland body of water can be reached via a single motorcycle from the city terminal.

This interior town is off the beaten path, but the trip to Café sa Bukid, a cozy farm-themed resto that serves delectable locally-harvested food and drinks, is definitely worth the time.

Further inland is the village of the Talaandig, an indigenous group that has managed to preserve its tribal culture despite the strong influx of modernization.

Found in the settlements around Mt. Kitanglad Range Natural Park, guests can enter their ancestral domain, but only after a coordinated visit where they undergo the traditional welcome rituals, which includes among others, a sacrifice of a live chicken.

The community immersion is a unique experience that will give you a deep appreciation of their spirituality and way of life.

This provincial capital city is home to the iconic Monastery of Transfiguration, a hilltop pyramid-shaped Benedictine church designed by National Artist Leandro Locsin.

It offers a tranquil place where one can enjoy serenity in prayer and the beauty of nature.

The monastery is open to the public for masses, and the occasional breakfast with the monks where guests can savor the organic Monks Blend products.

Also within the city is the American-era picture-pretty capitol building, and the Kaamulan Park right behind, a 500-hectare greenery that abounds in pine trees, and is a sanctuary for diverse variety of flora.

An upcoming novelty attraction is the hobbit-inspired lodge by wild bird photographer Benjamin Maputi Jr., who established the award-winning Mt. Kitanglad Agri-Ecological Techno-Demo Farm and the Maputi Bird Preserve Camp, which are also in Malaybalay.

If you’re hunting for a colorful Instagrammable subject, this must be it. Standing proudly along the Sayre Highway in Impasugong town is the oversized replica of the panica, the native women’s headgear worn during special events.

Impasugong is also regarded as the tribal capital, as well as home of cowboys with its sprawling cattle ranches located in the town’s hinterlands.

Named after the province’s pioneering governor, this resort town was placed on the tourist map by the Dahilayan Adventure Park, which has Asia’s longest dual zipline—a two 840-m zipline with a 100-m drop.

It also has a 320-m and 150-m dual zipline for beginners, along with the ropes course, wall climbing, and the first extreme pendulum at Dropzone featuring a 120-ft freefall into a man-made lake.

Another magnet of the town is Kampo Juan, an adventure and camp whose centerpiece is the unicycle or bicycle on a 600-ft long cable at 100 feet above the ground, a 520-ft long zipline, a 110-meter hanging bridge, and a heritage house and eco lodge.

A very recognizable spot within M Fortich is Camp Philips, the sprawling pineapple plantation of Del Monte Philippines and the biggest of its kind in Asia.

Also within the town is Mangima Canyon Springs and Country Park, a 6-ha municipal resort surrounded by hills and mountains, designed for events meetings and recreation, with swimming pools, horseback riding field, and an off-road track for motocross.

After going through this mountain high route, the ideal exit point is Laguindingan Airport, which is about 45 minutes away from Cagayan de Oro City.

John Denver would have been pleasantly surprised to know something close to his beloved Colorado exists half a world away.