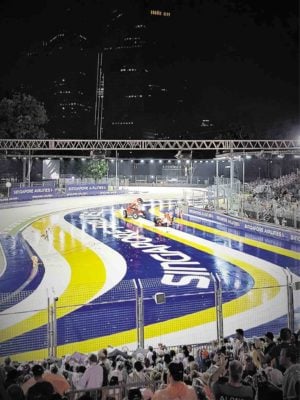 The 11th edition of the Singapore Grand Prix roars off at the Marina Bay Cirucit this coming weekend.

Fans from the world over will arrive in the Lion City, with the prospect of watching an epic battle unfold between the defending champ, Lewis Hamilton of Mercedes, and Sebastian Vettel of Ferrari.

The title chase has reached a fever pitch, and with only 30 points between the two protagonists, an error, DNF, or a mechanical failure from either of the two will surely give the other the much needed breathing room in the fight for the 2018 championship.

The year 2017 saw a similar scenario, where Vettel needed to keep Hamilton behind to keep the fight tight, but in the damp Singapore conditions, Vettel, who started on pole clashed with Max Verstappen, resulting in the #33 Red Bull collecting Kimi at turn 1, knocking them both out of the race.

Vettel also crawled to a halt two corners down with a radiator leak from his run-in with Verstappen.

This gave Hamilton the win and much needed points buffer and eventually win the 2017 crown.

This year promises much of the same on-track action, but it is the off-track events that really sets the Singapore GP apart from any other race in the Formula 1 calendar.

All three-day tickets allow access to concerts, fan interactive events, and of course, the support and main races at the Marina Bay Circuit.

The Singapore GP management has pulled out all the stops to make the weekend packed for all fans to enjoy.

For the mature set, there’s the Sugarhill Gang, Bjorn Again, and Simply Red.

Death defying juggling by Two Gentlemen from the UK, and Mathew Perry, also known as Bucket Boy, will entertain audiences with his brand of comedy and rhythmic music on anything he can get his hands on.

These, and so much more, are what the organizers of the Singapore GP have been bringing to the table for the past decade.

All races in the F1 calendar should train their sights towards Singapore to see how a perfect GP weekend is organized.

The Formula 1 2018 Singapore Airlines Singapore Grand Prix opens its gates to the public on Sept. 14 to 17.