The EcoSport compact SUV is powered by a 1.0-liter EcoBoost.

The refreshed Ford EcoSport launched more than a week ago had a curious new feature: under its stubby hood was an equally stubby engine, a mere 1.0 liter in displacement.

A generation ago in human terms, or about five in automotive terms, no self-respecting car above the most basic model would launch with an engine smaller than 1.6 liters, while midsize cars would need at least 2.0 liters.

But now, with turbocharging, direct injection, and in some cases, electric assist, smaller engines are becoming the norm.

The 1.0-liter Ford EcoBoost engine matches a conventional 1.6-liter in power and torque, with the torque peak occuring at a much lower rpm.

You won’t have to rev this engine too hard to get acceleration. In the Ford Fiesta, the tiny EcoBoost is a hoot to drive.

It would be interesting to see how the 1.0-liter EcoBoost would cope with the heavier weight of the EcoSport.

Luxury models were among the first to adopt the new technology.

Jaguar held the regional debut of its XJ at the Sepang race track some years ago, where the 2.0-liter turbo gasoline engine seemed surprisingly small, but acquited itself quite well, showing little sign of strain while pulling along the big Jag.

Having smaller engines improves performance and efficiency, but it does wreak havoc on the the model-naming conventions of the two leading German makers, BMW and Mercedes-Benz.

Previously, you could identify a BMW or Mercedes’ engine size by looking at its model designation: a 320 was a 3-Series with a 2.0-liter engine, while a 500E was an E-Class with a 5.0-liter engine.

Nowadays, with their displacement-equivalent badging, an E300 has a 2.0-liter four-cylinder, and a 540 has a 3.0-liter engine.

Given the technical superiority of a small turbocharged engine, there is still a certain satisfaction in revving up a normally aspirated engine.

The four-cylinder engine of the Porsche Boxster may be superior in power and torque, but the outgoing flat-six delivers a thrumming bass line that’s extra satisfying when it’s beating just a couple of inches behind your seat. 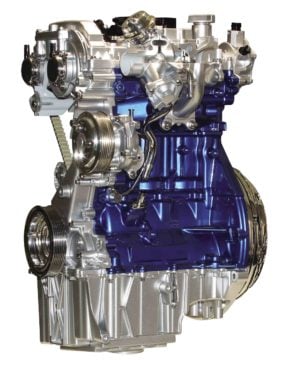 The EcoBoost’s footprint fits an A4 paper, small enough to stuff in the overhead luggage bin of a commercial passenger plane.

Ford has a four-cylinder EcoBoost option for the Mustang, but don’t mention that within earshot of an enthusiast, or a car-loving kid.

A similar type of downsizing has been taking place, too, in the pinnacle of motorsport, Formula 1.

The 1990s race cars were powered by 3.5-liter naturally aspirated engines. These were glorious, cost-no-object V10 and V12 engines, capable of revving beyond 14,000 rpm.

These gradually shrank to 3.0-liters, then to a V8 configuration in 2.4-liter displacement.

Then in 2014, the engines changed to 1.6-liter V6 turbo units with complex electric hybrid systems.

The turbocharging helped the cars go faster than ever, even while consuming less fuel, which was a worthwhile objective. But the change did rob F1 of one of its signature thrills: its sound.

When you hear—no, experience—a V8 Formula One engine, you won’t forget it. The new cars simply aren’t as exciting without that shrieking sound.

Is there a limit to how small the internal combustion engine can shrink?

The end goal is to have no engine at all. Even in the coming electric car era, they will probably survive, mainly as a range-extending recharging unit for the batteries. But there won’t be any start-up rumble or the high-rev hum.

When you can drive—or even ride in—a car with a big, naturally-aspirated engine, preferably with 8 or more cylinders, savor the moment. They’re an endangered species.